US jobless claims fall to lowest since pandemic started 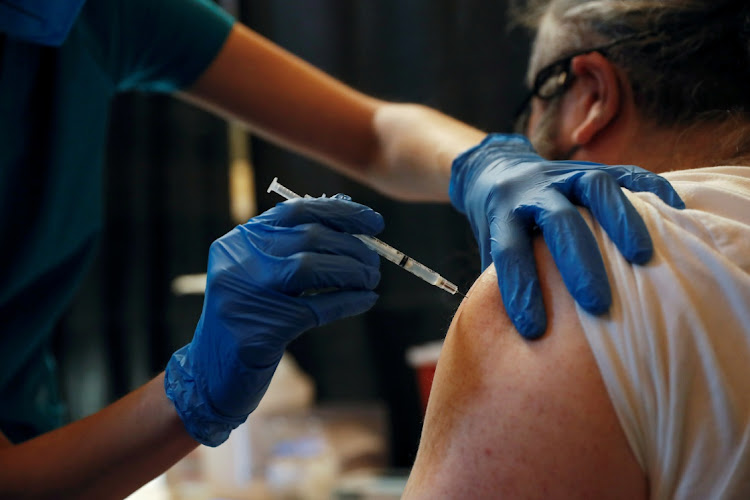 A medic give a Covid-19 vaccination in New York, the US, March 10 2021. Picture: REUTERS/SHANNON STAPLETON

Washington —  Applications for US unemployment benefits fell to the lowest in a year, signalling improvement for the labour market as more Americans get Covid-19 vaccinations and business restrictions ease in many states.

Initial claims in regular state programmes fell by 97,000 to 684,000 in the week ended March 20, labour department data showed Thursday. On an unadjusted basis, the claims decreased by 100,412 to 656,789 last week, led by sharp drops in Illinois and Ohio. The median estimate in a Bloomberg survey had called for 730,000 initial claims.

The initial claims figures suggest that job cuts are easing as businesses reopen and vaccine eligibility expands to more Americans. It was the first time claims dipped below 700,000 since the pandemic began. At the same time, the labour market recovery still has a long way to go — weekly claims remain above the peak during the last recession.

Also, jobless claims have been volatile as the pandemic dragged on. Rising fraud and an precedented surge in the number of people filing for unemployment benefits also created backlogs and delays.

“Claims definitely have peaked and they have been coming down, so they’re on the right path,” said Jennifer Lee, senior economist at BMO Capital Markets. Until initial claims are in the 300,000 range, however, “I’m not going to get overly excited”, she said.

Continuing claims — an estimation of the number of Americans collecting ongoing benefits — dropped by 264,000 to 3.87-million in the week ended March 13.

While the recovery is progressing more quickly than expected, some sectors hit hardest by the virus remain weak, Federal Reserve chair Jerome Powell said in remarks before Congress earlier this week.

“We welcome this progress, but will not lose sight of the millions of Americans who are still hurting, including lower-wage workers in the services sector, African Americans, Hispanics, and other minority groups that have been especially hard hit,” Powell said in prepared remarks during a House financial service committee hearing on Tuesday.

US GDP rose at a 4.3% annualised rate in the fourth quarter, the commerce department’s third estimate showed on Thursday. Corporate profits fell 1.4% in the final three months of the year.

Infrastructure, ‘green spending’ and tuition reductions will be among measures to be submitted to the US president
World
3 weeks ago

While an effort to raise the wage from $7.25  without Republican votes was blocked in the Senate, congressional Democrats are likely to try again
World
1 month ago
Next Article