While the White House has rejected an outright wealth tax, its current thinking does target the wealthy 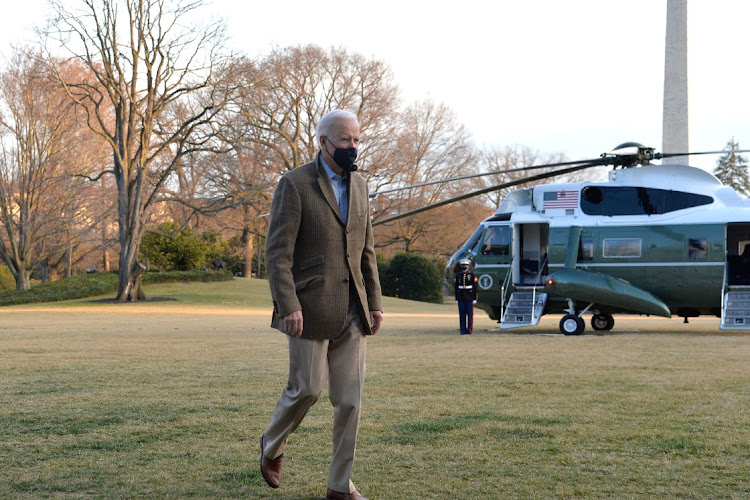 US President Joe Biden walks over to members of the media on the South Lawn of the White House in Washington, the US, on March 14 2021. Picture: BLOOMBERG/UPI/MIKE THEILER

Washington — President Joe Biden is planning the first major federal tax increase since 1993 to help pay for the long-term economic programme designed as a follow-up to his pandemic-relief bill, according to people familiar with the matter.

Unlike the $1.9-trillion Covid-19 stimulus act, the next initiative, which is expected to be even bigger, will not rely just on government debt as a funding source. While it has been increasingly clear that tax hikes will be a component — treasury secretary Janet Yellen has said at least part of the next bill will have to be paid for, and pointed to higher rates — key advisers are now making preparations for a package of measures.

With each tax break and credit having its own lobbying constituency to back it, tinkering with rates is fraught with political risk. That helps explain why tax hikes since Bill Clinton’s signature 1993 overhaul stand out from the modest modifications done since.

For the Biden administration, the planned changes are an opportunity not just to fund key initiatives like infrastructure, climate and expanded help for poorer Americans, but also to address what Democrats argue are inequities in the tax system itself. The plan will test both Biden’s capacity to woo Republicans and Democrats’ ability to remain unified.

“His whole outlook has always been that Americans believe tax policy needs to be fair, and he has viewed all of his policy options through that lens,” said Sarah Bianchi, head of US public policy at Evercore ISI and a former economic aide to Biden. “That is why the focus is on addressing the unequal treatment between work and wealth.”

While the White House has rejected an outright wealth tax, as proposed by progressive Democratic Senator Elizabeth Warren, the administration’s current thinking does target the wealthy.

The White House is expected to propose a suite of tax increases, mostly mirroring Biden’s 2020 campaign proposals, according to four people familiar with the discussions.

The tax hikes included in any broader infrastructure and jobs package are likely to include repealing portions of President Donald Trump’s 2017 tax law that benefit corporations and wealthy individuals, as well as making other changes to make the tax code more progressive, said the people familiar with the plan.

The following are among proposals currently planned or under consideration, according to the people, who asked not to be named as the discussions are private:

An independent analysis of the Biden campaign tax plan done by the Tax Policy Center estimated it would raise $2.1-trillion over a decade, though the administration’s plan is likely to be smaller. Bianchi earlier in March wrote that congressional Democrats might agree to $500bn.

The overall programme has yet to be unveiled, with analysts pencilling in $2-trillion to $4-trillion. No date has yet been set for an announcement, though the White House said the plan would follow the signing of the Covid-19 relief bill.

An outstanding question for Democrats is which parts of the package need to be funded, amid debate over whether infrastructure ultimately pays for itself — especially given current borrowing costs, which remain historically low. Efforts to make the expanded child tax credit in the pandemic-aid bill permanent — something with a price tag estimated at more than $1 trillion over a decade — could be harder to sell if pitched as entirely debt-financed.

Democrats would need at least 10 Republicans to back the bill to move it under regular Senate rules. But GOP members are signalling they are prepared to fight.

“We’ll have a big robust discussion about the appropriateness of a big tax increase,” Senate minority leader Mitch McConnell said in February, predicting Democrats would pursue a reconciliation bill that forgoes the GOP and would aim for a corporate tax even higher than 28%.

Kevin Brady, the top Republican on the House ways and means committee, said, “There seems to a be a real drive to tax investment of capital gains at marginal income rates,” and called that a “terrible economic mistake”.

While about 18% of the George W Bush administration’s tax cuts were allowed to expire in a 2013 deal, and other legislation has seen some increases in levies, 1993 marks the last comprehensive set of increases, experts say. That bill passed on a two-vote margin in the House and required the vice-president to break a tie in the Senate.

“I don’t think it is an understatement to say the current partisan environment is more severe than 1993,” said Ken Kies, MD of the Federal Policy Group, a former chief of staff of the congressional Joint Committee on Taxation. “So you can draw your own conclusions” about prospects for a deal this year, he said.

Still, there could be some tax initiatives Republicans could get behind. One is a shift from a gasoline tax to a vehicle-miles-travelled fee to help fund highway projects.

Another is more money for Internal Revenue Service enforcement — a way to boost revenue without raising rates. Estimates have found that for every additional $1 spent on IRS audits, the agency brings in an additional $3 to $5.

Democrats are also looking to revise tax laws that they say don’t do enough to stop US companies from shifting jobs and profits offshore as another way to raise revenue, one aide said. Republicans could potentially support incentives, though it’s unclear whether they’d back penalties.

White House officials including deputy director of the National Economic Council, David Kamin — who wrote a 2019 paper on “Taxing the Rich” — are in the process of fleshing out the Biden tax plans.

As for timing, if passed, tax measures would likely take effect in 2022 — though some lawmakers and Biden supporters outside the administration have argued for holding off while unemployment remains high due to the pandemic.

Legislators have their own ideas for tax reforms. Senate finance committee chair Ron Wyden wants to consolidate energy tax breaks and require investors to pay taxes regularly on their investments including stocks and bonds that have unrealised gains.

“A nurse pays taxes with every single pay cheque. A billionaire in an affluent suburb on the other hand can defer paying taxes month after month to the point where their paying taxes is pretty much optional,” Wyden told Bloomberg in an interview. “I don’t think that’s right.”

Warren has pitched a wealth tax, while House financial services committee chair Maxine Waters has said she would like to consider a financial-transaction tax.

Democratic strategists see the next package as effectively the last chance to reshape the US economy on a grand scale before lawmakers turn to the 2022 midterm campaign.

“Normally, the party in power gets one or two shots to do major legislative packages,” said Chuck Marr, senior director of federal tax policy at the left-leaning Center on Budget and Policy Priorities. “This is the next shot.”

Joe Biden moves to stand up to China

Aid package of $1.9-trillion is seen as among the most expansive legislative achievements in decades
Opinion
3 months ago
Next Article