Lula da Silva criticises privatisations, central bank autonomy and asset sales by state-run oil firm Petrobras, saying 'they should be afraid of me' 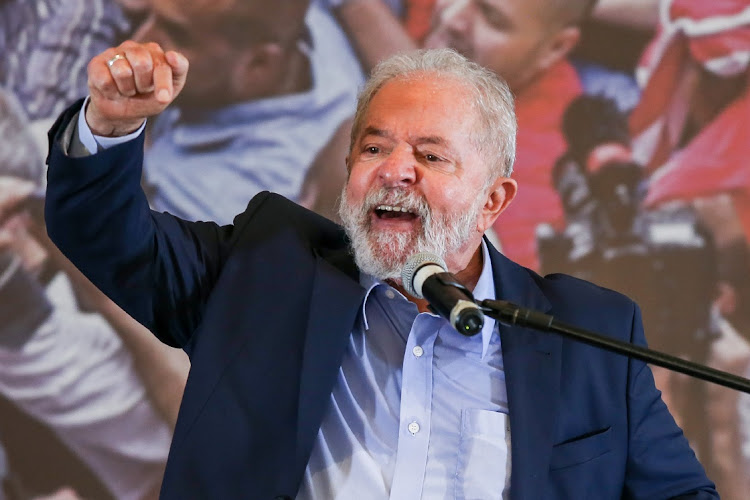 São Bernardo do Campo —  Former Brazilian president Luiz Inacio Lula da Silva set the stage on Wednesday for a likely 2022 presidential run, using his first speech since his graft convictions were annulled to blast President Jair Bolsonaro's handling of the pandemic and economy.

Lula, whose corruption convictions were overturned by a Supreme Court justice on Monday allowing him to return to political office, said he had not decided whether to run in next year's election. But his attacks on Bolsonaro, and the format of the event, had the clear feel of a campaign launch.

“This country is disorganised and falling apart because it has no government,” he told the audience at the metalworkers union in São Bernardo do Campo, comparing the current economic crisis to strong growth and falling inequality when he led Brazil from 2003 until 2011.

“Health, jobs and justice for Brazil,” read a banner hanging above the stage at the union, where Lula da Silva's political career took off as he organised nationwide strikes in the 1980s.

Lula da Silva attacked Bolsonaro directly for his record in handling the coronavirus pandemic, especially for delays in obtaining vaccines and for the president's public dismissal of their effectiveness.

Brazil has lost nearly 270,000 people to Covid-19, the worst death toll outside the US, as local variants push the country's outbreak into its worst phase yet.

“Many of these deaths could have been avoided,” Lula said.

Within hours of Lula's criticism, Bolsonaro and aides appeared masked at an official event in Brasilia — a rare sighting for the president, played down the gravity of the virus and said he would refuse a vaccine.

At the event, Bolsonaro defended his government's handling of the pandemic, saying Brazil would have 400-million vaccine doses by the end of this year.

“We were tireless from the first moment in fighting the pandemic,” he said.

In his speech, Lula da Silva cast himself as a veteran statesman eager to set the country on the right track, stressing his respect for the free press, business leaders and the military, while calling for a broad coalition to defeat Bolsonaro.

“I was called 'conciliatory' when I governed,” he said. “I'm open to talking with everyone.”

“Those who are buying things from Petrobras had best be afraid, because we can change a lot,” Lula da Silva said. “If the market wants to live off us selling national patrimony, then they should be afraid of me.”

A survey by pollster Real Time Big Data, released by CNN Brasil on Wednesday, showed both Lula da Silva and Bolsonaro with the support needed to reach a second-round vote.

A key takeaway of the election is the complete disarray of the Workers’ Party and the emergence of a new left, one analyst says
World
10 months ago

Covid-19 has paradoxically driven down poverty and inequality, at least in the short term
Business
1 year ago
Next Article