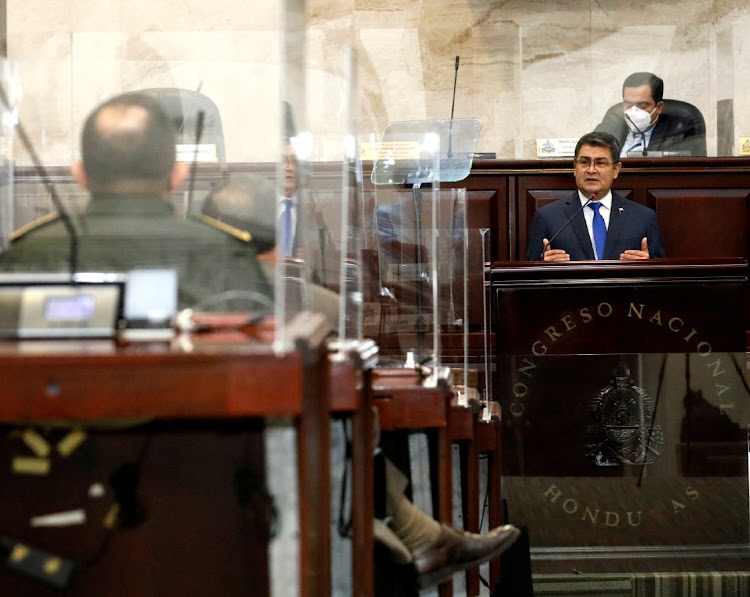 Tegucigalpa — Honduran President Juan Orlando Hernandez said this week that allegations by US prosecutors of his involvement with organised crime could affect co-operation with Washington in fighting drug trafficking.

US prosecutors, in a federal court filing in New York on February 5, said Hernandez used Honduran law enforcement and military officials to protect drug traffickers as part of a plan “to use drug trafficking to help assert power and control in Honduras”.

US prosecutors have said Hernandez accepted a million-dollar bribe from Mexican drug lord Joaquin “El Chapo” Guzman, who was convicted in 2019 and is serving a life sentence in a US prison.

Hernandez has denied the allegations and he has not been charged with a crime.

Hernandez, while speaking to the Honduran Congress on Wednesday, said that members of the “Los Cachiros” cartel falsely accused him in an effort to seek shorter prison sentences. He warned US officials that believing these allegations could compromise joint security efforts between Washington and Tegucigalpa.

“If certain offices in the US make the mistake of rewarding drug traffickers who give false testimony, instead of increasing their penalties ... then the battle that we have jointly waged with our allies against drug trafficking may become unsustainable because there will be loss of trust,” Hernandez said.

He added that if Washington takes the accusations against him seriously, “it will mean that sooner or later effective co-operation systems will inevitably collapse”.

Hernandez, who has been in power since 2014, is a close US ally in Central America. Yet, the accusations against him pose a challenge for the Biden administration, which has promised to invest $4bn into Central America to address the root causes of migration from the region.

Earlier this week, a group of Democratic senators introduced legislation to impose sanctions on Hernandez for corruption and human rights abuses and to suspend US security assistance for the Honduran police and military.

Some of Trump’s most fervent supporters, 200 of whom have been charged, have moved quickly to cast blame on the president and his rhetoric
World
1 month ago