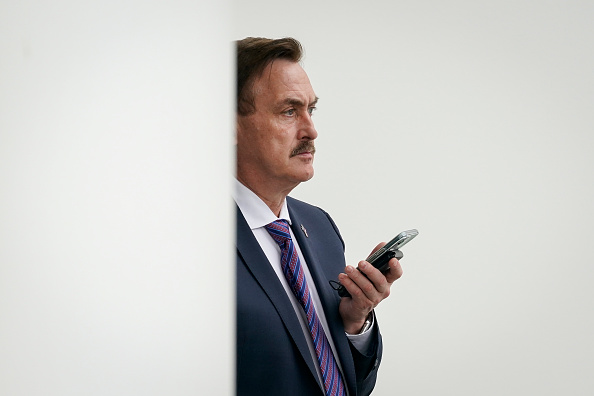 MyPillow CEO Mike Lindell waits outside the West Wing of the White House in Washington, DC, the US, January 15 2021. Picture: GETTY IMAGES/DREW ANGERER

Lindell, an outspoken Trump ally whose pillows were endorsed by the former president, repeated the bogus election-conspiracy theory for months despite knowing that no such fraud had occurred, Dominion Voting Systems said in a suit filed on Monday in federal court in Washington.

Dominion claims Lindell increased sales as much as 40% by pitching the “big lie” about the election on conservative media outlets, issuing promotional codes for his products like “FightForTrump,” “45” and “QAnon”, the name of another debunked conspiracy theory that contends leading Democrats and celebrities are part of a satanic cult of sex-trafficking paedophiles. In 2019, MyPillow’s revenue exceeded $300m, according to the lawsuit.

The complaint is the latest in a series of multibillion-dollar court actions taken by voting-machine companies against high-profile Trump supporters, including Rudy Giuliani and Sidney Powell, for spreading disinformation about voter fraud. Earlier in February, Fox cancelled the Lou Dobbs Tonight show a day after the network and Dobbs were named in a $2.7bn suit by Smartmatic. Fox, Dobbs and other defendants called those claims meritless and have filed motions to dismiss the suits.

Dominion warned Lindell in several letters in December and January to stop making false accusations about the company, according to the lawsuit. Lindell allegedly continued to do so, including by sponsoring the “March For Trump” bus tour across the US that advertised the January 6 rally in Washington to protest against the election results. That rally turned into a deadly riot at the Capitol.

Twitter banished Lindell in late January after persistently tweeting that Trump was the real winner of the presidential election, while retailers including Kohl’s and Bed Bath & Beyond dropped MyPillow from their stores.

“Despite repeated warnings and efforts to share the facts with him, Mr Lindell has continued to maliciously spread false claims about Dominion, each time giving empty assurances that he would come forward with overwhelming proof,” Dominion CEO John Poulos said in a statement. “These claims have caused irreparable harm to Dominion’s good reputation and threatened the safety of our employees and customers.”

In a phone interview on Monday, Lindell doubled down on his claims. He compared Dominion to “Nazi Germany” and said the lawsuit is part of an effort “to wipe out Mike Lindell’s voice”. He said he’d received death threats that he attributed to China or other foreign elements that conspired with Dominion.

“These machines were built to steal elections,” said Lindell, 59. “I’m not a stupid guy. If I didn’t have 100% evidence, I wouldn’t be doing this.”

To bolster its case against Lindell, Dominion included in its complaint false claims he’d made about his products. In 2016, MyPillow paid almost $1m in penalties and made a $100,000 donation after 10 California counties filed consumer-protection complaints alleging he falsely advertised his pillows as a cure for insomnia, restless leg syndrome and other ailments.

“Rather than approving Lindell’s plant extract as a treatment for Covid-19, the FDA issued a warning letter to its marketers, writing that the product was ‘unapproved’ and was being sold in violation of the law, and requesting that they ‘take immediate action to cease the sale’ of the product,” Dominion said.

Denver-based Dominion says Lindell got help in promoting his claims from other vocal Trump supporters. Powell and Georgia lawyer L Lin Wood alleged Dominion conspired with corrupt election workers and foreign agents to flip millions of votes from Trump to Joe Biden, who won the election by 7-million ballots. But numerous hand recounts of paper ballots have proved that Dominion’s machines got the count right, according to the suit.

“The contrary ‘evidence’ put forward by Lindell’s allies — including Sidney Powell, L Lin Wood, and others — was deliberately misrepresented, manufactured, cherry-picked, and sourced from con artists and conspiracy theorists who were judicially determined to be ‘wholly unreliable’,” Dominion said.

The voting-machine company argues Lindell has only doubled down on the false claims after being presented with evidence against them, using the company’s legal backlash to further drum up support from customers.

The CEO “sells the lie to this day because the lie sells pillows” and “whines” about being “cancelled” instead of admitting he was wrong, according to the complaint.

Various probes have been launched, but it is hard to keep partisan politics out of them
Opinion
5 months ago
Next Article