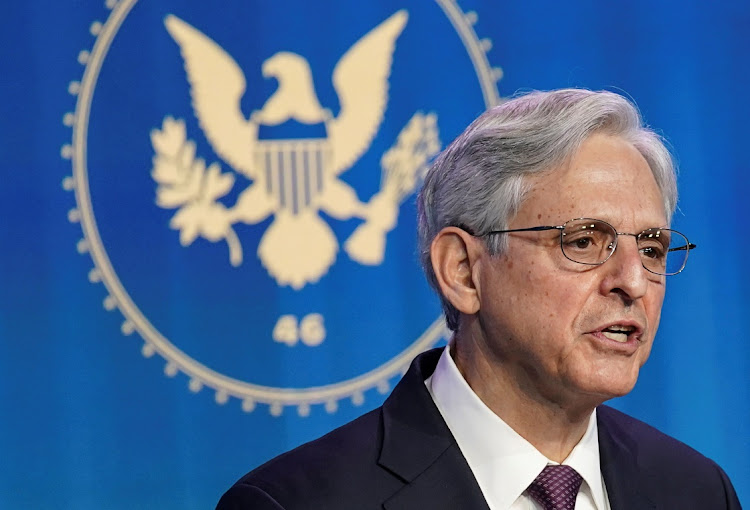 Merrick Garland, President Joe Biden’s nominee for attorney-general, is pledging he’ll take the lead in prosecuting white supremacists and others who stormed the  US Capitol on January 6.

“If confirmed, I will supervise the prosecution of white supremacists and others who stormed the Capitol on January 6 — a heinous attack that sought to disrupt a cornerstone of our democracy: the peaceful transfer of power to a newly elected government,” Garland said in an opening statement prepared for his confirmation hearing on Monday before the Senate judiciary committee.

Garland also signalled he’ll make decisions independently from Biden. “The president nominates the attorney-general to be the lawyer — not for any individual, but for the people of the US,” he said in the brief prepared testimony of less than three pages.

Former president Donald Trump openly pressed his attorneys-general, Jeff Sessions and William Barr, to protect him and his associates from prosecution and to go after his political enemies. Biden has said he’ll let his attorney-general make the tough calls on touchy matters — including pending investigations of his son, Hunter Biden, and inquiries touching on Trump.

In the testimony released on Saturday night, Garland indicated that, if confirmed, he’ll seek to restore policies and practices the department developed before the Trump administration, including those that the nominee said protect the agency “from partisan influence in law enforcement investigations”, those that “strictly regulate” communications with the White House and those that respect the professionalism of career employees.

Just getting a hearing for the cabinet post will be vindication for Garland almost five years after Senate Republicans blocked consideration of his nomination to the supreme court by former president Barack Obama. This time, Garland has bipartisan support and is expected to be confirmed.

The January 6 insurrection has only added to a roster of politically charged issues that Garland will be asked about when he finally has his confirmation hearing.

Garland made no reference in the testimony to calls for him to consider criminal charges against Trump, a possibility that has been advanced not only by Democrats but also by Senate Republican leader Mitch McConnell.

After joining most Republicans in blocking the former president’s conviction in his second impeachment trial in February, McConnell took to the Senate floor to denounce Trump as “practically and morally responsible” for the riot and pointedly added that former presidents can be subject to criminal and civil litigation. Trump “didn’t get away with anything yet — yet,” he said.

In the testimony, Garland also said  the justice department’s civil rights mission is “urgent because we do not yet have equal justice”.

“Communities of colour and other minorities still face discrimination in housing, education, employment, and the criminal justice system; and bear the brunt of the harm caused by pandemic, pollution, and climate change,” said Garland, who has been a judge on the US Court of Appeals for the District of Columbia since 1997.

During his previous time at the department, Garland oversaw high-profile domestic terrorism prosecutions, including for bombings in Oklahoma City and at the 1996 Atlanta Olympics.

He first served in the department as a special assistant in president Jimmy Carter’s administration before going into private practice. He returned to the department for a brief stint in 1989 as an assistant US attorney.

Biden has nominated Lisa Monaco to be deputy attorney-general and Vanita Gupta as associate attorney-general, rounding out the leadership team. Monaco spent more than a decade at the justice department and was homeland security adviser in the Obama administration. Gupta headed the department’s civil rights division under Obama.

The judiciary committee has yet to schedule confirmation hearings for Monaco and Gupta.

US Senate approves Joe Biden nominee to lead the Pentagon

The report, if critical of the crown prince, however, could further strain relations with the US over the murder of the journalist and Saudi Arabia ...
World
8 months ago
Next Article

US jobless claims jump to a four-week high

US jobless claims jump to a four-week high