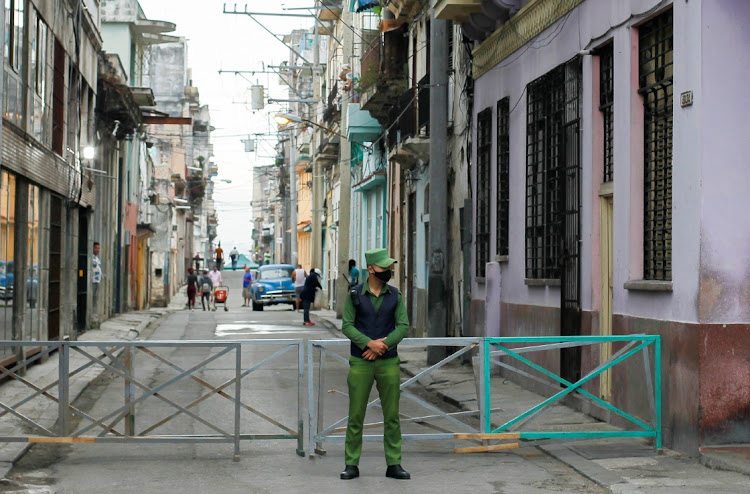 A policeman stands in front of a street in quarantine amid concerns about the spread of Covid-19 in Havana, Cuba, February 1 2021. Picture: REUTERS/STRINGER

Havana — In a major reform of the state-dominated economy, the Cuban government will allow small private businesses to operate in most fields, eliminating its limited list of activities, state-run media reported on Saturday.

The measure, coming as the Caribbean island seeks to recover from an economic slump, will expand the field from 127 activities to more than 2,000, labour minister Marta Elena Feito Cabrera was quoted as saying. She spoke at a council of ministers meeting that approved the policy.

She said there would be 124 exceptions, but the media reports provided no details.

Reform-minded Cuban economists have long called for the role of small business to be expanded to help jump-start the economy and to create jobs.

The economy has stagnated for years and contracted by 11% in 2020, due to a combination of the coronavirus pandemic that devastated tourism and tough US sanctions. Cubans have been dealing with a scarcity of basic goods and endless lines to obtain them.

The crisis has forced a series of long promised but stalled reforms, from devaluation of the peso and reorganisation of the monetary system to some deregulation of state businesses and foreign investment.

“The self-employed are not going to have it easy in this new beginning due to the complex environment in which they will operate, with few dollars and inputs in the economy,” said Pavel Vidal, a former Cuban central bank economist who teaches at Colombia’s Pontificia Universidad Javeriana Cali.

“But with the ingenuity of the Cuban and the sophistication of the parallel market, they will be able to take off little by little,” he added.

President Miguel Diaz-Canel said in 2020 the country faced an international and local crisis and would implement a series of reforms to increase exports, cut imports and stimulate domestic demand.

He said the measures would include “the improvement of the non-state sector, with immediate priority in the expansion of self-employment and removal of obstacles.”

The non-state sector — not including agriculture with its hundreds of thousands of small farms, thousands of co-operative and day labourers — is composed mainly of small private businesses and co-operatives; their employees, artisans, taxi drivers and tradesmen.

The labour minister said there were more than 600,000 people in the sector, about 13% of the labour force. They are all designated as self-employed and an estimated 40% depend mainly on the tourism industry or work in public transportation.

Over the past six months the government has also moved to grant small businesses access to wholesale markets and to import and export, though only through state companies.

On Tuesday, the US started requiring proof of negative Covid-19 results before allowing visitors to fly in from other nations
World
8 months ago

The case is being hailed as a legal milestone in a country where hundreds of Afro-Ecuadorean families have lived in slave-like conditions for more ...
World
8 months ago

Ecuador’s bonds pummeled ahead of election

Polls point to a lead for left-leaning economist Andrés Arauz, who has pledged to tear down an IMF agreement and increase social spending
World
8 months ago

Moïse maintains that his five-year term began when he was sworn in on February 7 2017, but the opposition says the clock started ticking in 2016
World
8 months ago
Next Article