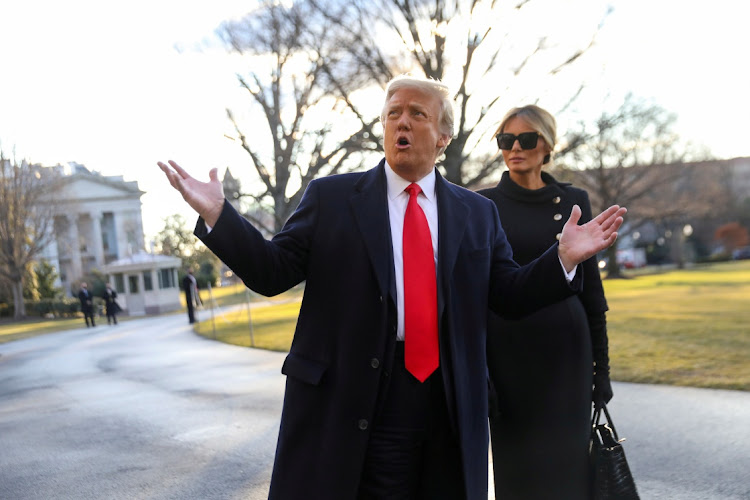 Former US president Donald Trump gestures as he and Melania Trump leave the White House in Washington, the US, January 20 2021. Picture: REUTERS/LEAH MILLIS

Washington  — Former president Donald Trump's lawyers said on Tuesday the US Senate lacks the authority to conduct his impeachment trial now that he has left office, while the Democratic legislators due to serve as prosecutors called him singularly responsible for the deadly January 6 attack on the Capitol.

Trump's legal team and the nine House of Representatives Democrats set to prosecute him filed briefs with the Senate one week before the trial is scheduled to begin.

His lawyers focused on an argument that last week won the support of 45 of the 50 Republicans in the 100-seat Senate in a failed vote to dismiss the case because Trump is a private citizen, having left office on Jan. 20.

Trump's team also denied he had fomented violence, saying in their 14-page brief that his remarks to supporters shortly before they stormed the Capitol that Democrats contend incited violence were protected under the US constitution's First Amendment right to free speech.

Challenging the case against Trump on the grounds that the Senate lacks constitutional authority to put a former president on trial would enable his fellow Republicans to vote against conviction without directly defending his incendiary remarks.

The House Democrats, in their pretrial brief, anticipated that post-presidency argument and rejected it. The Democrats urged senators to convict Trump — which would require a two-thirds majority — and then bar him from again holding public office.

“There is no 'January exception' to impeachment or any other provision of the constitution,” they wrote. “Presidents do not get a free pass to commit high crimes and misdemeanours near the end of their term.”

The Democratic-led House impeached Trump on January 13 on a single charge of inciting insurrection with his speech to supporters before the attack. He is the first US president to be impeached twice and the first to face trial after leaving office.

“It would be perverse to suggest that our shared commitment to free speech requires the Senate to ignore the obvious: that president Trump is singularly responsible for the violence and destruction that unfolded in our seat of government on January 6,” the Democrats wrote.

Trump's defence team argued that not only does the Senate lack the authority to put Trump on trial but that the chamber also has no jurisdiction to prevent him from holding office again.

The constitution states that conviction can lead to “removal from office, and disqualification to hold and enjoy any office of honour, trust or profit under the US”.

“The 45th President of the US performed admirably in his role as president, at all times doing what he thought was in the best interests of the American people,” Trump's defence team said.

During his January 6 speech, Trump repeated false claims that the election was fraudulent and exhorted supporters to march on the Capitol, telling them to “stop the steal”, “show strength” and “fight like hell”. The rampage interrupted the formal congressional certification of Democratic President Joe Biden's victory, sent legislators  into hiding for their own safety and left five people dead including a police officer.

“President Trump's conduct offends everything that the constitution stands for,” the House legislators, known as impeachment managers, wrote in their 80-page brief.

“He summoned a mob to Washington, exhorted them into a frenzy, and aimed them like a loaded cannon down Pennsylvania Avenue. As the Capitol was overrun, President Trump was reportedly 'delighted'," they said.

To secure a conviction, 17 Republicans would need to join the Senate's 50 Democrats in the vote, a daunting hurdle.

Trump's first impeachment trial, on charges of abuse of power and obstructing Congress arising from his request that Ukraine investigate Biden and his son Hunter, ended last year in acquittal by the then-Republican-led Senate.

Trump's brief was filed by his new lawyers just days after he parted ways with his initial legal team amid a reported dispute over how to respond to the charge.

His legal team defended Trump's claims that the election was stolen from him with widespread voting fraud and irregularities — claims repeatedly rejected by US courts.

The Democratic brief made no mention of any witnesses the managers planned to call during the trial. It did cite a phone call Trump placed to Georgia secretary of state Brad Raffensperger urging him to “find” just enough votes to undo Biden's victory in that state.

Trump's lawyers denied that his use of the word “find” was inappropriate.

The reasons for impeachment rest on dubious grounds, with Democrats seeking only to ensure he will not contest another election
Opinion
2 months ago

Donald Trump was right about the wrong aspect of a trade war, and Australia will take it

China trying to punish Australia with commodity import bans has backfired, proving the country that launches a trade war tends to be the loser
Opinion
2 months ago
Next Article