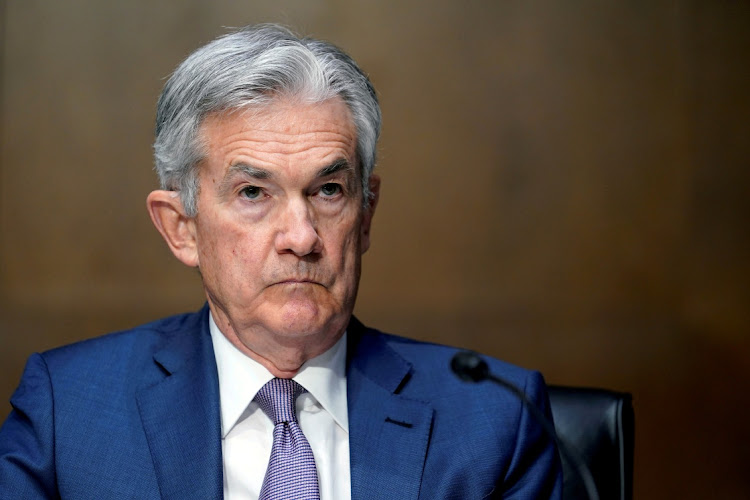 Washington — Federal Reserve chair Jerome Powell made clear the US central bank was nowhere near exiting huge support for the economy during the ongoing coronavirus pandemic, as officials left their benchmark interest rate unchanged near zero and flagged a moderating US recovery.

The central bank’s policymaking body repeated it would maintain its bond-buying programme at the current pace of $120bn of purchases per month until “substantial further progress” towards its employment and inflation goals has been made. It made no changes to the composition of purchases.

Powell told a press conference on Wednesday after a meeting of the federal open market committee (FOMC) that it would take “some time” to achieve the threshold for altering asset purchases, making clear the central bank was not close to lowering them.

“The whole focus on exit is premature,” he said, noting that the US was a long way from a full recovery and the Fed would take care to communicate clearly — to make sure no-one was taken by surprise of what he promised would be a gradual taper of purchases when the time came.

He did also say that the widespread availability of vaccines were grounds for optimism, noting “several developments point to an improved outlook for later this year.” Powell said he had received the first shot of the vaccine himself and expected to get the second shot soon.

Yields on 10-year Treasuries hovered just above 1%, while the dollar held its advance and the S&P 500 extended losses on the day as Powell spoke.

While stocks declined on Wednesday, Powell was asked multiple questions about soaring prices in recent months, but declined to comment directly on spikes in the company GameStop Corp. in particular.

“The pace of the recovery in economic activity and employment has moderated in recent months, with weakness concentrated in the sectors most adversely affected by the pandemic,” the FOMC said in its statement. The revised language followed reports showing US employment fell in December for the first time since April, and retail sales tumbled for a third straight month, amid resurgent coronavirus outbreaks across the country.

The central bank also added a mention of vaccinations to its statement, saying the economy’s path will depend significantly not just on the coronavirus itself but also on progress with inoculations. The rollout got off to a rocky start.

“The path of the economy will depend significantly on the course of the virus, including progress on vaccinations,” the statement said. “The ongoing public health crisis continues to weigh on economic activity, employment, and inflation, and poses considerable risks to the economic outlook.”

That drops a time reference to risks to the outlook “over the medium term” that appeared in their December statement.

The committee unanimously voted to keep the federal funds target rate in a range of zero to 0.25%, where it’s been since March. In a separate move, the Fed reaffirmed its statement on longer-run goals updated in August, while making no changes.

As well as the annual rotation among regional Fed presidents who vote on the FOMC, its ranks were joined by Christopher Waller, who was sworn in as a governor on Dec. 18.

The committee’s decision marked the conclusion of the Fed’s first policy meeting since Democrats took control of the Senate in early January — a development which was widely seen as brightening the outlook for the economy in 2021 by boosting the odds of additional fiscal stimulus.

That sunnier outlook had sent US stocks to record levels and yields on 10-year US. Treasury notes above 1% for the first time since March, helped along by President Joe Biden’s proposed $1.9 trillion relief package.

The all share fell for a second day, with Naspers down due to a weaker close by Tencent in Hong Kong
Markets
2 months ago

Gold dips as markets wait for direction from the Federal Reserve

JSE slips as markets await decision by US Federal Reserve