A US inauguration informed by fear not festivity

‘There’s nothing to celebrate, because we’re in a civil war,’ says one voter, while others think fixing the deep US divide is likely impossible 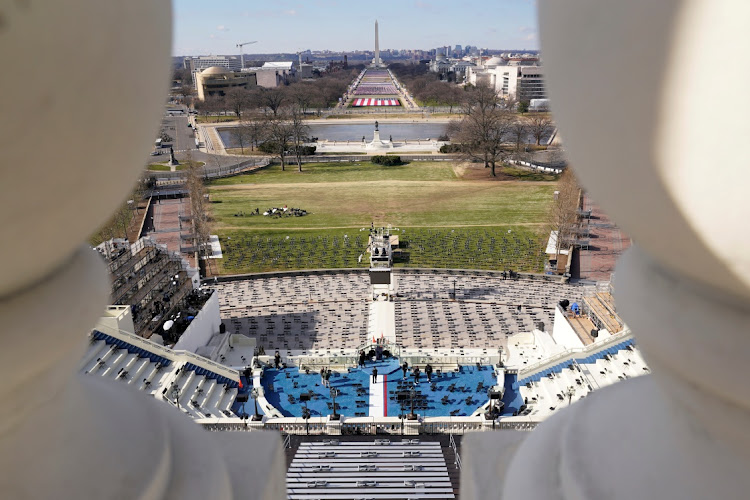 A view of the stage ahead of the 59th presidential inauguration on Capitol Hill in Washington, DC, US, January 19 2021. Picture: POOL VIA REUTERS/SUSAN WALSH

New York — Marge Hobley has waited four years for the day she could finally celebrate the end of Donald Trump’s chaotic presidency. But after the events of recent months — the coronavirus pandemic, Trump’s false attacks on the election results, and the shocking assault on the US Capitol — the  Indianapolis Democrat said any jubilation has yielded to a more muted mix of relief, sadness and cautious optimism.

“The idea of, let’s have a Champagne toast — we’ll have a Maalox or Pepto Bismol toast, maybe,” she said when asked how she would mark Joe Biden’s inauguration on Wednesday. “I think it’ll be tempered by reflection and, if I may, prayer for Biden.”

In interviews, Biden supporters around the country said the dizzying events of the past few weeks, a fitting capstone to a tumultuous Trump presidency, have cast a sombre air over the proceedings — heightened by the deaths of 400,000 Americans in the Covid-19 pandemic.

Some Biden voters said their feelings about inauguration day mirror their emotions in November, when their enthusiasm about the Democrat’s victory was tempered by Trump’s enduring support among so many American voters.

Bob Hoyt, a financial adviser from California, who considers himself an independent voter but has leant Democratic in recent years, said he was “dumbfounded” that Trump got nearly 75-million votes. The Capitol siege on January 6 reinforced his concerns about the future of American democracy.

“There’s nothing to celebrate, because we’re in a civil war,” Hoyt said. “It’s a cold civil war, but we're deluding ourselves if we think we can get the yolk back into the egg after we crack it.”

Rob King, a high school US history teacher in California, said the optimism he felt when he attended Barack Obama’s 2009 inauguration has given way to a sense of foreboding that the country’s divisions run too deep to close.

“I feel like it’s a tourniquet — we’re stopping the bleeding, and just wondering what’s going to happen next,” King said of Wednesday’s swearing-in. “I guess I am looking for some hope.”

A US presidential inauguration is typically a joyous event full of pomp and circumstance, with hundreds of thousands gathering on the National Mall in Washington to hear the incoming president lay out their vision for the country.

This year, however, the Mall will be shut down to visitors, and only a small number of attendees will be permitted to watch Biden take the oath of office and deliver his first speech as president.

The measures reflect restrictions to curb the spread of the coronavirus and heightened security after a mob of Trump supporters breached the Capitol two weeks ago, sending lawmakers into hiding and leaving five people dead, including a police officer.

Tens of thousands of National Guard troops have been deployed in the US capital after law enforcement warned some extremist Trump backers were calling for more violence.

Christopher London, a Washington resident who works in the financial sector and lives not far from the US Capitol, said he would watch the event “hunkered down” with his family. His wife and small children moved to a safer location as the riot unfolded on January 6, and the family has since outlined an evacuation plan should violence break out again.

“It’s like a drowning man who’s able to, like, grab hold of the side of a cliff and able to breathe for a moment,” London said of the inauguration and the end of the Trump era. “As a country, we need a win. As a family, we need a win.”

Some Biden backers nixed plans to travel to Washington to attend the ceremony after the assault on the US Capitol.

Lauren Behling and several friends planned to travel from Minnesota to witness a momentous occasion: the swearing in of the first female US vice-president, Kamala Harris. They canceled their flights five days after the Capitol attack due to the reports that further violence was possible.

“We were very disappointed,” said Behling, who worked for a Democrat Senate campaign in 2020. “We wanted to go and be part of history.”

Shelbie Wassel, a lifelong Democrat who lives in a Baltimore suburb, said the Capitol siege had her worried for Biden and Harris’s safety. “I guess before all this, I was feeling the joy and excitement of finally getting them in and feeling like they were going to turn a corner on so many things,” said Wassel, who works as a personal chef. Now, she said, “I’m just fearful ... Once again, Trump won, because he polluted what should have been an amazing moment.”

Even Biden voters who despaired at the Capitol riot say they remain hopeful Biden can take some small steps towards reconciliation.

“Joe Biden has the opportunity to go down as one of the greatest presidents in history if, indeed, he can bring us back together,” said Scott Richardson, a former Trump voter and restaurant owner in Pennsylvania who backed Biden and spoke at the Democratic National Convention.

Richardson paused for a moment, before adding, “That is a task that is darn near impossible.”

The Treasury nominee says with rates at historic lows, ‘the smartest thing we can do is act big’ in support of Joe Biden's $1.9-trillion stimulus ...
World
10 months ago

Trump stumbles out of the White House leaving a divided US