Power cuts planned this week due to threat of high winds could affect more than 800,000 people 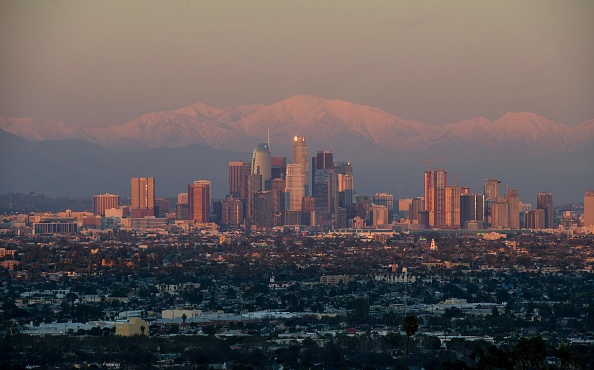 This photo shows a view of the downtown Los Angeles skyline with the snow-covered San Gabriel Mountains in the background as the sun sets on February 7 2019. Picture: GETTY IMAGES/AFP/CHRIS DELMAS

San Francisco/Boston — In an unprecedented move, California utilities are warning they may need to cut power to more than 280,000 homes and businesses to prevent live wires from sparking wildfires as high winds are set to sweep through the drought-weary state.

PG&E said that it notified 6,100 customers living in the southern part of the state’s Central Valley and Sierra Nevada foothills about a possible shut-off, down from an earlier estimate of about 21,000.

These power cuts are extremely rare in the winter and the utilities have never warned of a possible shut-off of this size in January. The blackouts planned this week could affect more than 800,000 people, based on the average size of the state’s households.

The unusual prospect of January shutoffs underscores how wild California’s weather has become as climate change brings about increasingly extreme warmth and drought. Last year, record temperatures took down large swathes of the state’s power grid and wildfires torched more hectares than before.

During a regular winter, public safety power shutoffs “would not be under consideration, but this winter has been anything but normal”, PG&E meteorologists said on the utility’s website. Only 22% of the average rainfall this winter has fallen in the southern Sierra, they said.

High winds, with low humidity that has dried brush and grasses making them easier to burn, will create critical conditions on Monday and Tuesday, the US Storm Prediction Center said in a forecast. There’s a less severe elevated risk for Sunday.

“Recent fuel sampling indicates that the vegetation is still unseasonably dry and ripe for larger wildfires during windy periods,” Edison’s spokesperson Reggie Kumar said. “The last two months of 2020 were part of the worst fire season that California has seen, with near-record levels of dryness in November and December.”

While the winter months usually mark California’s rainy season, much of the state remains gripped by drought conditions, according to the US Drought Monitor.

In 2020, temperatures globally were an average of 1.25°C higher than in pre-industrial times
World
1 year ago
Next Article