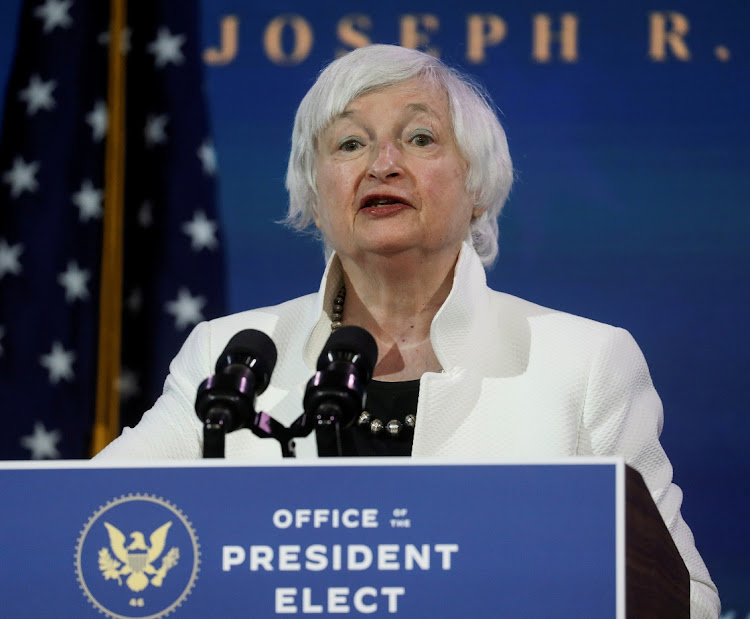 Janet Yellen speaks after US president-elect Joe Biden announced nominees and appointees to serve on his economic policy team, in Wilmington, Delaware, the US, December 1 2020. Picture: REUTERS/LEAH MILLIS

Washington —  Treasury Secretary nominee Janet Yellen on Tuesday steps into a new role after more than a quarter-century in government: salesperson for economic policy after years of defending Federal Reserve policy.

The Senate finance committee’s 10am hearing on Tuesday is likely to feature topics from foreign-exchange policy to taxes, but it will also serve as the first congressional forum where legislators will vet president-elect Joe Biden’s $1.9-trillion Covid-19 relief plan. Yellen will tell them that low borrowing costs mean it’s time to “act big”, according to her prepared remarks.

Yellen, 74, will need to sell a package that includes a minimum-wage hike and substantial expansion in family and medical leave — social safety-net programmes that have already triggered Republican opposition. Democratic legislators, who will soon enjoy majority control of the chamber, are set to press for their own priorities.

For Yellen, a former economics professor who’ll become the first woman to run the Treasury if confirmed, it’s a marked difference from previous service as Fed chair and vice-chair, and running the Federal Reserve Bank of San Francisco. She also headed former president Bill Clinton’s council of economic advisers, which she ran more as an economic think-tank for the administration rather than a group that set policy.

This time she comes to Congress as a political appointee in an environment charged by the possible impeachment trial of Donald Trump and the repercussions of this month’s violence at the Capitol.

“We don’t know what kind of salesperson she’s going to be in a political context — she’s never had to do that before,” said Tony Fratto, who worked at the Treasury and White House during the George Bush administration. She will need to “figure out the best way to win support for the administration’s policies”, he said.

The stakes of getting stimulus through Congress, where Democrats have control with the vice-president’s tiebreaker in a 50-50 partisan split, are high. There are still nearly 11-million unemployed Americans in an economy that continues to be battered by the pandemic. Declines in payrolls and retail sales in December left the nation limping into the new year. More than 17-million people say they have little to no confidence in their ability to pay rent in February.

Yellen, who’s due to participate virtually in the hearing, will tell the committee that the US economy has been suffering from entrenched inequality — and that the administration’s longer-term goal will be to create “more prosperity for more people”.

“Well before Covid-19 infected a single American, we were living in a K-shaped economy, one where wealth built on wealth while working families fell further and further behind,” Yellen will say, according to a text of her prepared remarks. “This is especially true for people of colour.”

Here are some of the other key issues she can be expected to address:

Deficit Financing: Yellen will echo the case made by Biden that cheap borrowing costs are an opportunity for public spending to boost the economy. “Right now, with interest rates at historic lows, the smartest thing we can do is act big,” she’ll say, according to the prepared text. But Yellen will likely get asked what the safe limit is, now that debt is on the verge of surpassing 100% of GDP.

Respected by legislators on both sides of the aisle, Yellen may be crucial in making the case for significant additional borrowing, said Julia Coronado, a former Fed economist and president of MacroPolicy Perspectives. “She’ll be there to assuage worries that we’re going in a radical direction.”

Yellen could also be asked about debt-issuance tactics, and whether she agrees with former Treasury Secretary Robert Rubin in seeking to tilt borrowing towards longer-dated securities. That could lock in cheap funding, though many bond dealers have been sceptical about introducing a 50-year or 100-year bond.

Fed Co-ordination: Steven Mnuchin, the outgoing Treasury secretary, phased out five emergency Fed facilities at the end of December, something he said was required by the language in the March 2020 Cares Act that set them up.

Democrats sharply disagreed. Republicans sought to prevent any resurrection of the programs with language inserted in the December pandemic aid bill. It’s unclear whether the Biden administration sees a role for fresh Fed initiatives.

Yellen more broadly may be asked about the Fed’s intention to keep buying large quantities of Treasuries, and whether the central bank is enabling excessive government borrowing.

“She’s going to have to work out a modus vivendi with the Fed that doesn’t look like a conspiracy and is explicable to Congress,” said Adam Posen, president of the Peterson Institute for International Economics.

Currency policy: After years of mixed messages on US currency policy, and occasional outright endorsement of a weaker currency, Yellen is facing some pressure to restore the embrace of a strong dollar. But she’s also in the past highlighted the negatives from a strengthening greenback.

Yellen, in her testimony, will affirm the US’s commitment to market-determined exchange rates and make clear the country doesn’t seek a weaker dollar for competitive advantage, the Wall Street Journal reported on Saturday, citing Biden transition officials. Biden transition spokespeople were unable to confirm the report.

The Treasury also oversees a semi-annual assessment of US trading partners’ foreign-exchange policies, determining whether they are manipulating their currencies. Mnuchin made three such designations — for China from August 2019 to January 2020, and starting mid-December 2020 for Switzerland and Vietnam.

China ties: While the Treasury isn’t directly in charge of trade negotiations, the department is typically involved, and the secretary in the past has been the leading economic official in engagement forums with China. It remains unclear whether the Biden administration plans to resurrect some type of regular dialogue and what Yellen’s role in any framework might be.

Regulation, Taxes: The Treasury secretary also usually has a prominent role in setting financial regulatory and tax policy, though many other officials are involved and can take the lead. Biden’s administration is expected to strengthen scrutiny of financial institutions and he has pledged to roll back many of Trump’s tax cuts.

Yellen will also head the financial stability oversight council, a cross-agency panel designed to monitor risks. She could face questions on strengthening its powers or oversight, and on whether climate change could be a new area of supervision.