Can Donald Trump be impeached after leaving office?

In a nutshell, yes and no; it depends on which constitutional article, section and historical precedent you decide on 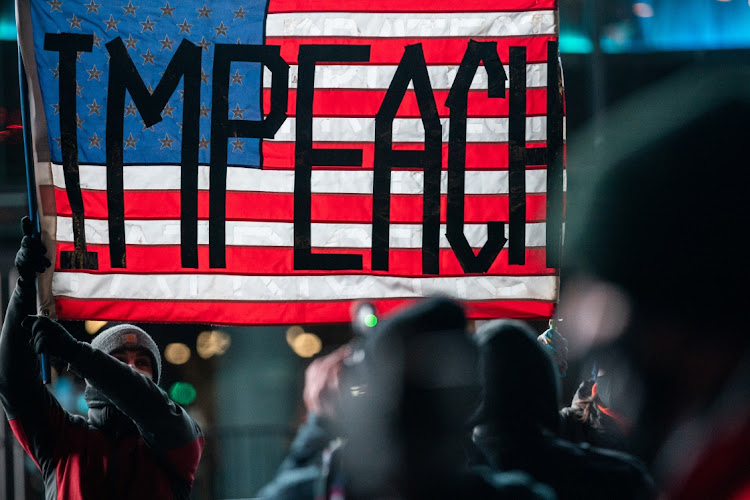 People at a defend democracy rally in New York, the US, on January 7 202l. Picture: REUTERS/JEENAH MOON

Washington — Donald Trump’s second impeachment trial will be the first to extend beyond a president’s time in office, creating a novel legal question that ultimately could require US supreme court resolution.

The answer isn’t settled but history has bad news for Trump: a sparse but consistent line of lower-level impeachments in the past suggests the Senate retains power to put him on trial even after his term ends. If it convicts him, the Senate could take a second vote to bar him from running for office again.

A number of legal scholars say the framers of the constitution didn’t intend to leave presidents free in the waning days of their terms to engage in egregious wrongdoing without consequence.

“Drafting history, impeachment practice, and basic constitutional design all point clearly in favour of the constitutionality of trying a former president,” said Kate Shaw, a constitutional law professor at Cardozo School of Law.

The constitution doesn’t explicitly say whether a Senate trial can take place after a president leaves office. Article 2, section 4 says the president and other officers “shall be removed from office” if convicted. Article 1, section 3 says the Senate’s remedies are limited to removal and disqualification from holding office in the future.

But the context in which the constitution was written provides some clues. The 1787 Constitutional Convention took place as the British parliament was in the process of impeaching and trying William Hastings, the former governor-general of India.

The practice since then suggests a broad understanding that the Senate retains jurisdiction, according Brian Kalt, a professor at Michigan state University College of Law and author of a 2001 law review article about late impeachments.

“In multiple cases, the House and Senate have proceeded as though they can impeach and try people who have already left office, and in one case the Senate took a specific vote to that effect,” Kalt said.

Congress invoked the impeachment power for the first time in 1797, when the House impeached senator William Blount for conspiring to let the British take control of the Spanish-controlled territories of Florida and Louisiana. The Senate held a trial even though it had already expelled Blount. Senators eventually acquitted him on the separate grounds that he wasn’t an “officer” subject to the impeachment clause.

In 1876, the Senate voted 37-29 that it had authority to try former secretary of war William Belknap, even though he had resigned just as the House was poised to impeach him for accepting kickbacks. The Senate eventually acquitted Belknap.

In several instances since then, including the 2009 case of former US district judge Samuel Kent, lawmakers have said that the official’s resignation did not affect the right of the Senate to hold a trial, Kalt and University of Missouri law professor Frank Bowman wrote this week in the Washington Post.

A prominent, retired federal appeals court judge, J Michael Luttig, argued this week that the Senate can’t try Trump after he leaves office. Luttig wrote in the Washington Post that the purpose behind the impeachment clause was to prevent an official from using a government position to inflict further harm on the nation.

“The very concept of constitutional impeachment presupposes the impeachment, conviction and removal of a president who is, at the time of his impeachment, an incumbent in the office from which he is removed,” Luttig wrote. But he added that history offers “some backing” for the argument that the Senate can hold trial after Trump leaves office.

Luttig, who was a shortlist candidate for the supreme court when Republican George W Bush was president, recently advised vice-president Mike Pence that he lacked authority to change the election outcome during congressional vote-counting session, according to the New York Times.

Gregg Nunziata, a former Republican lawyer for the Senate judiciary committee, tweeted on Wednesday that “some conservatives are being misled by Judge Luttig”.

“The impeachment power includes the power to disqualify for life,” Nunziata said. “If office-holders could simply resign to evade this important punishment, it would render that a nullity.”

Regardless of the merits, it’s not clear the supreme court would even consider a Trump challenge to the Senate’s authority. In 1993, the court said it was a “political question” — and therefore beyond the purview of the courts — when an impeached judge objected to the use of a Senate committee to hear evidence as part of his trial.

Pointing to the constitution’s grant of authority to the Senate to “try” impeachments, the court said the term “lacks sufficient precision to afford any judicially manageable standard of review”.

Trump could counter by pointing to a 1969 decision that let Representative Adam Clayton Powell Jr challenge the House’s refusal to seat him. That fight centred on the constitutional provision that lets the House and Senate judge their members’ “qualifications”.

The supreme court said the political-question doctrine didn’t apply because the case required “no more than an interpretation of the constitution”.