It’s really a numbers game: if Democrats win the two Georgia seats, the new vice-president can break a tie of 50-50 in the divided Senate 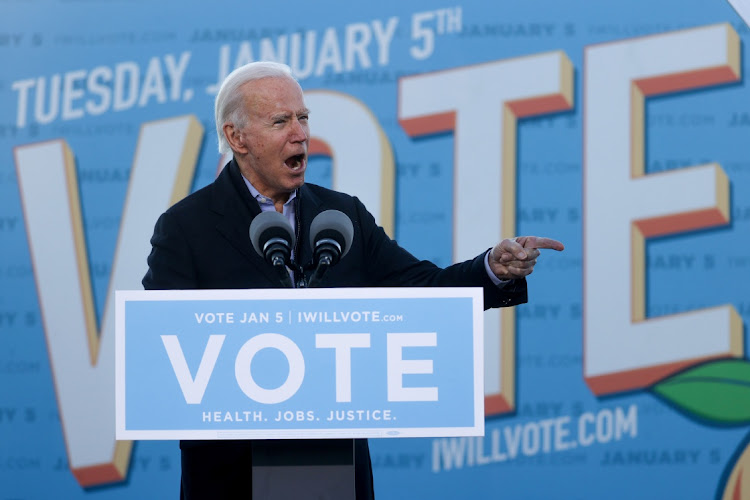 US president-elect Joe Biden campaigns at a rally ahead of runoff elections in Atlanta, Georgia, US, January 4 2021. Picture: REUTERS/JONATHAN ERNST

Washington — The outcome of the Georgia Senate runoff elections will shape Joe Biden’s presidency even before it officially begins on January 20, setting the scope of his agenda and the pace of his nominees’ confirmations — and previewing whether Republicans can launch robust investigations into him and his family.

Biden won the November election with bold pledges to amplify the federal response to the coronavirus pandemic, release billions more in economic stimulus and raise taxes on corporations and people who make more than $400,000 a year. Those and many others will require legislation.

If Democrats Jon Ossoff and Raphael Warnock both win, the Senate will be divided 50-50 between the parties and vice-president-elect Kamala Harris can cast a tiebreaking vote to help advance that agenda. If Republicans David Perdue or Kelly Loeffler win one of the seats, Republicans will have 51 votes — enough to block any Biden initiative, from approving his cabinet onward.

“I don’t think it’s possible to overstate it,” said Casey Dominguez, a political scientist at the University of San Diego. “Who gets the majority leader’s office in the Senate is incredibly important.”

Without those two Senate seats, Biden would be the first CEO to begin his presidency under divided government since George HW Bush in 1989. In the 32 years since, Washington has only got more partisan, and significant factions of the Republican Party have refused to acknowledge Biden’s very legitimacy as president.

Perdue underscored the dramatic stakes when he called in to vice-president Mike Pence’s rally in Georgia on Monday from where he was quarantining after exposure to Covid-19.

“The very future of our republic is on the line,” he said, echoing the sentiments of the other candidates. “This will determine the future of America for a long, long time.” On Monday night, he made a similar appeal on video to a rally in Dalton led by President Donald Trump, who invited Loeffler to address the crowd.

Even if Democrats win that barely-there majority, it may not be enough to result in a blitz of Biden-backed bills, thanks to the Senate filibuster, which requires 60 votes to cut off debate and pass a piece of legislation. But once a year, the Senate can pass a taxing and spending bill with a simple majority vote under a process known as budget reconciliation.

That’s how president Bill Clinton got a welfare overhaul in 1996, how president Barack Obama adopted the Affordable Care Act in 2010, and how President Donald Trump enacted his signature tax cuts in 2017. Biden could pass major stimulus legislation the same way.

Democrats, with a majority, would also face pressure from the left to dismantle the filibuster and deny Republican senators the chance to influence legislation. Biden, a senator from Delaware for 36 years, has supported the filibuster in the past. But he said in 2020 he would be willing to reconsider, depending on how “obstreperous” Republicans are in blocking his agenda.

And the messy, post-election period, with a dozen senators and more than 100 House Republicans challenging Biden’s legitimacy, makes it less likely he will maintain his long-standing position.

That could open the door to even more far-reaching legislation. Some Democrats have advocated increasing the size of the supreme court, giving Biden a chance to fill some lifetime seats. He has proposed an 18-month bipartisan commission to study the issue.

A Republican Senate would mean Biden would have to make good on his campaign promise to find common ground. But a chamber led by Mitch McConnell would likely preclude any action on taxes, immigration or climate — areas where the ideological distance between the parties is greatest.

He might find Republicans willing to work with him on issues such as infrastructure spending and cybersecurity.

Biden will also have individual senators on both sides who might not stick to the party script. Democratic senators Joe Manchin, Jon Tester, Mark Kelly and Kyrsten Sinema all represent Republican-leaning states and may not embrace any progressive legislation, while Republican senators Mitt Romney, Susan Collins and Lisa Murkowski are more likely to compromise.

Some of Biden’s agenda can be achieved unilaterally, but those items tend to be regulatory or foreign policy related, and not the sort of thing that enhances a party’s prospects for success in mid-term elections. Those include his promises to rejoin the World Health Organisation (WHO), the Paris climate accord and the Iran nuclear deal.

He could also re-set the immigration enforcement priorities, dictate federal purchasing policies and reverse Trump’s ban on transgender troops, but those have been lower priorities than the federal response to the pandemic, economic recovery and changes in the tax code.

“Major legislative changes do happen during divided government, even today,” said Dominguez, who specialises in presidential honeymoons. “Big changes in policy almost always have large bipartisan majorities. There are strategic choices that presidents can make to prioritise legislation that has a chance of getting through the Congress.”

Biden would only need 50 Democratic votes — plus Harris — to confirm his selections for cabinet posts and other top jobs, since the filibuster doesn’t apply to cabinet nominations. But a Republican-controlled Senate could still slow the process by delaying votes in committee, leaving Biden without key personnel at the onset of his administration.

The Senate has usually given deference to a new president to fill out his administration as he sees fit, but recent presidents have still run into roadblocks. Every president since Clinton has had to withdraw two or three cabinet nominations because of resistance from Congress.

Biden has denied that the Georgia runoff elections are factoring into his final cabinet decisions, including attorney-general, but a Democratic majority could give him more leeway to select candidates that Republicans might otherwise block.

A Republican-controlled Senate would also give committee chairs to Biden critics, who could initiate investigations of the 2020 election results or the business dealings of the new president’s son Hunter.

“There are all kinds of things that I’d like to hold hearings on,” senator Ron Johnson of Wisconsin said Sunday on NBC’s Meet the Press. He is in line to inherit the role of chair of the permanent sub-committee on investigations if Perdue or Loeffler win the runoff.

“Right now, we have this election,” Johnson said. “We’ve got tens of millions of Americans that think this election was stolen. We need to get the bottom of it.”

The flip side is that a Democrat-led Senate may decide to investigate Trump or his relatives, in a bid to weaken any plans for the family to seek office in 2024. Biden has indicated he wants the country to move on from the Trump era, but emboldened Democrats may forge ahead anyway, especially on their persistent goal to examine Trump’s federal tax returns, or on actions he took in office.

In recent decades, Senate investigations have largely avoided the more partisan topics taken up by the House Oversight Committee. But that spirit of bipartisanship is also fraying.

Biden at his closing Georgia rally, reminded state voters of the stakes in this election, saying, “One state can chart the course not just for the next four years but for a generation.”

Bankruptcy, his hotels empty due to Covid-19, possible tax fraud and sexual assault accusations — these are a few of Donald Trump’s fevered fears
Opinion
10 months ago

Ratifying the results of the US election, usually a formality, falls to the vice-president, and Trump is unlikely to let it be business as usual
Opinion
8 months ago

Trump and Biden to campaign in Georgia ahead of Senate ballot

Trump and Biden to campaign in Georgia ahead of Senate ballot