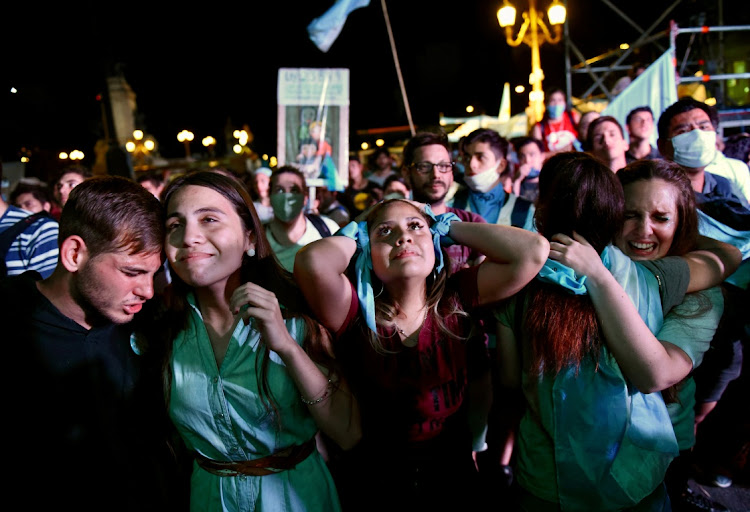 Buenos Aires — Argentina’s senate voted on Wednesday to legalise abortion, a first for a big country in Latin America and a triumph for women’s rights campaigners achieved over the visceral objection of the Catholic Church.

Abortion is extremely rare in a region where the church has held cultural and political sway for centuries. Previously, it was allowed on demand only in Communist Cuba, tiny Uruguay and parts of Mexico.

The fiercely contentious vote was held at 4am after a marathon debate that lasted through the night. In a vote of 38-29 with one abstention, the senate backed the government proposal to allow terminations through the 14th week of pregnancy. The lower house had already approved it this month.

As the result was read out, a crowd of thousands of people who had supported the bill erupted in cheers outside the government building in Buenos Aires, waving the green flags that represented their campaign. Green smoke rose in the dawn light above the crowd.

“This has been a struggle for many years, many women died. Never again will there be a woman killed in a clandestine abortion,” said Vilma Ibarra, the author of the law and legal and technical secretary for the presidency, who wept as she spoke to reporters after the result.

“We did it sisters. We made history. We did it together. There are no words for this moment, it passes through the body and the soul,” tweeted Monica Macha, a legislator with President Alberto Fernandez’s centre-left ruling coalition.

Fernandez himself reacted moments later: “Safe, legal and free abortion is law. Today we are a better society that broadens rights for women and guarantees public health.”

But Pope Francis — himself an Argentinian — reflected the church’s opposition in his own tweet sent on Tuesday before the senate debate: “The son of God was born discarded to tell us that every person discarded is a child of God.”

After the vote, thousands of the bill’s opponents dispersed, wiping away tears as a speaker from a makeshift stage told them: “We are witnessing a defeat of life. But our convictions do not change. We are going to make ourselves heard.”

One of them, Sara de Avellaneda, told Clarin newspaper: “I came because I had to be here. We are not invisible. Not everything is a green tide. This law is unconstitutional and its implementation is not going to be easy.”

The ruling could set the tone for a wider shift in conservative Latin America where there are growing calls for greater reproductive rights for women.

“Adopting a law that legalises abortion in a Catholic country as big as Argentina will energise the struggle to ensure women's rights in Latin America,” said Juan Pappier, a senior Americas researcher at Human Rights Watch.

“Although there will certainly be resistance, I think it’s fair to predict that, as it occurred when Argentina legalised same-sex marriage in 2010, this new law could have a domino effect in the region.”

Until now, Argentine law had allowed abortion only when there was a serious risk to the health of the mother or in cases of rape. Pro-choice groups argued that criminalising abortion harms women from the most vulnerable groups. Argentina’s health ministry says more than 3,000 women died from illegal abortions from 1983-2018.

The Catholic church argues that abortion violates the right to life.