Judge issues a scathing opinion, likening the challenge to Frankenstein’s monster, in one of the highest-profile blows to president’s fight to overturn his election defeat 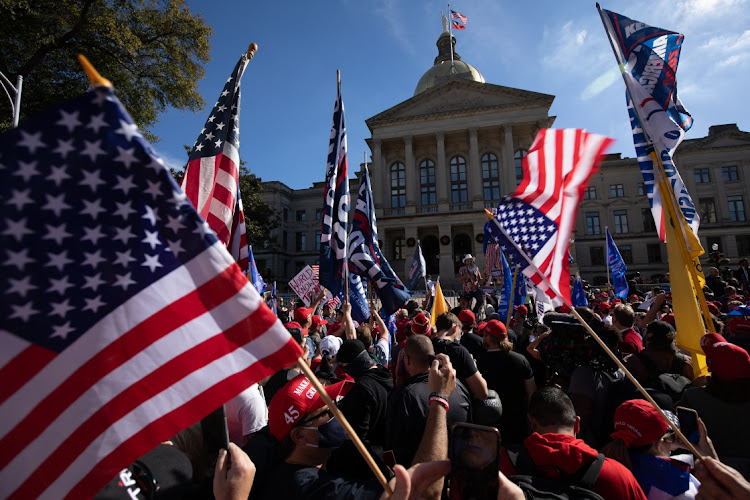 Demonstrators gather during a rally in support of President Donald Trump outside the Georgia state capitol in Atlanta, Georgia, the US, November 21 2020. Picture: DUSTIN CHAMBERS/BLOOMBERG

A federal judge in Pennsylvania threw out a lawsuit by President Donald Trump’s campaign that aimed to block certification of the state’s election results unless it invalidated tens of thousands of mail-in ballots, rejecting the “startling” request due to a lack of evidence.

The state’s motion to dismiss the suit was granted on Saturday by judge Matthew Brann in Williamsport, freeing election officials to certify president-elect Joe Biden’s projected victory as soon as Monday. Major media outlets have declared Biden the winner of Pennsylvania and its 20 electoral votes with a lead of more than 80,000 votes.

“This say, like Frankenstein’s monster, has been haphazardly stitched together,” Brann wrote. The Obama appointee, known as a conservative Republican, said that he “has no authority to take away the right to vote of even a single person, let alone millions of citizens”.

Shortly after the ruling, Pennsylvania Republican senator Pat Toomey said in a lengthy statement that Trump had “exhausted all plausible legal options” in Pennsylvania, and that it was time to concede that Biden had won.

The Trump campaign said in a statement that it would seek an “expedited appeal” to the Third Circuit as a means to ultimately have the Supreme Court, and its 6-3 conservative majority, consider the case.

Trump did not specifically reference Pennsylvania in a tweet late Saturday, but said he hopes “courts and/or legislatures” will take action — a direct reference to efforts to persuade Republican state legislators that they should appoint their own electors in states that Biden won.

The president’s lawyer, Rudy Giuliani, personally argued against the state’s motion to dismiss before Brann on Tuesday, making wild claims of a vast Democratic conspiracy to steal the election. In reaching his conclusion, Brann said the campaign was not “formidably armed with compelling legal arguments and factual proof of rampant corruption” needed to win such a case.

“This court has been presented with strained legal arguments without merit and speculative accusations, unpled in the operative complaint and unsupported by evidence,” the judge wrote. “In the US, this cannot justify the disenfranchisement of a single voter, let alone all the voters of its sixth most populated state.”

It’s the latest and perhaps highest-profile court defeat for Trump since the US election Biden won by 6-million ballots. Suits filed by the campaign and its GOP allies have failed in Michigan, Georgia, Nevada and Arizona as judges declined to toss out millions of votes based on vague assertions by lawyers and sworn affidavits from voters who interpreted perceived irregularities as evidence of a Democratic conspiracy.

Georgia certified its results on Friday, with the Trump campaign asking for a recount on Saturday. Michigan and Pennsylvania are both likely to certify their results on Monday, leaving the president an uncertain path to flip enough electoral votes to reverse his defeat.

Pennsylvania, the largest of the six battleground states, was a particular focus of the Trump campaign’s legal challenges, with suits filed in both state and federal courts.

“These claims were meritless from the start and for an audience of one,” Pennsylvania attorney-general Josh Shapiro said in a statement. “The will of the people will prevail. These baseless lawsuits need to end.”

While Tuesday’s hearing was steeped in conspiratorial rhetoric, Giuliani and other campaign lawyers made even more outlandish accusations at a press conference two days later, describing a scheme involving child voters, dead voters and secretive overseas ballot tabulation directed by George Soros and “communist money” from Venezuela and Cuba.

But the actual claims in the campaign’s lawsuit were always narrower than its public allegations. The suit’s most consistent say was that certain Democratic-led counties had more lenient rules in accepting “defective” ballots or letting voters “cure” such ballots than Republican-led ones, which the campaign claimed violated the constitution’s due process and equal protection guarantees. The state denied those claims and also said the campaign’s proposed remedy of disenfranchising tens of thousands of voters was implausible.

Pressed by Brann  if he was actually alleging voter fraud, Giuliani acknowledged that he was not. The judge said in his decision that while Pennsylvania law doesn’t explicitly allow for election officials to let voters cure their ballot errors, it also doesn’t forbid it, and the state’s highest court declined to clarify the issue.

The campaign has also suggested that hundreds of thousands of ballots in Philadelphia and Pittsburgh should be invalidated because they were allegedly counted without proper oversight by Republican observers, exposing them to potential fraud. Claims tied to such allegations were left out of an amended complaint filed on Sunday but partially reinstated in a second revised complaint filed on Wednesday.

“That plaintiffs are trying to mix-and-match claims to bypass contrary precedent is not lost on the court,” Brann wrote.

Secretary of state Kathy Boockvar, a Democrat, and Pennsylvania county officials argued GOP observers were present while all ballots were canvassed, and that the pre-election “cure” of some ballot deficiencies was allowed under state law.

The second amended complaint also added a proposal that Brann declare the entire Pennsylvania vote “defective” and let the Republican-controlled state legislature decide the election in favour of Trump. Civil rights groups on Friday evening blasted the argument and urged the judge to dismiss the case, saying it was based on an “incoherent conspiracy theory”.

For some Americans, Trump not only won the election he’s the only person and true patriot they trust, with civil war not ‘off the table’
World
9 months ago

Trump critics jump to defence of Chris Krebs, whose agency had pushed back against false claims by Trump administration
World
10 months ago
Next Article