For some Americans, Trump not only won the election he’s the only person and true patriot they trust, with civil war not ‘off the table’ 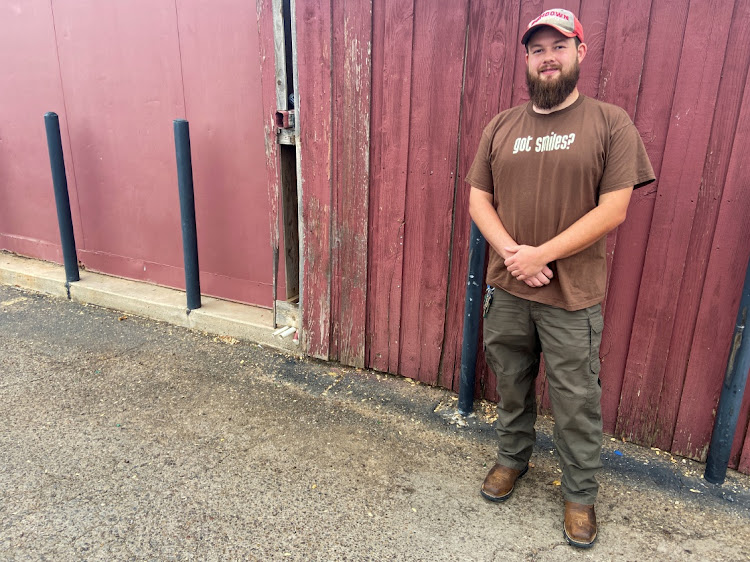 Texas/West Virgina/California — Brett Fryar is like many mainstream Republicans. A 50-year-old chiropractor in Sundown, a west Texas town, he owns a small business. He has two undergraduate degrees and a master’s degree in organic chemistry. He attends Southcrest Baptist Church in nearby Lubbock, where he has previously taught Sunday school and bible studies.

Fryar didn’t much like Donald Trump at first, during the US president’s 2016 campaign. He voted for Texas senator Ted Cruz in the Republican primaries.

Now, Fryar says he would go to war for Trump. He has joined the newly formed South Plains Patriots, a group of a few hundred members that includes a “reactionary” force of about three dozen — including Fryar and his son, Caleb — who conduct firearms training.

Nothing will convince Fryar and many others in Sundown — including the town’s mayor, another Patriots member — that Democrat Joe Biden won the presidential election fairly. They believe Trump’s stream of election-fraud allegations and say they’re preparing for the possibility of a “civil war” with the American political left.

“If President Trump comes out and says: ‘Guys, I have irrefutable proof of fraud, the courts won’t listen, and I’m now calling on Americans to take up arms,’ we would go,” said Fryar, wearing a button-down shirt, pressed slacks and a paisley tie during a recent interview at his office.

The unshakeable trust in Trump in this town of about 1,400 residents reflects a national phenomenon among many Republicans, despite the absence of evidence in a barrage of post-election lawsuits by the president and his allies. About half of Republicans polled by Reuters/Ipsos said Trump “rightfully won” the election but had it stolen from him in systemic fraud favouring Biden, according to a survey conducted between November 13 and 17.

Just 29% of Republicans said Biden rightfully won. Other polls since the election have reported that an even higher proportion — up to 80% — of Republicans trust Trump’s baseless fraud narrative.

Trump’s legal onslaught has so far flopped, with judges quickly dismissing many cases and his lawyers dropping or withdrawing from others. None of the cases contain allegations — much less evidence — that are likely to invalidate enough votes to overturn the election, election experts say.

And yet the election-theft claims are proving politically potent. All but a handful of Republican lawmakers have backed Trump’s fraud claims or stayed silent, effectively freezing the transition of power as the president refuses to concede. Trump has succeeded in sowing further public distrust in the media, which typically calls elections, and undermined citizens’ faith in the state and local election officials who underpin American democracy.

In Reuters interviews with 50 Trump voters, all said they believed the election was rigged or in some way illegitimate. Of those, 20 said they would consider accepting Biden as their president, but only in light of proof that the election was conducted fairly. Most repeated debunked conspiracy theories espoused by Trump, Republican officials and conservative media claiming that millions of votes were dishonestly switched to Biden in key states by biased poll workers and hacked voting machines.

Many voters interviewed said they formed their opinions by watching emergent right-wing media outlets such as Newsmax and One American News Network (OAN) that have amplified Trump’s fraud claims. Some have boycotted Fox News out of anger that the network called Biden the election winner and that some of its news anchors — in contrast to its opinion show stars — have been sceptical of Trump’s fraud allegations.

“I just sent Fox News an e-mail,” Fryar said, telling the network: “You’re the only news I’ve watched for the last six years, but I will not watch you anymore.”

The widespread rejection of the election result among Republicans reflects a new and dangerous dynamic in American politics: the normalisation of false and increasingly extreme conspiracy theories among tens of millions of mainstream voters, according to government scholars, analysts and some lawmakers on both sides of the political divide. The trend has deeply troubling long-term implications for American political and civic institutions, said Paul Light, a veteran political scientist at New York University (NYU).

“This is dystopian,” Light said. “America could fracture.”

Adam Kinzinger, a Republican member of the US House of Representatives, is among the few party members to publicly recognise Biden’s victory. He called his Republican colleagues’ reluctance to reject Trump’s conspiracies a failure of political courage that threatens to undermine American democracy for years. If citizens lose faith in election integrity, that could lead to “really bad things”, including violence and social unrest, he said.

David Gergen — an adviser to four previous US presidents, two Democrats and two Republicans — said Trump is trying to “knee-cap” the Biden administration before it takes power, noting this is the first time a sitting American president has tried to overthrow an election result.

It may not be the last time. Many Republicans see attacks on election integrity as a winning issue for future campaigns — including the next presidential race, according to one Republican operative close to the Trump campaign. The party, the person said, is setting up a push for “far more stringent oversight on voting procedures in 2024”, when the party’s nominee will likely be Trump or his anointed successor.

Other Republicans urged patience and faith in the government. Charlie Black, a veteran Republican strategist, does not believe Republican lawmakers will continue backing Trump’s fraud claims after Biden is inaugurated. They will need White House co-operation on basic government functions, such as appropriations and defence bills, he said.

“People will come to see we still have a functioning government,” Black said, and Republicans will become “resigned to Biden, and see it’s not the end of the world”.

The Biden campaign declined to comment for this story. Boris Epshteyn, a strategic adviser to the Trump campaign, said: “The president and his campaign are confident that when every legal vote is counted, and every illegal vote is not, it will be determined that President Trump has won re-election to a second term.”

Media outlets declared Biden the election winner on November 7. As calls were finalised in battleground states, Biden’s lead in the electoral college that decides the presidency widened to 306 to 232.

Many Republican voters scoff at those results, convinced Trump was cheated. Raymond Fontaine, a hardware store owner in Oakville, Connecticut, said Biden’s vote total — the highest of any presidential candidate in history — makes no sense because the Democrat made relatively few campaign appearances and seemed to be in mental decline. “You are going to tell me 77-million Americans voted for him? There’s just no way,” said Fontaine, 50.

The latest popular vote total for Biden has grown to about 79-million, compared to some 73-million for Trump.

Like many Trump supporters interviewed, Fontaine was deeply suspicious of computerised voting machines. Trump and his allies have alleged, without producing evidence, a grand conspiracy to manipulate votes through the software used in many battleground states.

In Grant County, West Virginia — a mountainous region where more than 88% of voters backed the president — trust in Trump runs deep. Janet Hedrick, co-owner of the Smoke Hole Caverns log cabin resort in the small town of Cabins, said she would never accept Biden as a legitimate president. “There are millions and millions of Trump votes that were just thrown out,” said Hedrick, 70, a retired teacher and librarian. “That computer was throwing them out.”

At the Sunset Restaurant in Moorefield, West Virginia — a diner featuring omelettes, hotcakes and waitresses who remember your order — a mention of the election sparked a spirited discussion at one table. Gene See, a retired highway construction inspector, and Bob Hyson, a semi-retired insurance sales manager, said Trump had been cheated, that Biden had dementia and that Democrats planned all along to quickly replace Biden with his more liberal running mate for vice-president, Kamala Harris.

“I think if they ever get to the bottom of it, they will find massive fraud,” said another of the diners, Larry Kessel, a 67-year-old farmer. Kessel’s wife, Jane, patted him on the arm, trying to calm him, as he grew agitated while railing against anti-Trump media bias.

Rory Wells, 51, a New Jersey lawyer who attended a pro-Trump “stop the steal” election protest in Trenton last week, said he now watches Newsmax because Fox isn’t sufficiently conservative. “I like that I get to hear from Rudy Giuliani and others who are not immediately discounted as being crazy,” he said of Trump’s lead election lawyer.

Ruddy said Newsmax isn’t saying that Biden stole the election — but they’re also not calling him the winner given that Trump has valid legal claims. “The same media that said Biden would win in a landslide now want to not have recounts,” he said.

Charles Herring, president of OAN, said in a statement that his network has seen three weeks of record ratings, as “frustrated Fox News viewers” have tuned in.

Some Trump supporters said they would accept Biden as the winner if that is the final, official result. Janel Henritz, 36, echoed some others in saying that she believed the election included fraud, but perhaps not enough to change the outcome. Henritz, who works alongside her mother Janet Hedrick at their log cabin resort in West Virginia, said she would accept the outcome if Biden remains the winner after recounts and court challenges.

“Then he won fair and square,” she said.

In Sundown, Texas, mayor Jonathan Strickland said there’s “no way in hell” Biden won fairly. The only way he’ll believe it, he said, is if Trump himself says so. “Trump is the only one we’ve been able to trust for the last four years,” said Strickland, an oilfield production engineer. “As far as the civil war goes, I don’t think it’s off the table.”

If it comes to a fight, Caleb Fryar is ready, 6ut the 26-year-old said he hopes Trump’s fraud allegations would instead spark a massive mobilisation of Republican voters in future elections.

Lawyer Rudy Giuliani was at pains to say it wasn’t actually fraud being claimed, but that ‘ballots could have been from Mickey Mouse’
World
8 months ago