As the US experiences a surge of coronavirus infections, hospitalisations jump nearly 50% in two weeks 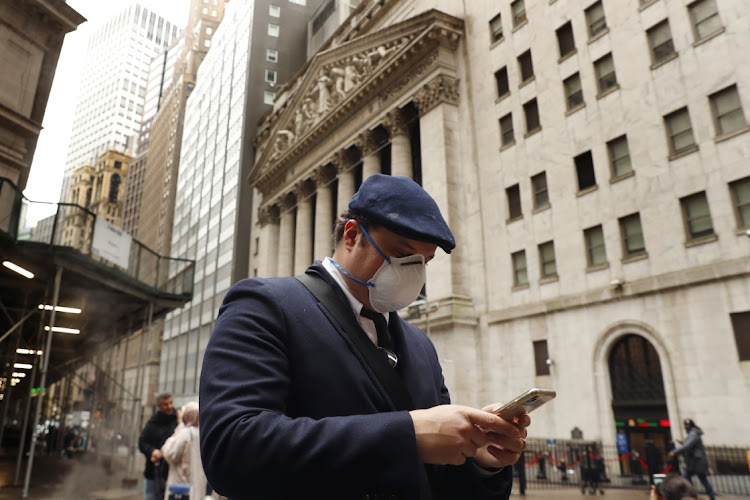 A man wears a protective mask as he walks past the New York Stock Exchang in New York City, the US. Picture: REUTERS/LUCAS JACKSON

Dallas — Dallas Federal Reserve Bank President Robert Kaplan on Thursday warned  the US economy could shrink this quarter as consumers in more states and cities pull back from economic activity amid the record coronavirus case surge.

“It is possible we could have negative growth if this resurgence gets bad enough and mobility falls off enough,” he said, pointing to a drop in activity already visible in places such as  El Paso, Chicago, Utah, Wisconsin, and Colorado.

“The next couple of quarters are going to be very challenging.”

Kaplan had previously said he expected the economy to grow at a 4% to 5% annualised pace. “With this resurgence, the risks are all to the downside,” he said.

As the vaccine is rolled out, economic activity should rebound, especially in the second half of2012, he predicted. The Fed is buying $120bn of bonds each month and should continue doing so, Kaplan said.

“If we needed to, if this got bad enough, we could extend maturities, but I woulnd't increase the size,” he said. In addition, he said, it's “critical” the Fed keeps its emergency lending programmes going into next year. They are scheduled to expire on December 31.

President Donald Trump’s coronavirus task force was set to hold  its first press briefing since April on Thursday amid the surge in infections. The White House said the briefing would take place after a closed-door meeting of the task force earlier in the afternoon.

The number of patients in hospital with Covid-19 in the US has jumped nearly 50% in the past 14 days, straining the nation's health-care system and forcing cities and states to impose new restrictions to curb the alarming viral spread.

Nearly 79,000 people were being in treated for the disease in hospitals across the country on Thursday, a Reuters tally showed, the most at any time during the pandemic.

Meanwhile, Americans were grappling with a spate of new school and business closings aimed at slowing community spread and lowering infection rates.

“The schools have been shut temporarily but only temporarily. They will back be and they'll be safer than ever,” de Blasio told reporters. The long Thanksgiving weekend begins next Thursday.

The mayor also said he expected the state would shut down indoor dining and gyms in his city within “a week or two” given the current rate of infections.

Stringent measures were going into effect across the country this week. The US CDC on Thursday reported 11,465,722 cases of the novel coronavirus, an increase of 165,087 cases from its previous count, and said that the number of deaths had risen by 1,836 to 249,670.

Minnesota, one of several Midwest states dogged by soaring infection rates per capita that threaten to overwhelm health-care systems, ordered a shutdown of restaurants, bars, fitness centres and entertainment venues starting on Friday through at least December 18. More than 90% of hospital intensive care unit (ICU) beds were already occupied in the eastern half of the state.

In nearby Wisconsin, 90.2% of ICU beds were occupied on Thursday, state data showed.

Health and government officials have warned that the dramatic rise in hospitalisations over the last few weeks may get worse and urged Americans to limit their Thanksgiving holiday celebrations to small, single household gatherings.

The US northeast region, which for months had successfully held the virus at bay after the pandemic's crushing first wave in the spring, has seen the highest percentage jump in hospitalisations at 85.4% over the past 14 days, according to Reuters data. During that same period, hospitalisations in the Midwest have increased by 56.8%, in the west by 50.1%, and in the South by 34.4%.

Kansas, where the positive test rate was approaching 60% last week, became the latest state to issue a mask mandate on Wednesday.

The Trump administration has persisted in criticising state efforts to curb the virus by shutting down parts of the economy, while refusing to pass on critical Covid-19 data to president-elect Joe Biden and his transition team, threatening to slow the incoming administration's pandemic response.

The growing tide of infections and public health-recommended shutdowns portends a bleak winter for the American economy.

Initial claims for state unemployment benefits totalled a seasonally adjusted 742,000 for the week ended November 14, compared to 711,000 in the prior week, the labour department said on Thursday

Trump critics jump to defence of Chris Krebs, whose agency had pushed back against false claims by Trump administration
World
4 months ago

Pelosi must still win a majority of votes from the full House to remain speaker when the new Congress begins in January, and she will have a slimmer ...
World
4 months ago

Lawyer Rudy Giuliani was at pains to say it wasn’t actually fraud being claimed, but that ‘ballots could have been from Mickey Mouse’
World
4 months ago
Next Article