Pelosi has work cut out to unite divided Democrats 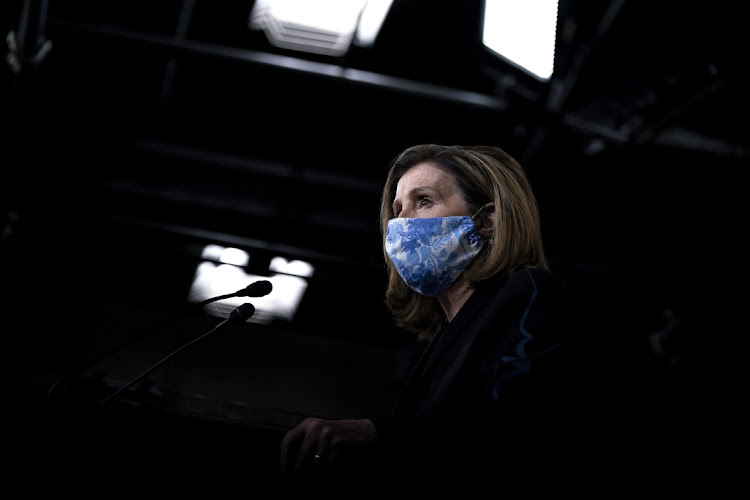 US House Speaker Nancy Pelosi, a Democrat from California, speaks during a news conference in Washington, DC on Friday November 13 2020. Picture: BLOOMBERG/STEFANI REYNOLDS

With the narrowest majority in decades, Pelosi’s ability to build consensus and keep Democrats moving in the same direction will be severely tested by the party’s two competing factions.

After the Democrats lost as many as 10 House seats in the election, the tension spilled out on Twitter, in interviews and on a conference call, pitting representatives from swing districts such as Pennsylvania’s Conor Lamb and Virginia’s Abigail Spanberger against the group of young, vocal progressives led by New York’s Alexandria Ocasio-Cortez.

Pelosi’s first test comes later this week. House Democrats will hold leadership elections that appear to offer a reprise of the existing team at the top, led by Pelosi, 80, majority leader Steny Hoyer, 81, and majority whip James Clyburn, 80. The elections are to be held virtually, with nominating speeches and candidate presentations conducted by video call. Members will use a special phone app to vote, encrypted to keep their choices secret.

Pelosi is asking the caucus to again pick her as the top Democratic leader, and its nominee for speaker. But the official vote for the speaker position occurs on the House floor in January, with members of both parties participating.

Adding to her troubles, Democrats fell short of expectations in the Senate, depriving her of a powerful partner in advancing the party’s legislative goals.

Depending on the outcome of two runoff elections in Georgia, Democrats in the best case scenario would nominally control a 50-50 Senate with more conservative members such as Joe Manchin of West Virginia and Kyrsten Sinema of Arizona putting a check on the more liberal impulses of the House. In the worst case for Democrats, Republicans emerge with a 52-48 advantage.

Pelosi said that despite working with a shrunken majority, the challenges are lessened by having Biden in the White House. “Remember, we’re going to have the opportunity to have bills signed into law,” she said at a news conference on Friday. “Our leverage and our power is greatly enhanced by having a Democratic president.”

Pelosi’s commitment two years ago to step aside as top party leader after 2022 — made to deal with demands for a new generation of leadership — could itself contribute to infighting as members of various factions begin to make side agreements and collect chits to grab footholds for future leadership rungs.

At least two House Democratic centrists have privately solicited feedback from colleagues on backing a challenger to Pelosi as top Democrat and speaker nominee, according to Democratic aides. But so far that has gained little traction and no serious challenger has emerged. One legislator often cited as a potential successor to Pelosi, New York Representative Hakeem Jeffries, 50, has said he is running again for caucus chair.

House Democrats next year will face pressure to use what is likely to end up as a roughly 10-seat majority to expand the government’s role in health care, prop up the virus-damaged economy and invest heavily in infrastructure and combating climate change.

Biden’s and Pelosi’s agendas are closer to those of swing district Democrats than that of the progressive wing. And party voters have already rejected some of the costlier far-left initiatives, such as Medicare for All, or the Green New Deal, by choosing Biden in the primaries.

Yet the faction of young, vocal progressives will be slightly expanded in the next Congress. Several progressives won in safe Democratic districts, including Jamaal Bowman and Mondaire Jones in New York and Cori Bush in Missouri. The progressive movement lined up behind Biden in the election and will be looking to make its mark.

“It’s not really just about pushing him,” Ocasio-Cortez said, referring to Biden. “It’s about being able to make plays in the House and the Senate, and to shape legislation to make it more progressive before it even reaches his desk.”

Other internal differences are more complex than progressives vs moderates or the establishment.

There are self-described “business friendly” groups such as the 104-member New Democrat Coalition, or the fiscally moderate 27-member Blue Dog Coalition, and collectives representing racial diversity, or regional and other interests. Many reflect differing aims on such areas as business and taxes, government spending, regulation, health care, climate, and national security.

“I don’t think conflict in and of itself is bad,” said Representative Pramila Jayapal of Washington State, co-chair of the nearly 100-member Congressional Progressive Caucus. “I think it’s OK for us to disagree and to push and to try to get as far as we possible can, understanding that there are different straits for people in different districts and different states.”

Very quickly after an initial flurry of legislative efforts next year, the focus will be shifting to the 2022 midterm elections. The party in control of the White House historically loses seats in Congress in the midterms and that could be worsened if Democrats overshoot on policy initiatives.

It’s a familiar spot for Pelosi, who helped president Barack Obama pass the 2009 economic stimulus bill and push through the Affordable Care Act only to lose 63 seats — and the House majority — in the next midterm election.

“If midterm election dynamics of the last decade hold, moderate Democrats, for the first time, will face a truly unfavourable electoral environment. Their risk-averse nature will only be amplified by a harder driving progressive wing,” said Josh Huder, a senior fellow at Georgetown University’s Government Affairs Institute.

That is already playing out. Spanberger, who won a close election to defend her Republican-leaning Virginia district, was among the swing-district Democrats who scolded her progressive colleagues for defending socialism and calling for defunding the police — messages she said made it easy for Republicans to caricature.

But Ocasio-Cortez and a coalition of progressive groups have blamed this year’s Democratic losses on outdated campaign techniques and said pulling back from bold ideas will not stop Democratic attacks. They said the party should embrace its enthusiastic base.

“We cannot let Republican narratives drive our party away from Democrats’ core base of support: young, black, brown, and working class people and social movements who are the present and future of the party,” the progressive groups, including Justice Democrats and the Sunrise Movement, said in a post-election analysis.

Biden has far more going for him than Obama had