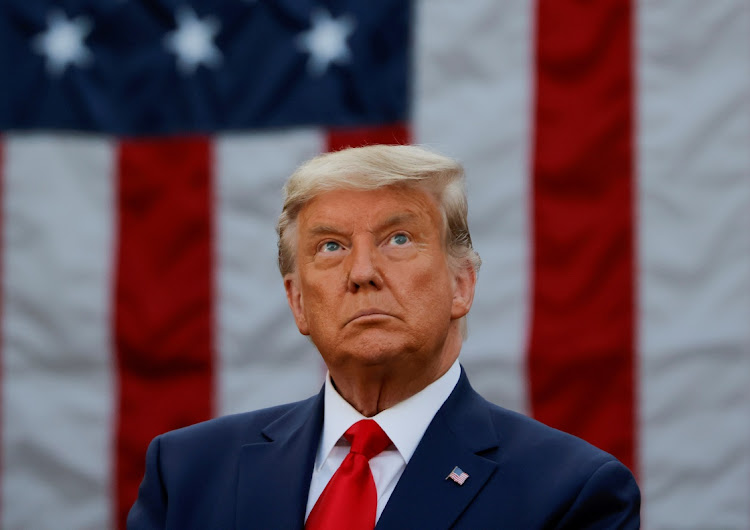 US President Donald Trump pauses during an address in the White House in Washington, the US, November 13 2020. Picture: REUTERS/CARLOS BARRIA

Washington —  President Donald Trump pulled back from a tacit concession to Joe Biden on Sunday, insisting the former vice-president had only won the White House in the eyes of the media, and vowing to keep fighting what he called a “rigged” election.

“He only won in the eyes of the FAKE NEWS MEDIA. I concede NOTHING! We have a long way to go. This was a RIGGED ELECTION!,” he tweeted. The post was flagged by Twitter.

He only won in the eyes of the FAKE NEWS MEDIA. I concede NOTHING! We have a long way to go. This was a RIGGED ELECTION!

Earlier, he had sent a tweet, referring to Biden, that “He won because the Election was Rigged”, in the first suggestion that he accepted that the Democrat will be the next president of the US.

But his campaign adviser Jason Miller insisted Trump was not admitting defeat.

“The president was referring to the mindset of the media. His goal remains to un-rig the election and continue exposing voting irregularities and unconstitutional election management by Democratic officials,” he said.

Asked about the initial tweet, Ron Klain, named this week as Biden’s chief of staff, said a concession from Trump was immaterial.

“If the president’s prepared to begin to recognise that reality, that’s positive. Donald Trump’s Twitter feed doesn’t make Joe Biden president or not president. The American people did that,” Klain said.

Rudy Giuliani, Trump’s personal lawyer, said on Fox News channel that the president was being “sarcastic” in the tweet — an excuse used in the past by Trump to reverse various statements.

But Asa Hutchinson, the Republican governor of Arkansas, took the comment at face value.

“It was good, actually, to see President Trump tweet out that he won,” Hutchinson said. “I think that’s a start of an acknowledgment.” Hutchinson, a former congressman, said he expects Biden to be the next president.

Trump spent Sunday morning at his Virginia golf club, which is where he was last weekend when the Associated Press (AP) and networks called Pennsylvania, and therefore the presidency, for Biden.

On Friday, the AP and networks called the outstanding states, leaving Biden with 306 Electoral College votes to 232 for Trump, well above the 270 needed to secure the White House.

Trump has vowed to fight the results in court, but his legal moves have been largely unsuccessful and do not target enough votes to overturn the result given the size of Biden’s lead in key states.

Biden has been moving forward with forming an administration, but Trump’s refusal to concede has locked up millions of dollars in federal money for the transition and blocked classified intelligence briefings.

On Saturday, thousands of Trump supporters gathered in Washington to rally for the president and were treated to a presidential drive-by. He later tweeted images from the event and fresh complaints about the outcome of the election, some of which were flagged by Twitter.

It’s hard to say just how damaging Trump’s economic agenda has been, but it’s undermined key global relationships and institutions
Opinion
11 months ago