Eta adds to a record-breaking Atlantic hurricane season that’s seen hundreds of deaths, billions of dollars in damage, and a total of 28 storms 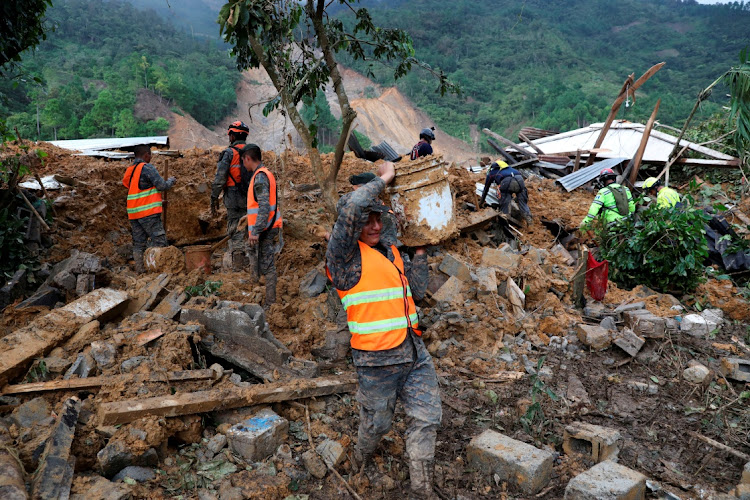 Soldiers remove debris and mud from an area hit by a mudslide, caused by heavy rains brought by Tropical Storm Eta, in the buried village of Queja, Alta Verapaz, Guatemala. Eta is now headed towards Florida, the US, November 7 2020. Picture: EFE/POOL VIA REUTERS/ESTEBAN BILBA

Boston — After coming ashore in the Florida Keys overnight, Tropical Storm Eta is now hovering just north of the Yucatan Channel and is set to strengthen again as it meanders over the south-eastern Gulf of Mexico on Tuesday.

Flash and urban flooding will be possible for the Bahamas and the remainder of southern and eastern Florida over the next few days with south Florida and western Cuba also at risk, according to the National Hurricane Centre (NHC).

“Eta is stationary, and little overall motion is forecast today, with a slow northward motion expected tonight through to Thursday,” the NHC said in an advisory published on Tuesday at 4am EST. “Maximum sustained winds are near 80km/h with higher gusts. Some strengthening is forecast during the next day or two, followed by weakening likely starting on Thursday.”

Neighbourhoods flooded across several parts of South Florida, including Miami’s Brickell Avenue financial district, where several banks and investment firms have their offices.

“The biggest problem with this system is going to be the rainfall,” said Dan Kottlowski, a meteorologist at AccuWeather. “A lot of places are going to have days of pouring rain.”

The official hurricane centre track forecast currently takes Eta on a U-shaped path through the eastern Gulf of Mexico. Its threat to offshore oil and natural gas production will probably be low, Kottlowski said.

Eta adds to a record-breaking Atlantic hurricane season that’s seen hundreds of deaths, billions of dollars in damage, and a total of 28 storms. So many storms have formed that the hurricane centre used up all the names on the official list by mid-September and has had to use Greek letters to designate subsequent systems. Eta is the 12th storm to hit the US this year, an all-time high.

Eta made landfall in Florida at about 11pm local time on Sunday and has since moved westward near the Dry Tortugas, a group of islands at end of the Florida Keys that’s home to a 19th century military fort. Across Florida, more than 9,000 customers are without power, according to PowerOutage.us, a website that tracks blackouts.

The storm has already left a path of destruction through Central America and the Caribbean. Eta previously made landfall in Cuba early on Sunday with 105-km/h winds and heavy rains. The storm killed more than 50 people across Central America last week, and more than 100 others are missing after it struck that region as a major hurricane, according to the Associated Press.

Oddly, because tropical storms spin counter-clockwise, some of the highest wind gusts have been hitting eastern Florida far from Eta’s centre, Kottlowski said. Also, winds at the edge are traveling over water, so there is nothing to slow them down before they hit the eastern coast.

Part of what is keeping Eta at bay through the course of the week is a large dome of high pressure that could generate record high temperatures across much of the eastern US this week, said Jim Rouiller, lead meteorologist at the Energy Weather Group. Temperatures will reach 24ºC on Monday in Chicago and 23ºC in New York, the National Weather Service said.

Eta will likely make landfall again somewhere between Tampa and the Florida Panhandle on the state’s west coast by as late as Saturday. For the US, Eta’s destruction probably won’t match the tragedy still unfolding across Central America. The US economic tally will probably be less than $100m in insured losses, said Chuck Watson, a disaster modeler for Enki Research.

Florida governor Ron DeSantis has declared an emergency in advance of Eta. Beyond Eta, the hurricane centre is tracking two other potential systems, one in the Caribbean with a 50% chance of becoming a storm in five days and the other in the central Atlantic with an 80% chance.

“It’s not over,” Rouiller said. “I think we’re going to have another one. The ocean temperatures are warm enough to be supportive of hurricane growth.”

The move came after the Hong Kong Observatory kept its storm signal at number 8, the third-highest on its scale
World
9 months ago

If the US stays out of the agreement, there will be consequences for American businesses with a global footprint, and even for some without
World
8 months ago
Next Article