Biden’s victory came after the Associated Press, CNN and NBC showed him winning Pennsylvania and gaining more than the 270 Electoral College votes needed to secure the presidency. 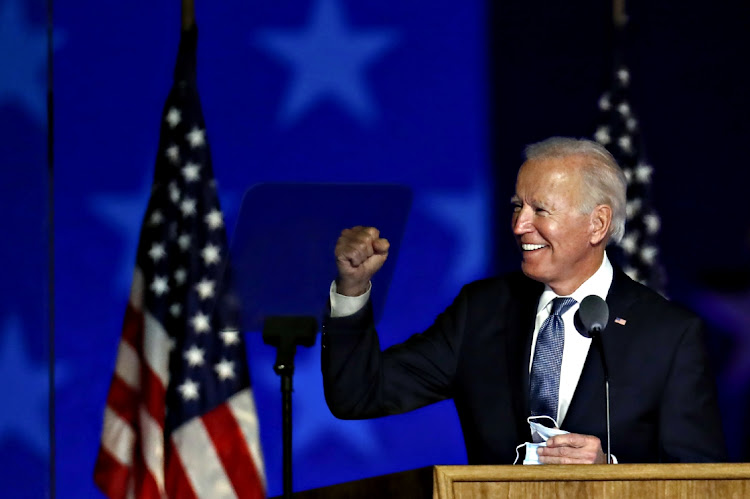 Joseph Robinette Biden Jr has defeated Donald Trump to become the 46th US president, unseating the incumbent with a pledge to unify and mend a nation reeling from a worsening pandemic, faltering economy and deep political divisions.

Biden’s victory came after the Associated Press, CNN and NBC showed him winning Pennsylvania and gaining more than the 270 Electoral College votes needed to secure the presidency. Trump sought to undermine the outcome, baselessly accusing Democrats of trying to steal the election and claiming victory before the race was called.

The president elect said he is honoured that Americans chose him to be their president.

America, I’m honored that you have chosen me to lead our great country.

The work ahead of us will be hard, but I promise you this: I will be a President for all Americans — whether you voted for me or not.

I will keep the faith that you have placed in me. pic.twitter.com/moA9qhmjn8

Biden’s running mate, California Senator Kamala Harris, 56, becomes the first Black and Indian-American woman to serve as vice-president, a glimpse at a coming generational shift in the party.

Biden, 77, will become the oldest president-elect in US history and the first to oust a sitting commander-in-chief after one term since Bill Clinton defeated George H.W. Bush in 1992.

But the incoming president’s goal of uniting the country will be made more difficult by Trump’s unfounded allegations of fraud and with control of the US Senate up in the air, awaiting two run-offs in Georgia in January.

If Republicans hold the Senate, Biden’s agenda of tax hikes on the wealthy and corporations and climate-friendly energy policies could be stymied in Congress. Democrats maintained control of the House of Representatives.

Biden won back the battleground states of Michigan, Wisconsin and Pennsylvania — the so-called Blue Wall that delivered the presidency to Trump in 2016. Buoyed by historic turnout, Biden reaped 4 million more votes than Trump nationwide, as of Saturday morning, winning at least 74 million votes to Trump’s 70 million.

Trump sought to cast doubt on the outcome, claiming widespread voting irregularities without evidence and filing lawsuits to contest the ballot count in some key states where he was behind.

“I WON THIS ELECTION, BY A LOT!” Trump tweeted Saturday morning.

So far, none of Trump’s lawsuits have gained traction or demonstrated that the results of the election can be overturned.

Biden pulled together enough support to sweep aside one of the most unconventional and polarising presidents in US history, a man who cultivated a fierce loyalty among his supporters — they had taken to chanting, “We love you!” at his campaign rallies — while equating his political rivals and the media to enemies of the state.

Given how close Biden’s margins were, Trump might have won a second term if not for his widely criticised response to the coronavirus pandemic and the economic fallout. The president routinely mused at rallies how he had the election won before the virus reached the US earlier this year.

Trump consistently downplayed the threat of the virus and discouraged even the simplest public health measures to curb its spread, turning mask-wearing into a political issue. For voters, seeing Trump, his wife and his youngest son infected with Covid-19 in early October punctuated his failure to protect the nation as a whole.

Biden has promised that combating the US outbreak will be his highest priority, along with repairing a battered economy. He has proposed a $3.5 trillion plan that relies heavily on deficit spending to create jobs, though a plan that size likely would face resistance in a Republican-led Senate. More than 9.7 million Americans have been sickened and more than 236,000 have died since February.

The president-elect has said he can erase some of Trump’s most controversial decisions on his own, without congressional approval. He plans to rejoin the Paris climate agreement and the World Health Organization and reverse Trump’s rollbacks of environmental regulations. He says he will also end the ban on immigration from several predominantly Muslim nations and restore rights for asylum seekers.

Voters responded to Biden’s relative humility and his conventional approach to the campaign, which reflected his 47 years in public life. Biden surrounded himself with many of the same advisers from his past campaigns, and his administration likely would include at least some veterans of Barack Obama’s White House, where Biden was vice-president.

On the airwaves, Americans saw a one-sided contest: In August and September, Biden’s campaign and the Democratic National Committee outraised Trump’s team by more than $289 million, fuelling a huge advertising effort.

Facing a likely Republican majority in the Senate, Biden would have to draw on long-standing relationships with top Republicans in Congress to have any shot of passing major legislation or getting his preferred cabinet confirmed. That could prove difficult in a Washington that looks little like it did when Biden first entered politics in 1972.

The presidency marks an unexpected capstone for Biden’s five-decade political career. The former Delaware senator’s two previous presidential bids in 1988 and 2008 collapsed in the primaries. After serving as Obama’s vice-president, he passed up a chance to run again in 2016 following the death of his son Beau Biden and as Democrats coalesced around Hillary Clinton.

Biden entered the Democratic primary in April 2019 as the front-runner. He ran on a message of unity, often saying he ran because of Trump’s response to the 2017 White supremacist rally and counter-protest in Charlottesville, Virginia, when the president said there were “very fine people on both sides.”

Until Biden’s victory was assured, Democrats feared he might fall short — much like Clinton in 2016. Public polls once again appeared to overstate Biden’s strength in closely contested states, as Biden was forced to eke out narrow wins in battlegrounds like Pennsylvania and Wisconsin.

Party operatives fretted about Biden’s light travel schedule during the campaign’s final stretch. Some aides feared Biden’s operation did not excite Black and Latino voters enough to get them to the polls.

Harris to Be Key Adviser

Biden’s choice of Harris seemed designed to counter the criticism that he was a throwback candidate in a party pointed towards the future. A California senator and that state’s former attorney-general, Harris drew younger and minority voters to the campaign. Biden promised her that she would have the same access to the Oval Office that he did as vice-president, and would be the last one to offer advice after a meeting.

Harris challenged Biden in the primaries after gaining national fame through her questioning of Supreme Court Justice Brett Kavanaugh and attorney-general William Barr at their confirmation hearings. If Biden, who will turn 82 in 2024, decides not to seek a second term, she is almost certain to run again.

Ultimately, it was the coronavirus that sunk Trump’s chance of a second term. Even after recovering from his bout with the virus, Trump attacked leading infectious disease experts, such as Anthony Fauci, a member of his own coronavirus task force. Polls routinely showed that voters rated Trump’s pandemic response poorly.

While Trump held a series of rallies packed with unmasked supporters, Biden urged Americans to heed the warnings of scientists and medical experts to maintain social distancing and wear face coverings in public.

After cancelling all in-person campaign events as the coronavirus swept across the US in March, Biden later resumed travel after Labor Day and made a point of wearing a mask in public. His events were small and socially distant, and he held drive-in rallies of hundreds of people honking their support.

Biden made the race into a referendum on Trump, and the president tried to caricature Biden as a corrupt, past-his-prime politician who was too weak to hold off the far left-wing of his party. The president coined a derisive nickname for Biden — “Sleepy Joe” — just like his “Crooked Hillary” moniker in 2016.

Trump was better able to define Clinton, whose campaign was overshadowed by controversy over her handling of her e-mails while Secretary of State. A late October letter from then-FBI Director James Comey may have cemented Trump’s win.

But attempts by Trump’s associates to smear Biden as corrupt fell flat. A week before the election, 55% of voters surveyed in a CNN poll said they viewed the former vice-president favourably.

Still, many of the same challenges that sunk Trump’s presidency — namely a resurgent pandemic that is slowing the US economic recovery — could overwhelm the rest of Biden’s agenda.

He will be confronted with a cascading set of crises even beyond the pandemic: racial unrest, accelerating climate change and a possible Supreme Court ruling that could gut Obamacare, a policy he has promised to build on.

Biden likely will have to continue to contend with Trump, who is showing no sign of going quietly from the White House.

The US faces a tough battle ahead that demands science, medicine and truth
Opinion
10 months ago
Next Article