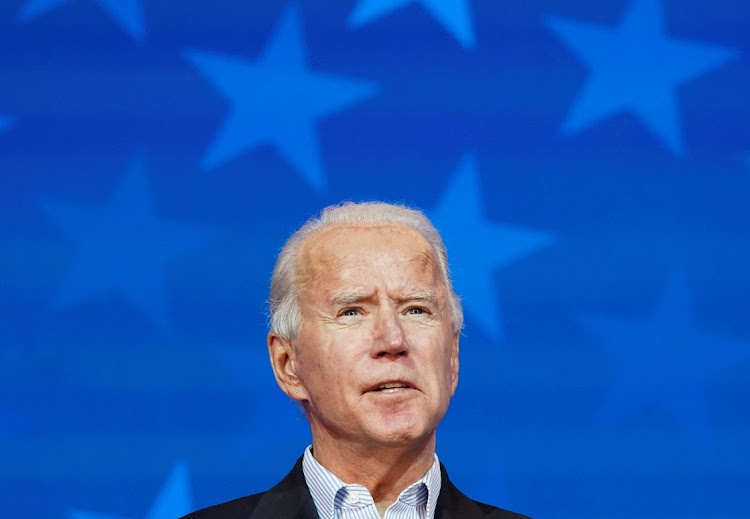 Joe Biden makes a statement on the 2020 US prsidential election results during a brief appearance before reporters in Wilmington, Delaware on November 5 2020. Picture: REUTERS/Kevin Lamarque

Washington — Democratic presidential candidate Joe Biden took a narrow lead over President Donald Trump in the battleground states of Georgia and Pennsylvania on Friday, edging closer to winning the White House in a nail-biting contest as a handful of undecided states continue to count votes.

In Pennsylvania, Biden moved ahead of Trump by 5,500 votes on Friday morning, while in Georgia, he had opened up a 1,097-vote lead.

Biden would become the next president by winning Pennsylvania, or by winning two out of the trio of Georgia, Nevada and Arizona. Trump’s likeliest path appears narrower — he needs to hang on to both Pennsylvania and Georgia and also to overtake Biden in either Nevada or Arizona.

Biden moved ahead of Trump by 1,097 votes in Georgia, where counting continued early on Friday.

The shift in Georgia came hours after Trump appeared at the White House to falsely claim the election was being “stolen” from him. His campaign is pursuing a series of lawsuits across battleground states that legal experts described as unlikely to succeed in altering the election outcome.

Trump’s lead had steadily diminished in Georgia, a Southern state that has not voted for a Democratic presidential nominee since Bill Clinton took the White House in 1992, as officials worked through tens of thousands of uncounted votes, many from Democratic strongholds such as Atlanta.

The Georgia secretary of state reported late on Thursday there were about 14,000 ballots still to count in the state.

The state also will have to sift through votes from military personnel and overseas residents as well as provisional ballots cast on election day by voters who had problems with their registration or identification.

Biden has been steadily chipping away at the Republican incumbent’s lead in Pennsylvania as well. His deficit there had been as high as 678,000 votes early on Wednesday.

Biden also maintained slim advantages in Arizona and Nevada. In Arizona, his lead narrowed to about 47,000 votes, and in Nevada he was ahead by about 11,500.

As the country held its breath for a result in the White House race, Georgia and Pennsylvania officials expressed optimism they would finish counting on Friday, while Arizona and Nevada were still expected to take days to complete their vote totals.

Trump has sought to portray as fraudulent the slow counting of mail-in ballots, which surged in popularity due to fears of exposure to the coronavirus through in-person voting. As counts from those ballots have been tallied, they have eroded the initial strong leads the president had in states such as Georgia and Pennsylvania.

States have historically taken time after election day to tally all votes.

The close election has underscored the nation’s deep political divides and, if he wins, Biden will likely face a difficult task governing in a deeply polarised Washington.

Republicans could keep control of the US Senate pending the outcome of four undecided Senate races, including two in Georgia, and they would likely block large parts of his legislative agenda, including expanding healthcare and fighting climate change.

The winner will have to tackle a pandemic that has killed more than 234,000 people in the US and left millions more out of work, even as the country grapples with the aftermath of months of unrest over race relations and police brutality.

Trump fired off several tweets in the early morning hours on Friday, and repeated some of the complaints he aired earlier at the White House. “I easily WIN the Presidency of the US with LEGAL VOTES CAST,” he said on Twitter, without offering any evidence that any illegal votes have been cast.

Twitter flagged the post as possibly misleading, something it has done to numerous posts by Trump since election day.

In an extraordinary assault on the democratic process, Trump appeared in the White House briefing room on Thursday evening and baselessly alleged the election was being “stolen” from him.

Offering no evidence, Trump lambasted election workers and sharply criticised polling before the election that he said was designed to suppress the vote because it favoured Biden.

“They’re trying to rig an election, and we can’t let that happen,” said Trump, who spoke in the White House briefing room but took no questions. Several TV networks cut away during his remarks, with anchors saying they needed to correct his statements.

Biden, who earlier in the day urged patience as votes were counted, responded on Twitter: “No-one is going to take our democracy away from us. Not now, not ever.”

Trump supporters, some carrying guns, ramped up their demonstrations against the process on Thursday night. In Arizona, Trump and Biden supporters briefly scuffled outside the Maricopa County elections department in Phoenix.

In Philadelphia, police said they arrested one man and seized a weapon as part of an investigation into a purported plot to attack the city’s Pennsylvania Convention Centre, where votes were being counted.

President Donald Trump moved to withdraw from the accord exactly one year ago, abandoning a global effort to curb carbon emissions and slow global ...
World
11 months ago
Next Article

A Joe Biden win is likely to mean legislative gridlock

A Joe Biden win is likely to mean legislative gridlock