Protests spread in US as ballot counting drags on 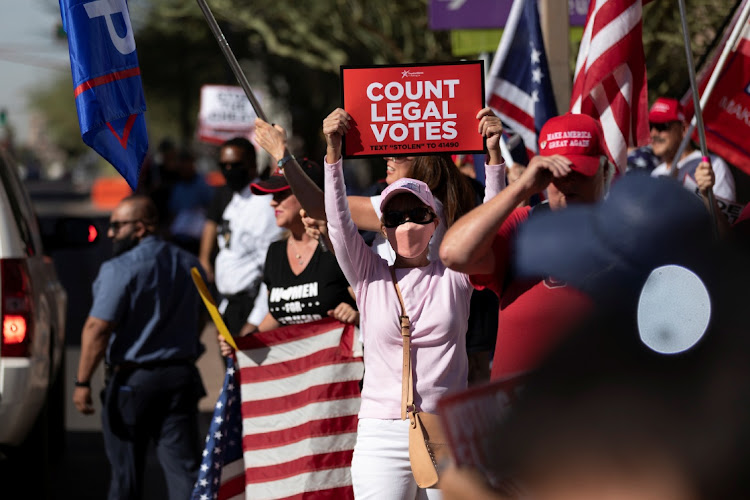 Supporters of US President Donald Trump hold a sign in front of the Phoenix city hall, in Phoenix, Arizona, the US, November 5 2020. Picture: REUTERS/CHENY ORR

Philadelphia —  A second day of protests over the integrity of the US presidential election spread in Philadelphia and other cities as ballot counting dragged on in a handful of states that will decide the outcome.

Supporters of Joe Biden have rallied about the slogan to “count every vote”, believing a rigorous  tally of ballots will ensure Joe Democratic presidential candidate Biden beats Republican President Donald Trump. Some ardent Trump backers have countered with the slogan “protect the vote” in support of his campaign's efforts to have some categories of ballots, including some votes submitted by mail, discarded.

Both factions appeared outside a vote-counting centre in Philadelphia on Thursday morning, where election staff steadily worked through a mountain of uncounted mail-in ballots that will determine whether Biden or Trump will take Pennsylvania's crucial 20 Electoral College votes.

A group of Trump supporters held Trump-Pence flags and signs saying: “Vote stops on Election Day” and “Sorry, polls are closed.” Across the street were Biden supporters, who danced to music behind a barricade.

“We can't allow the ballot counters to be intimidated,” said Bob Posuney, a Biden-supporting retired social worker with a “count every vote” T-shirt.

In Harrisburg, about a hundred Trump supporters gathered on the steps of the Pennsylvania state capitol building on Thursday afternoon as part of a “Stop the Steal” rally organised by conservative activist Scott Presler. Some carried Trump signs, others American flags, and a few wore T-shirts emblazoned with a QAnon logo.

Republican representative Jim Jordan of Ohio, an outspoken supporter of Trump, said at the rally he was concerned about ballots that arrived without a clear postmark.

“The administration wants to count every legal vote, every legitimate ballot,” Jordan said in an interview. “This is the closest election we've maybe ever had. You don't want ballots that arrived after the Election Day with an indistinguishable postmark.”

Earlier on Thursday, a state appellate court ruled that Republican observers could enter the Philadelphia building where poll workers were counting ballots.

In response, city election officials moved a barrier keeping the public off the counting floor to within six feet of the closest counting table, said Kevin Feeley, a spokesperson for the elections office. No-one from either the Biden or Trump campaigns is being allowed to stand at the tables while the counting goes on, he said.

Though counting was already completed in Michigan, which news outlets projected Biden had won, a few dozen Trump supporters waved flags and signs outside a Detroit counting centre.

In Wisconsin, Bobbie Dunlap, an information technology worker who lives in Genoa City, complained that she voted in person for Trump on election day but her vote still not been marked as processed on Wisconsin's website, though counting remains under way in the state.

“We are organising a peaceful march on the capital to ask for a full audit of the election here in Wisconsin,” she said. Trump's campaign has called for a recount in the state.

In Washington, a procession of cars and bicycles, sponsored by activists from a group called Shutdown DC, paraded slowly through the streets of the capital to protest “an attack on the democratic process” by Trump and his “enablers”, according to its website.

Most demonstrations in cities about the country have been peaceful and small — sometimes amounting only to a few dozen people with signs standing in a city centre — as Biden's path to victory looks a bit more assured than Trump's, even though either outcome remains possible.

On Wednesday, police in Portland, US declared riots, arrested 11 people and seized fireworks, hammers and a rifle, as Oregon governor Kate Brown activated the National Guard in response to protests on the night after voting in the US presidential election.

In New York, police said they had made about 50 arrests in protests that spread in the city late on Wednesday.

He's been telling lies ever since he could talk, and makes a mockery of everything that's good and decent
Opinion
10 months ago

The US economy is staggering; a divided society is seething with loathing and fear
News & Fox
10 months ago

President Donald Trump moved to withdraw from the accord exactly one year ago, abandoning a global effort to curb carbon emissions and slow global ...
World
10 months ago
Next Article

Trump leads in Florida and other battlegrounds, Biden counts on Rust Belt ‘blue ...

Trump leads in Florida and other battlegrounds, Biden counts on Rust Belt ‘blue ...