National Guard deployed in Philadelphia amid protests over another police killing 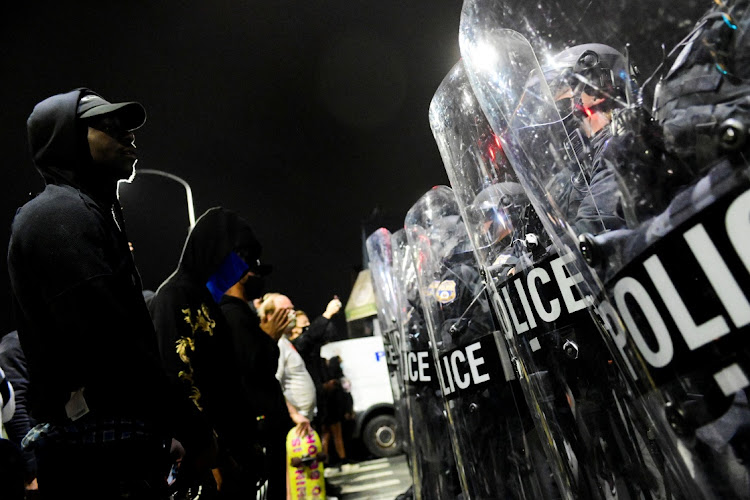 Demonstrators clash with riot police during a rally after the death of Walter Wallace, who was shot by police, in Philadelphia, the US, October 27 2020. Picture: REUTERS/BASTIAAN SLABBERS

Philadelphia — Looting, violent confrontations and arrests were reported in Philadelphia during a second night of protests over the October 26 killing of a black man, Walter Wallace, by police days before  the US presidential election

Pennsylvania’s governor Tom Wolf  deployed the National Guard after the police shooting on Monday sparked protests, the Philadelphia Inquirer reported, just a week before the swing state will help decide the election.

Wolf sent the National Guard to Philadelphia as demonstrators clashed with police and looted some shops after the death of a 27-year-old Wallace. He was fatally shot by police, who said he was armed with a knife. Wallace’s family said they had called for an ambulance to get him help with a mental health crisis, not for police intervention, the Associated Press reported.

The shooting was filmed and released on social media.

Wallace's father, Walter Wallace senior, appealed for calm out of respect for his son and family. “I don't condone no violence, tearing up the city, looting of the stores, and all this chaos,” he told reporters and a gathering of people. “It's an SOS to help, not to hurt.”

Thirty police officers were treated for cuts and bruises overnight, caused in most cases by bricks, rocks and debris thrown by protesters, a police spokesperson told The New York Times.

US President Donald Trump, who is seeking a second term in office, has made policing a top campaign issue, with the White House overnight saying his administration is ready “to deploy any and all federal resources to end these riots”.

Philadelphia and its largely minority population ranks as the largest city in Pennsylvania, a crucial battleground state in the race between Trump and Democratic challenger Joe Biden, who has said he supports the police but wants to address needed reforms to address racial inequalities, among other issues.

Tuesday's rallies began peacefully but grew confrontational as  darkness fell, just as on the previous day. Police turned out in force to cordon off a West Philadelphia commercial district that was looted the previous night.

But looters broke into businesses elsewhere, including in the city's Port Richmond section, aerial news video from WPVI television showed. At times, police in riot gear shoved protesters back from barricade lines.

Tensions have stayed high at demonstrations across the nation since the May 25 death of George Floyd after a Minneapolis police officer knelt on his neck for nearly nine minutes.

New York police arrested about 30 people as hundreds of protesters took to the streets of Brooklyn late on Tuesday after the Philadelphia shooting.

The scene in Philadelphia resembled those in Minneapolis and other cities in recent months: a peaceful protest gives way after dark to looting and clashes with police.

The events have been leveraged for political purposes in the campaign for Tuesday's election, with liberals arguing for racial justice and police reform while conservatives decry the chaos and property damage.

“Our hearts are broken for the family of Walter Wallace junior, and for all those suffering the emotional weight of learning about another Black life in America lost,” Biden said on Twitter. “Walter's life mattered.”

The new, ultra-conservative US Supreme Court justice may also help strike down Obamacare just a week after the US election
World
9 months ago

ISMAIL LAGARDIEN: Next president of the US will have his hands full restoring its standing

Victory in the election will be a poisoned chalice as the US is in decline, except when it comes to its military power
Opinion
9 months ago
Next Article