The new, ultra-conservative US Supreme Court justice may also help strike down Obamacare just a week after the US election 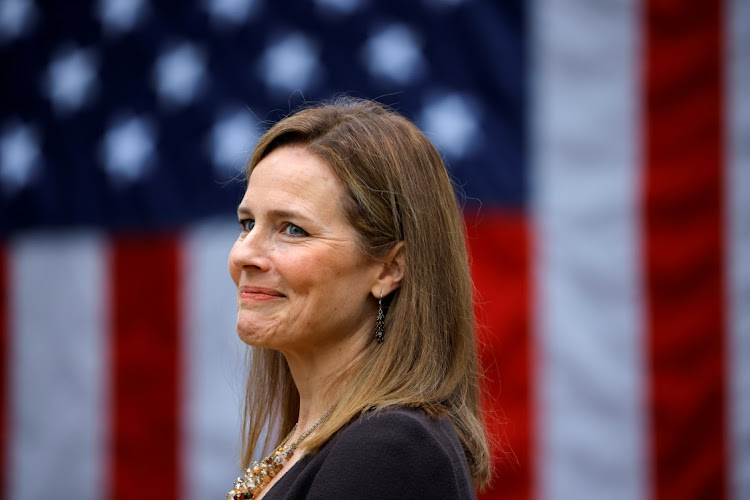 Washington — Newly confirmed conservative US Supreme Court justice Amy Coney Barrett faces a barrage of politically fraught cases in her first days on the job, as the court weighs election disputes and prepares to hear a challenge to the Obamacare health law.

On Monday, the Republican-controlled Senate pushed through the confirmation over Democrats’ objections to an appointment so close to the November 3 presidential election. President Donald Trump, who nominated Barrett, has said he expects the court to ultimately decide the result of the election between him and Democrat Joe Biden.

Barrett (48) who will be formally sworn in by chief justice John Roberts on Tuesday, joins the court with two election issues already awaiting her from key battleground states North Carolina and Pennsylvania.

The court would be expected to act on both before election day, with Barrett, previously an appeals court judge and legal scholar as part of the court’s new 6-3 conservative majority. No Supreme Court justice has ever been confirmed so close to a presidential election.

“I cannot think of any other situation like this,” said Rick Hasen, an expert on election law at the University of California, Irvine School of Law. “It really is a potential baptism by fire.”

One week after the election, on November 10, the court hears a case in which Republicans, including Trump, are asking the court to strike down the 2010 Affordable Care Act, commonly known as Obamacare.

During Barrett’s Senate confirmation hearing two weeks ago, Democrats focused on both Obamacare and election cases in voicing opposition to her confirmation and urged her to step aside from both. Barrett refused to make such a commitment. Justices have the final say on whether they step aside in a case.

At a White House ceremony on Monday night, at which conservative Supreme Court justice Clarence Thomas administered to her one of the two oaths of office that justices must take, Barrett pledged her independence from politics.

“This separation of duty from political preference is what makes the judiciary distinct,” she said.

The political pressures put Barrett in a difficult position and she may tread carefully, said Jessica Levinson, a professor at Loyola Law School in Los Angeles. “She could be on the court for four decades. I don’t think she wants her first big ruling to be raising a question about her independence.”

Trump has said he wanted Barrett to be confirmed before election day so she could cast a decisive vote in any election-related dispute, potentially in his favour.

The US Supreme Court has only once decided the outcome of a US presidential election — the disputed 2000 contest ultimately awarded to Republican George W Bush over Democrat Al Gore.

The justices have already tackled multiple election-related emergency requests this year, some related to rules changes prompted by the coronavirus pandemic.

On Monday night, the conservative justices were in the majority as the court, on a 5-3, vote declined to extend mail-in voting deadlines sought by Democrats in Wisconsin.

Last week, in a stark sign of how Barrett’s appointment could affect such cases, the court split 4-4 in a case from Pennsylvania, handing a loss to Republicans hoping to curb the counting of mail-in ballots received after election day. On Friday, Republicans asked the court to block the mail-in ballot counting in Pennsylvania, knowing that Barrett was about to be confirmed.

The conservative majority even before Barrett’s appointment has generally sided with state officials who oppose court-imposed changes to election procedures to make it easier to vote during the pandemic.

The Obamacare case is the third major Republican-backed challenge to the law, which has helped about 20-million Americans obtain medical insurance. It also bars insurers from refusing to cover people with pre-existing medical conditions.

Republican opponents have called the law an unwarranted intervention by government in health insurance markets.

Barrett, in the past, criticised those two rulings. Democrats opposing her nomination emphasised that she might vote to strike down Obamacare, though legal experts think the court is unlikely to do so.

The court hears another major case on November 4 concerning the scope of religious-rights exemptions to certain federal laws. The dispute arose from Philadelphia’s decision to bar a local Roman Catholic entity from participating in the city’s foster-care programme because the organisation prohibits same-sex couples from serving as foster parents.

The court began its current term on October 5 short-handed following the death of Barrett’s predecessor, liberal justice Ruth Bader Ginsburg. If the court is divided 4-4 in any of the cases argued before Barrett was appointed, it could hold a second round of oral arguments so Barrett can participate.

While relations between the neighbours would almost certainly improve, the Mexican president has said he will defend the primacy of the state in ...
World
9 months ago

NICOLE FRITZ: Thankfully, SA has been spared a spectacle like Barrett vs ...

NICOLE FRITZ: Thankfully, SA has been spared a spectacle like Barrett vs ...