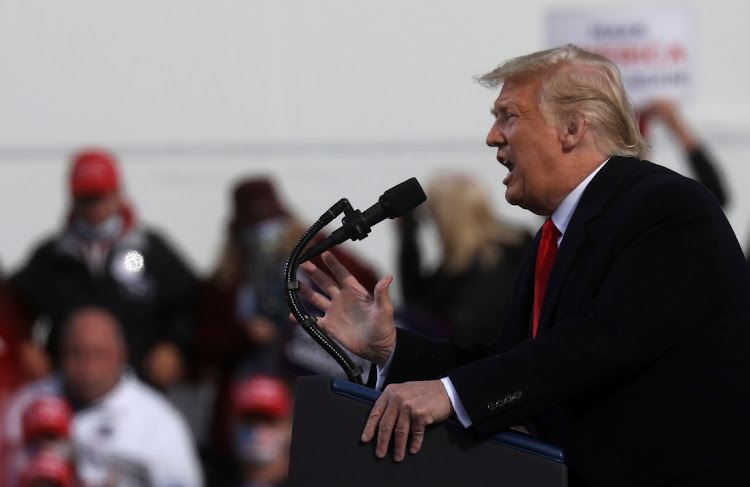 Manchester — With US coronavirus cases at a record level, President Donald Trump on Sunday repeated his refrain that the nation is "rounding the turn" in the pandemic, while Vice-President Mike Pence pressed ahead with campaigning despite positive Covid-19 tests among multiple aides.

With nine days to go before the November 3 election in which Democrat Joe Biden is challenging the Republican president, the White House cited Pence's status as an "essential worker" as justification for his travel despite exposure to his chief of staff, Marc Short, who tested positive on Saturday.

The US on Friday registered 84,244 new coronavirus cases and 79,852 cases on Saturday, the nation's largest daily totals since the beginning of a pandemic that has killed about 225,000 Americans and left millions of people jobless.

As  Pence campaigned in North Carolina on Sunday, Trump addressed a rally at an airport in New Hampshire.

While numerous Covid-19 vaccines are being developed, none has been approved for use in the US.

It marked the latest coronavirus infections in the White House, which have included Trump, first lady Melania Trump, their son Barron and numerous aides and associates.

The new infections offered a reminder of the way Trump — who was in hospital for three nights in October after contracting Covid-19 — and those around him have downplayed the advice of public health experts to wear masks and observe social distancing guidelines to stem Covid-19 transmission.

In addition to dominating the campaign policy debate — with Trump insisting the US is "rounding the turn" on the crisis, while Biden has blasted the president's disjointed response — the pandemic has changed Americans' voting habits, with 58.7-million ballots already cast.

Trump also was due to campaign in Maine on Sunday. Biden had no campaign events scheduled for Sunday. While Biden holds a wide lead in national opinion polls, they show closer contests in some of the battleground states that could decide the outcome.

Asked by CNN why Pence was not following US Centers for Disease Control and Prevention guidelines to quarantine for 14 days after such exposure, Meadows on Sunday cited the vice-president's status as "essential personnel."

Speaking in Detroit as she campaigned in the battleground state of Michigan, Harris criticised Pence for continuing to travel, saying, "He should be following the guidelines."

Trump has mocked Biden for wearing a protective mask.

Asked why the Trump campaign is not requiring people attending rallies to wear masks, Meadows said the campaign offers masks to attendees but, "We live in a free society."

Former New Jersey governor Chris Christie, who himself caught Covid-19 and was in hospital for a week after spending several days at the White House without wearing a mask, on Sunday said he was "surprised" Pence would continue campaigning.

"Everybody's gotta put the health of the people they're going to be in touch with first," he said.

Infectious diseases expert  Sandra Nelson of Harvard Medical School and Massachusetts General Hospital said it appeared that Pence would be at high risk for becoming infected and transmitting infection.

"With multiple members of his office testing positive this would be considered a work-based cluster. Anytime there is a cluster like this I would advise that the entire office transition to remote work for 14 days," Nelson said.

The US has the most cases in the world at 8.5-million and the most fatalities with 224,000 lives lost
World
11 months ago

Trump and Biden get personal in final showdown

President and Democratic challenger debate a range of topics including coronavirus, economy, race and climate change
World
11 months ago

While relations between the neighbours would almost certainly improve, the Mexican president has said he will defend the primacy of the state in ...
World
11 months ago
Next Article