The US president accuses the interviewer of bias 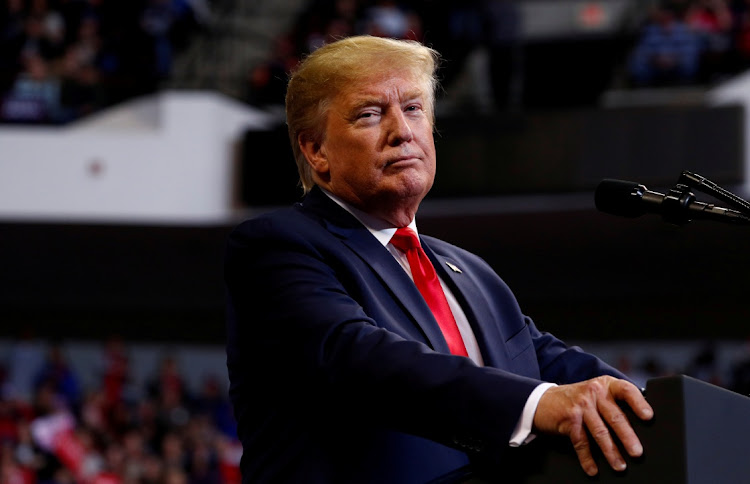 Washington — President Donald Trump posted the entirety of his contentious interview with “60 Minutes” correspondent Lesley Stahl on Thursday — before CBS News aired the footage — in what he described as an effort to expose “the bias, hatred and rudeness” of the network.

The video, taken from a White House camera in the room for archival purposes, includes Stahl challenging the president about his political rallies, coronavirus response, and health-care plans. It shows Trump repeatedly expressing frustration with Stahl’s questions, and her efforts to challenge his misleading statements.

The White House footage shows Stahl opening the interview by asking Trump if he was “ready for some tough questions”.

Trump repeatedly complained about the comment throughout the nearly 38-minute interview. The president said that it was “no way to talk” and accused the reporter of framing her questions “inappropriately”.

“You’re so negative,” Trump said. “You just come in here with this negative attitude.”

The pair proceeded to spar over myriad topics: whether Trump has been joking when begging suburban women to like him on the campaign trail; whether Trump does enough to encourage his supporters to wear masks; whether scattershot executive actions on health-care policy amount to a replacement for Obamacare; and whether the president’s propensity for name-calling alienated voters.

The president repeatedly diverted from questions by challenging offhand remarks by Stahl. Trump disputed her statement that he had called federal infectious disease expert Anthony Fauci an “idiot” on a call Monday with campaign staff that reporters were invited to listen to.

Trump rejected her suggestion that he had called for Michigan governor Gretchen Whitmer to be arrested. Trump seemed to include Whitmer among a group of Democrats he said at a recent rally should “all” be locked up. He also challenged Stahl’s assertion that his recent political rallies were smaller than in previous years.

Trump spent considerable time in the interview complaining that the media had not done more to cover business deals undertaken by Democratic nominee Joe Biden’s son, while accusing former president Barack Obama of spying on his campaign. When Stahl noted there was no evidence Obama had done so, Trump claimed without substantiation that his accusations had been “totally verified”.

Trump also said that he was hopeful the supreme court would invalidate the Affordable Care Act, known as Obamacare, in its coming review of the law. “I hope that they end it,” Trump said. “It will be so good if they end it.”

Repeatedly pressed by Stahl on what would happen to Americans who could lose their insurance or protections for pre-existing conditions, Trump said his administration had — or would have — “various plans”.

Stahl told Trump that he had made earlier statements promising a plan “will be here in two weeks — it’s going to be something like we’ve never seen before. And of course we haven’t seen it. So why didn’t you develop a health plan?” Trump said: “It is developed, it is fully developed, it is going to be announced soon.”

If he loses the election, Trump said he expected a Biden administration to investigate him personally.

“Oh, he probably will, because I think he’s a very dishonest guy,” Trump said.

The president again seemed to criticise his attorney-general, William Barr, for not more aggressively pursuing charges against Obama administration officials in the weeks before the campaign.

“They’re very lucky because the evidence is overwhelming and attorney-general Barr is a great gentleman,” he said.

CBS News criticised the White House’s decision to release the footage, calling it an “unprecedented” violation of their interview agreement.

“Few journalists have the presidential interview experience Lesley Stahl has delivered over her decades as one of the premier correspondents in America and we look forward to audiences seeing her third interview with President Trump and subsequent interview with vice-president [Mike] Pence this weekend,” the network said in a statement.

The White House posted Pence’s interview with Stahl shortly after on Trump’s Facebook page. At the end of that interview, Stahl told Pence that he and the president had insulted the news programme by ignoring her questions and instead only offering campaign rhetoric.

“I feel that you both have insulted 60 Minutes by not answering many of our questions and by giving set campaign speeches that we’ve heard both of you give at rallies,” Stahl said.

Pence responded: “I’ve answered every single one of your questions.”

Trump’s decision to release the footage came after days of criticising Stahl, including tweeting a picture of the reporter not wearing a mask in the aftermath of the interview.

Trump’s frustrations with the interview first became known after CNN reported that he had refused to participate in a planned “walk-and-talk” with Pence following his sit-down with Stahl.

At the end of the clip posted by the White House, an unnamed man is heard saying that they would bring the vice-president in after five more minutes of discussion.