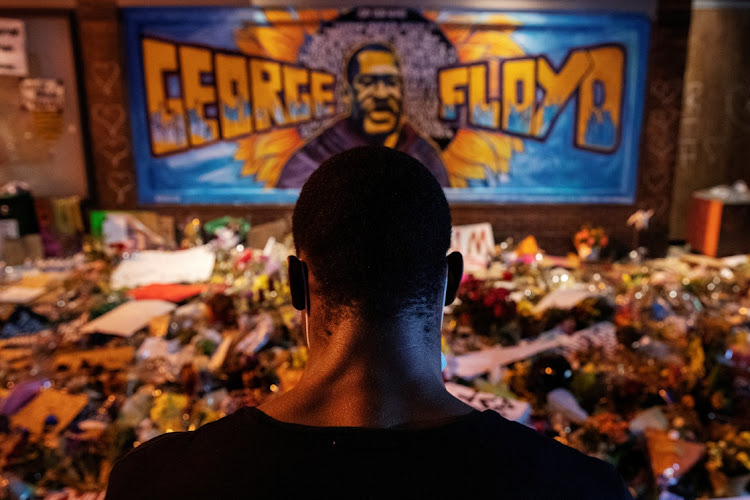 A makeshift memorial honouring George Floyd, at the spot where he was taken into custody and died, in Minneapolis, June 1 2020. Picture: REUTERS/LUCAS JACKSON

Wilton — A judge dismissed a lesser murder charge against former Minneapolis police officer Derek Chauvin but said he still has to face the most serious murder charge in George Floyd’s death in May, according to a court ruling released on Thursday.

Hennepin County judge Peter Cahill said prosecutors did not have probable cause to charge Chauvin with third-degree murder but said the evidence supported taking a second-degree murder charge, which could lead to decades in prison, to trial.

Cahill described in detail how Chauvin used his knee to press Floyd’s neck and face “into the unforgiving concrete of Chicago Avenue” in Minneapolis even after Floyd pleaded that he could not breathe and then became unresponsive.

Cahill also upheld a manslaughter charge against Chauvin and all six charges against three other officers — Thomas Lane, J Alexander Kueng and Tou Thao — for allegedly aiding and abetting Chauvin in the murder. Kueng and Lane helped hold Floyd down by restraining his back and legs, Cahill noted, while Thao kept a group of bystanders at bay.

Minnesota attorney-general Keith Ellison portrayed the ruling as a win for his office.

“The court’s decision to dismiss just one of the lesser charges against just one of the defendants — while leaving intact all the charges against the other three defendants — is based on how appellate courts have interpreted the statute in question,” Ellison said in a statement. “We are considering our options in light of the court’s strong order on the remaining charges.”

Chauvin, who is white, had been charged with second- and third-degree murder and manslaughter in the death of Floyd, a black man. Videos of the incident set off nationwide protests over police brutality and systemic racism.

In his ruling, Cahill said a third-degree murder charge was appropriate in cases in which a defendant’s actions were “eminently dangerous to other persons” and were not specifically targeted at the person who died.

“The evidence presented by the state does not indicate that Chauvin’s actions were eminently dangerous to anyone other than Floyd,” Cahill wrote in his ruling.

Monuments ‘glorifying’ SA’s divisive past should be relocated

The media and analysts portray black liberal DA members as ‘puppets of the whites’, but breaking news: the DA is the only party that doesn’t ask me ...
Opinion
9 months ago
Next Article

JONATHAN JANSEN: For too long racism has walked the hallowed halls of elite ...

JONATHAN JANSEN: For too long racism has walked the hallowed halls of elite ...