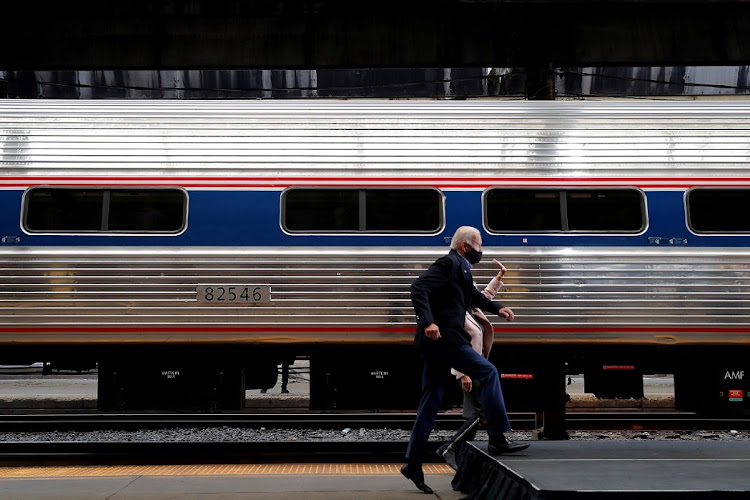 Joe Biden and his wife Jill in front of their campaign train during a stop in Pittsburgh, Pennsylvania. Picture: MIKE SEGAR

Washington — Amtrak supporters are counting on Joe Biden to deliver a long-sought victory on a rail tunnel between New York City and New Jersey that they say is pivotal to meeting passenger demand in the busy northeastern US.

The tunnel, at an estimated cost of more than $11bn, would carry Amtrak and New Jersey Transit commuter trains under the Hudson River as part of the Gateway Programme. Supporters say the project has languished amid feuding between President Donald Trump and Democratic governors in New York and New Jersey — though the administration says it is working to complete an environmental review.

Gateway advocates say Biden, whose commuting between Delaware and Washington aboard Amtrak as a senator became part of his biography, is likely to put his weight behind the new tunnel. He is so closely associated with the railroad that the station in his hometown of Wilmington, Delaware, is named after him.

“They don’t call him ‘Amtrak Joe’ for nothing,” said Larry Willis, president of the American Federation of Labour and Congress of Industrial Organisations’s transportation trades department. “He’s probably the most famous passenger, but also the biggest supporter of passenger rail as a senator, vice-president and, hopefully, president.”

A former interim executive director of the Gateway Development Corporation, John Porcari, is advising the Biden campaign and has been mentioned as a possible transportation secretary in a Biden administration.

The Biden campaign didn’t respond to a request for comment on the project. On its website, however, Biden promises to spark “the second great railroad revolution” if he is elected. “Biden will make sure that America has the cleanest, safest, and fastest rail system in the world — for both passengers and freight.”

Amtrak says the project would allow for twice as many trains to run on tracks under the river, including those that are part of its Northeast Corridor service that connects Boston, New York and Washington.

The tunnel was heralded by then-president Barack Obama and Biden as a breakthrough for rail passengers on the Northeast Corridor, who have long suffered with delays emanating from the New York area bottleneck. Now, Amtrak and New Jersey Transit’s sole link between New Jersey and New York is a tunnel that was damaged by Hurricane Sandy and is more than a century old.

The Hudson tunnel project, then known as the Access to the Region’s Core project, was killed in 2010 by Chris Christie, a Republican who became governor of New Jersey by defeating the Democratic incumbent, Jon Corzine, the year before.

The project was later revived by Amtrak in 2011 as part of its broader Gateway Programme, but progress has slowed during the Trump administration though the Federal Railroad Administration disputes the idea that the administration is dragging its feet.

The agency, in a statement, said it is working with the various railroads and state agencies to complete a required environmental impact statement that is “technically sound, and legally sufficient”.

Amtrak indicated it was prepared to work with either candidate.

“We look forward to working with any administration and Congress to expand service nationwide and improve reliability, safety and performance through our critical infrastructure and fleet projects,” the passenger carrier said in a statement.

New Jersey Democratic senator Cory Booker vowed to push hard for the project in the next Congress.

“Despite Trump’s best efforts to derail it, Gateway remains one of the most critical infrastructure projects in the nation, and I will continue working with our partners to move it forward,” Booker said in a statement.

Ed Wytkind, president of EW Strategies and a senior adviser to labour organisations, transit agencies and non-profit groups, said Biden is likely to want to get the Gateway project and other Amtrak priorities rolling early in his first term if he wins.

“He says he wants to champion a ‘second rail revolution,’ and you can’t do that without Gateway,” the Baltimore and Potomac tunnel in Baltimore and the Long Bridge project that would improve transportation across the Potomac River from Virginia to Washington, Wytkind said. “If you don’t build those projects, plus do station modernisation and expand the right of way where you can add tracks, you won’t have a second rail revolution.”

Like other transportation services, Amtrak has been hammered by the coronavirus pandemic. Ridership on the national railway has fallen more than 80% compared to a year ago and Amtrak leaders have pleaded with lawmakers to approve $2.84bn in addition to its previously requested $2bn in base appropriations as Congress and the White House continue to discuss another round of coronavirus stimulus.

Absent the federal help, Amtrak CEO Bill Flynn warned in a statement that “impacts could include a reduction of corridor trains as state partners suspend services, as well as the deferment of numerous capital projects and procurements critical to the railroad, resulting in a potential corresponding loss of an additional 2,400 jobs”.

At a time of year when many people in Japan should be getting out of the city, the country’s super-fast trains are almost empty
World
8 months ago

The 15.4km tunnel, dubbed Switzerland’s construction project of the century, connects Northern Europe to the Mediterranean
World
9 months ago
Next Article