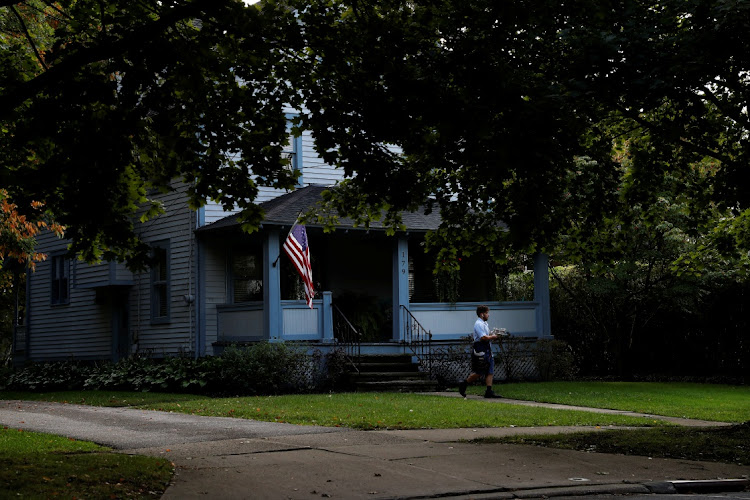 A US Postal Service worker leaves home after delivering mail in Chagrin Falls, Ohio, US, in this September 29 2020 file photo. Picture: REUTERS/Shannon Stapleton

Washington — In August, a video posted on social media by a Florida woman named Tina Brown outlined what she said were potential hazards with mail-in election ballots.

Brown said envelopes for registered Democratic voters included a D in the bar code, while envelopes for Republicans contained an R. She then asserted that a left-leaning mail carrier could use the identifiers to suppress Republican votes while saying “let’s just chuck it”.

But Brown’s video omitted the ballots were for separate party primaries, leaving the impression that they were for the general election in November.

Even so, the Facebook video gained 175,000 views from mid-August to late September and inspired similar false content across Facebook, Twitter, YouTube and TikTok. That the bogus say spread so easily across the internet highlights the challenges facing social media companies such as Facebook and Twitter, both of which are trying to crack down on false information, particularly around voting, even as a torrent of misinformation continues.

It also shows the challenges facing government officials, who are trying to manage a presidential election in the midst of a global pandemic and a sharp uptick in online posts about mail-in voting. Volume has surged 91% in recent months, and much of it involves false information, including that mail-in ballots will not count and that mail-in voting creates fraud, according to new research from Clemson University.

Such falsehoods have been fuelled by President Donald Trump’s rhetoric, according to researchers. In last Tuesday’s presidential debate, he cited unproven allegations about fraud associated with mail-in ballots as a reason for telling his supporters to “go into the polls and watch carefully”, a comment that cast doubt on the integrity of the election.

A new Harvard University working paper — which analysed more than 5-million tweets, 75,000 Facebook posts and 55,000 media stories online — found that the Trump campaign and Fox News were the driving force behind false claims about mail-in ballots, with social media playing a supporting role. Clemson’s research found that Trump’s Twitter account has been the most influential in the online conversation about mail-in voting.

More broadly, experts believe that vote-by-mail conspiracies would likely be relegated to the fringes of social media were it not for Trump’s consistent use of his Twitter feed as well as TV appearances, rallies, press conferences and the recent presidential debate to malign mail-in ballots.

While assessments by the US intelligence community and others indicate that mail-in voting does not compromise the integrity of the election outcome, disinformation researchers are raising concerns about the level of fake claims being spread by domestic social media users amid inadequate pushback from social media companies.

In a recent analysis of social media platforms, the Election Integrity Partnership found that none of them had “clear, transparent policies” regarding content that “aims to delegitimise election results on the basis of false claims”. More broadly, it found that while platforms generally agree that “special attention” is required for false information related to the election, “few platforms have comprehensive policies on election-related content.”

Facebook and Twitter — both of which announced expanded protocols for promoting election information accuracy last month — have inconsistently enforced their policies that treat content they deem newsworthy or in the public interest differently from other posts, the analysis found.

In the case of Brown’s video, Twitter removed all but one post containing the video but did not act on instances where the same misleading comment was made in tweets, according to the Election Integrity Partnership. Facebook allowed the video to remain online but labelled it with links to additional context.

A Twitter spokesperson said it is against the company’s rules “to use our service for the purpose of manipulating or interfering in elections. This includes posting or sharing content that may suppress participation or mislead people about when, where or how to participate in an election.” Twitter uses “strong enforcement action” and constantly updates its rules to “protect the online public conversation on mail-in ballots,” the spokesperson said.

A Facebook representative said the Election Integrity Partnership’s analysis reflected well on the company relative to other social media platforms. “We’ve implemented strong policies against voter suppression that we apply evenly to everyone,” the company said in a statement.

When posts on Facebook do not violate policies but discuss voting more generally, the company labels it with additional information about the election process. “We are constantly improving these systems, but are encouraged by the progress we’ve made,” the representative said.

In an interview with a local television station, Brown said she posted the video to educate voters and that the reaction has been “crazy.” Bloomberg could not reach her for comment.

“The picture is alarming right now,” said Daniel Bush, a disinformation researcher at Stanford University, who published a study of the misleading narrative about ballot envelope bar codes. The majority of content about mail-in voting now on social media “is hostile towards it and based on misrepresentation”, he said.

Online chatter on this topic has been dominated by users in their 50s and 60s, the Clemson analysis found. And tweets about mail-in voting commonly included the words “fraud,” “fraudulent,” “dismantle,” “Trump” and “planning.” Meanwhile, on Reddit, unfounded claims are spreading about mail carriers throwing away ballots and judges taking bribes to stuff ballot boxes, the analysts found.

“The narratives that have spread the most quickly are based on some granular fact about the voting process taken out of context,” said Isabella Garcia-Camargo, a computer science researcher at Stanford. Garcia-Camargo and Bush are both part of the Election Integrity Partnership.

Many of the posts they have found contain a mix of true, false and out-of-context information about how to vote. For example, they found that a cross-platform network of Trump supporters criticising California governor Gavin Newsom spread posts that accurately noted that California voters were automatically enrolled for mail-in ballots amid the pandemic. However, they inaccurately stated that voters who did not go online and opt out would be turned away from the polls.

The partnership found that right-wing users propagated misleading images and videos that falsely suggested that Democrats sought to throw away ballots and commit fraud through third-party ballot collection, known as harvesting.

Feeding on the confusion, the Kremlin has seized on the false claims about mail-in ballots. Since March, Russia state media and proxy websites have “denigrated vote-by-mail processes, alleging they lack transparency and procedural oversight, creating vast opportunities for voter fraud”, according to a bulletin from the US department of homeland security, which was previously reported by ABC News.

Election officials are working to counteract the false information being spread online. Connecticut, for instance, has invested in a public education campaign and hired an analyst to watch social media for disinformation about the logistics of the election. In Ohio, secretary of state Frank LaRose posted a video of himself debunking the video about ballot bar codes.

Officials in Sonoma County, California, tweeted in  Spanish and English that voters should not trust photos circulating online of vote-by-mail envelopes that appeared to be tossed in county recycling bins. “Help us stop a false report,” the official post said. “The pictures are of old empty envelopes from the November 2018 election that were disposed of as allowed by law,” the county’s tweet explained.

Federal authorities, meanwhile, have urged voters to be sceptical of social media and get their information about how to vote directly from trusted state and local election offices. Still, researchers worry that the onslaught of false information on social media may drown out the voices of reason.

“If somebody were to search for information about mail-in voting or how to move forward with that, and they are unfamiliar with the internet structure and how social media channels work, it would be hard for them to find information about how to effectively do it,” said Will Henderson, who studies disinformation at Clemson University.

Rand looks all set for a rough ride this week

US politics goes to the movies

US politics goes to the movies