Donald Trump says he will leave hospital on Monday evening

US president says he is feeling good, and urges Americans not to fear Covid-19 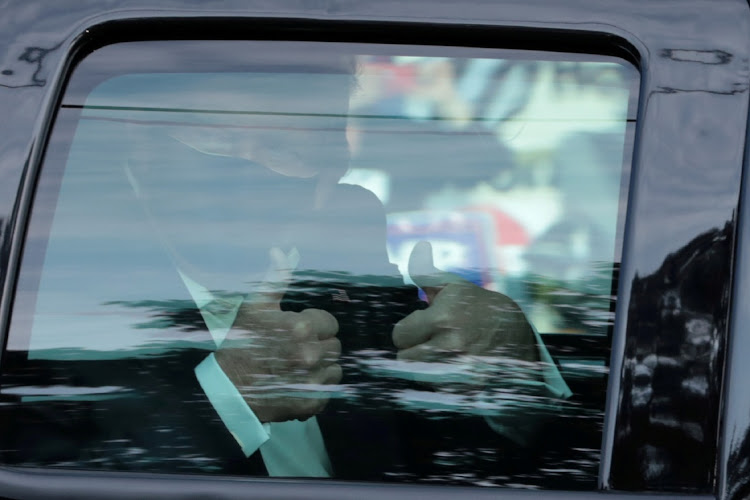 US President Donald Trump gestures from a car as he rides in front of the Walter Reed medical centre in Bethesda, Maryland, the US, October 4 2020. Picture: REUTERS/CHERISS MAY

Washington — President Donald Trump said on Twitter that he will  leave Walter Reed hospital on Monday evening after being treated for Covid-19, calling on Americans not to fear the novel coronavirus.

“Don’t let it dominate your life,” Trump said on Monday in a post on the social media site. “We have developed, under the Trump administration, some really great drugs & knowledge. I feel better than I did 20 years ago!”

The novel coronavirus has infected more than 7.4-million Americans and has killed more than 210,000 since February, including 475 on Sunday, according to data compiled by Bloomberg.

Trump has been in the hospital since Friday evening, after announcing early that morning he had tested positive for the virus. He was briefly administered supplemental oxygen at the White House before travelling to Walter Reed  medical centre, his doctor Sean Conley said on Sunday.

White House chief of staff Mark Meadows said earlier on Monday that a decision on Trump’s release from the hospital would be made after consultations with medical staff.

Trump’s condition on Monday was unclear. Conley will brief reporters later in Washington.

The White House had not provided any update on Trump’s health in more than 24 hours, and before announcing he plans to  leave the hospital, Trump himself had not said anything about his condition on Twitter since shortly after 5pm on Sunday.

McEnany said she is not experiencing symptoms of Covid-19, the disease caused by the virus.

Trump’s health improved over the weekend, said the people familiar with the matter, who asked not to be identified discussing his condition. The president has been eager to leave the hospital.

“We have further evaluations and consultations that have to take place between the president and his medical team,” Meadows said. “It’s going to be, at the earliest, this afternoon,” he said of the decision on Trump’s possible discharge.

With less than a month until election day, Trump’s hospitalisation has jolted the presidential campaign, forcing him to scrap rallies and other events as polls show him trailing Joe Biden nationally and in swing states. His campaign has launched “Operation Maga”, referring to his “Make America Great Again” slogan, to flood the campaign trail with top surrogates such as Vice-President Mike Pence, Trump’s family and others.

Discussion of Trump’s release comes after a weekend of mixed signals from Conley, who on Sunday disclosed for the first time that the president had been given supplemental oxygen and received a medication that’s typically used in more severe Covid-19 patients.

Asked why he did not disclose during Saturday’s briefing that Trump had received oxygen despite repeated questions about it, Conley said, “I was trying to reflect the upbeat attitude” of the team and the president.

Trump was taken to hospital on Friday evening after recording a fever and receiving supplemental oxygen that day. He had been diagnosed late on Thursday, after a close aide, Hope Hicks, also tested positive for the virus. Trump has since been given three different types of therapeutic drugs, including one typically used in more serious cases.

Meadows said on Monday that the president continued to improve overnight, after he made his surprise outing on Sunday, waving to supporters gathered outside from his motorcade. Trump on Monday resumed his campaign via Twitter, with a series of posts urging supporters to vote and reminding them that Monday is the last day to register in states including Florida and Arizona.

Trump had made an appearance on Fox News on Thursday night before disclosing on Twitter shortly after midnight on Friday that he had tested positive.

New Jersey governor Phil Murphy on Monday criticised Trump’s attendance on Thursday at a fundraiser at his Bedminster golf resort in the state, saying it ought to have been cancelled. The president went to the event despite knowing Hicks had tested positive.

“The thing that should have happened is that nobody should have come to New Jersey. That trip should have been cancelled,” Murphy said on CBS’s “This Morning.” He said separately on CNN that “Bedminster is a chapter in a long book” about the consequences of flouting social distancing and masking.