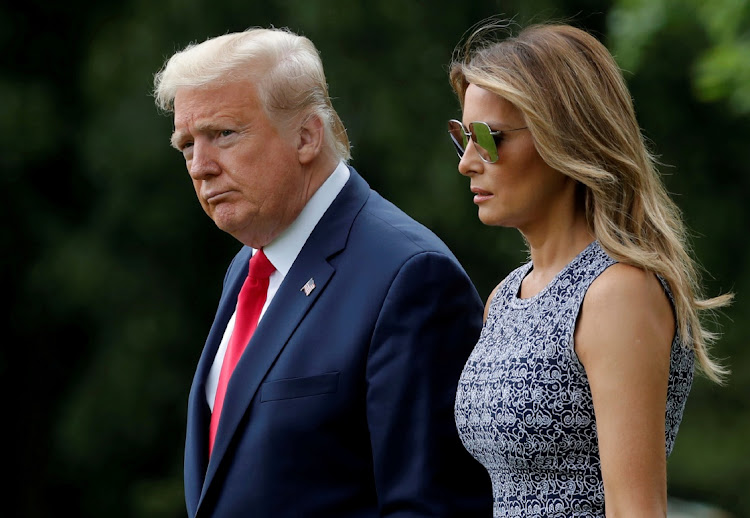 US President Donald Trump and first lady Melania Trump walk to the Marine One helicopter to depart for travel to the Kennedy Space Center in Florida from the South Lawn of the White House in Washington on May 27 2020. Picture: REUTERS/CARLOS BARRIA

Washington — President Donald Trump announced early on Friday that he and first lady Melania Trump had tested positive for Covid-19, shortly after one of his closest aides, Hope Hicks, had fallen ill with the coronavirus.

“Tonight, @FLOTUS and I tested positive for COVID-19. We will begin our quarantine and recovery process immediately. We will get through this TOGETHER!” Trump said on Twitter.

In a memo released early on Friday morning, Trump’s physician said that the president and first lady plan to remain at the White House “during their convalescence” and that the medical unit would “maintain a vigilant watch”.

“Rest assured I expect the president to continue carrying out his duties without disruption while recovering, and I will keep you updated on any future developments,” White House physician Sean Conley said.

After acknowledging in a Fox News interview on Thursday night that Hicks had tested positive, he tweeted that he and the first lady would “begin our quarantine process” as they awaited test results.

The 74-year-old president’s positive result is likely to sharpen already intense public attention on his ineffectual handling of the pandemic as he campaigns for re-election against Democrat Joe Biden, who leads in national polls.

It was not immediately clear how Trump contracted the virus that has killed more than 200,000 Americans. But Hicks tested positive after flying with him aboard Air Force One to the presidential debate in Cleveland on Tuesday and to a campaign rally in Minnesota on Wednesday.

“We spent a lot of time with Hope and others. So we’ll see what happens,” Trump said during the Fox interview with Sean Hannity.

Several other members of Trump’s circle tested positive for the virus earlier this year, including national security adviser Robert O’Brien.

His aides have worried that Trump’s lack of sleep during the final stretch of the presidential campaign could leave him especially vulnerable to infection. The president did not return to the White House until after midnight after his Tuesday and Wednesday trips. His age also puts him at greater risk for serious illness from the virus.

The development, while a source of concern for Americans, will make it harder for the president to continue trying to shift attention away from the virus and focus on his prized campaign issues, such as accusing Democrats of promoting a ruinous socialist agenda and allowing US cities to be overrun by violent protesters.

Trump has sought to diminish the significance of the virus amid surveys showing most Americans disapprove of his handling of the pandemic, which he has said would simply “disappear”. Trump has pushed for states to reopen their economies even as caseloads have surged.

The president, who initially downplayed the importance of wearing masks and later endorsed their use, has seldom worn a face covering in public and also has not followed recommendations about staying 1.8m away from others. The White House has said those precautions are not needed for Trump because people allowed close to him are tested for the virus.

Trump has said he had no regrets about his response to the pandemic, and argued that he “up-played it in terms of action” even though he told journalist Bob Woodward in a taped conversation that he downplayed the threat it posed to avoid scaring Americans. He again cast doubt on whether masks effectively prevent transmission of the virus.

“A lot of people don’t want to wear masks. There are a lot of people think that masks are not good,” Trump said in a September 15 town hall event with ABC News.

The president also has repeatedly hosted events where audience members did not wear masks or maintain distance from one another.

He held his first indoor campaign rally in months on September 13 at a manufacturing plant in Las Vegas, flouting a Nevada order banning indoor gatherings of 50 or more people or more.

“I’m on stage, and it’s very far away,” Trump said in an interview with the Las Vegas Review-Journal, defending his decision to speak to thousands of supporters, few of whom wore masks or practised social distancing. He spoke at a similar indoor gathering in Arizona the next day.

Days later, Trump spoke in front of hundreds of people on the South Lawn of the White House at a signing ceremony for diplomatic accords between the United Arab Emirates, Bahrain and Israel. Few of the attendees were tested for Covid-19.

Trump on August 27 appeared before a crowd of about 1,500 people on the South Lawn to accept the Republican Party’s presidential nomination. Though the Trump campaign said it followed “strict” safety protocols, the District of Columbia bans gatherings larger than 50 people. Few people in the crowd wore masks and White House officials said some, but not all, attendees were tested for Covid-19.

The president in late July began to publicly encourage Americans to wear masks if they cannot maintain social distance and avoid risky behaviour, after months of casting doubt on public-health recommendations and promoting unproven treatments.

In May, for instance, he said he took the antimalarial drug hydroxychloroquine as a preventive measure, days after vice-president Mike Pence’s press secretary tested positive for the virus. The Food and Drug Administration revoked emergency approval for the drug as a Covid-19 treatment a month later, citing a lack of effectiveness and harmful potential side effects.

If the Trump tax revelations reveal anything, it’s that there are two sets of rules: one for the rich, and another for everyone else
Opinion
11 months ago

When those in authority flout the rules, when countries don’t pay decent sick leave, and when there is no scientific support — expect pushback
Opinion
11 months ago