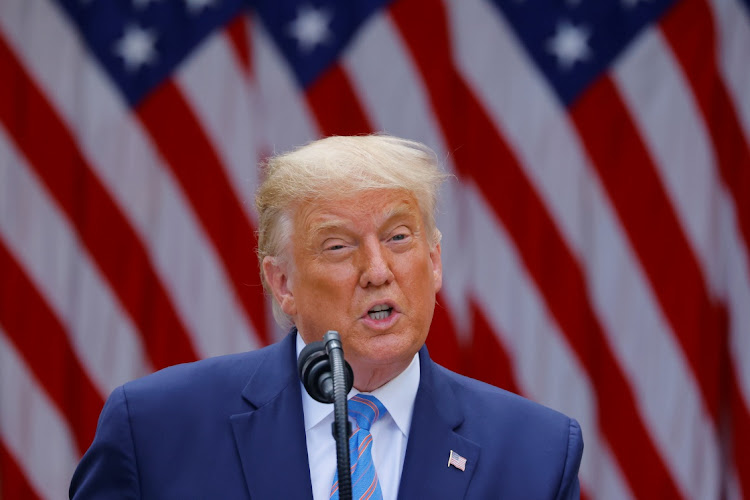 US President Donald Trump speaks at the White House in Washington, DC, the US, September 28 2020. Picture: REUTERS/CARLOS BARRIA

Washington — Democrats seized on a fresh line of attack on the eve of the first US presidential election debate, accusing Republican President Donald Trump of gaming the tax code after a report showed he paid paltry amounts of federal tax in recent years.

The self-proclaimed billionaire, who is seeking re-election in the November 3 vote, paid only $750 in federal income taxes in 2016 and 2017, after years of reporting heavy losses from his businesses to offset hundreds of millions of dollars in income, the New York Times reported on Sunday, citing tax-return data.

The report also said Trump paid no federal income tax in 10 of the previous 15 years through 2017, despite receiving $427.4m in 2018 from his reality television programme and other endorsement and other deals.

US House of Representatives Speaker Nancy Pelosi, a Democrat, said in an interview it was “not right” for Trump to be paying less in taxes than the average American family, adding that the president's debts raised questions of national security.

Jared Bernstein, one of Democratic presidential nominee Joe Biden's top economic advisers, said on Twitter that the Times report highlighted the need to simplify the tax code and make people such as Trump pay their fair share.

“The vast majority of us pay taxes and get on with life. But the richer you are, the more tax lawyers you employ, the more complex you can make your holdings — all of this can, as the piece shows reduce your tax liability to zero,” Bernstein said.

Trump has dismissed the Times report as “fake news”. On Monday, he tweeted that he had paid “many millions of dollars in taxes” but was entitled to depreciation and tax credits and was “extremely under-leveraged” in terms of his debt and assets.

The Fake News Media, just like Election time 2016, is bringing up my Taxes & all sorts of other nonsense with illegally obtained information & only bad intent. I paid many millions of dollars in taxes but was entitled, like everyone else, to depreciation & tax credits.....

White House spokesperson Kayleigh McEnany described the report as a hit job that was straight out of the Democratic playbook. “We've seen this play out before ... purported tax information dropping the eve of a debate. They tried this in 2016 and it didn't work,” she told Fox Business Network.

Some Trump supporters suggested the US department of justice should investigate how the Times had obtained Trump's tax data.

Trump and Biden will square off in their first debate in Cleveland, Ohio, on Tuesday. Trump carried Ohio in the 2016 election and almost certainly must do so again to win a second term. Polls show Biden leading in the state.

Biden also is ahead of Trump nationally and in a number of other key battleground states, according to polls.

“I am looking very forward to the debate,” Trump told reporters at the White House on Monday.

The debate is likely to focus in part on Trump's handling of the coronavirus pandemic, which has killed more than 200,000 Americans, and his push to fill a seat on the US supreme court. On Saturday, the president nominated Amy Coney Barrett, a conservative US federal appeals court judge, to replace liberal Justice Ruth Bader Ginsburg, who died on September 18.

Trump in 2016 broke a decades-old tradition of presidential nominees releasing their tax returns when seeking office and the re-emergence of his tax history as an election issue offers Biden another avenue of attack Tuesday evening.

Biden's campaign is trying to turn the tables on Trump, who ran successfully as an economic populist four years ago and who is regarded by some observers as having an edge over the challenger on the issue of who would best manage the economy.

In recent days, Biden has characterised the race as a clash between Scranton, the working class Pennsylvania city where he spent part of his childhood, and Park Avenue. Trump Tower, which serves as the headquarters for the Trump Organization, is located near that tony boulevard in Manhattan.

Trump has painted his economic record in glowing terms, saying his policies were responsible for boosting growth and reducing US unemployment to near 50-year lows before the outbreak of the pandemic.

His message, however, has been badly dented by the recession triggered by the virus, which has led to an economic cratering that has put millions of Americans out of work. Democrats say Trump has mishandled the pandemic and embraced policies that favoured corporations and the rich.

Biden is proposing to hike the corporate income tax and raise taxes on people making more than $400,000 if elected.

Trump, who signed a $1.5-trillion Republican-sponsored tax cut package in late 2017, accuses his opponent of pushing a far-left agenda that will destroy the US economy just as it emerges from the pandemic.

While nobody expects Russophobia to die down if Trump wins or loses, Biden would likely be bad news for Russia
World
6 months ago

Rand weakens as markets shift focus to US politics

Rand weakens as markets shift focus to US politics