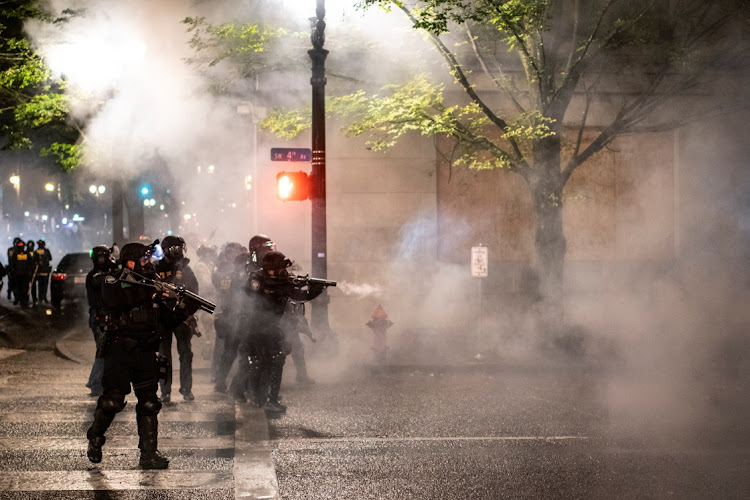 Louisville — US cities were on high alert on Thursday after two police officers were shot during demonstrations over a decision by a grand jury not to file homicide charges against police in the fatal shooting of a black woman, Breonna Taylor.

Protests erupted in the Kentucky city on Wednesday after the state attorney-general announced that a grand jury did not bring any charges for the six police bullets that struck Taylor, but instead lesser charges against one of the white policemen for stray shots that hit the neighbouring apartment.

Civil rights activists decried the outcome as a miscarriage of justice and part of a nationwide pattern of unwarranted police violence against minorities.

The demonstration started peacefully and emotionally on Wednesday night, with many protesters in tears after they had mourned Taylor for months, demanding the arrest of the officers involved.

Louisville turned violent after dark when the two officers were shot and wounded. Police arrested 127 people in Louisville, including Larynzo Johnson, 26, who was charged with two counts of assault in the first degree and 14 counts of wanton endangerment in connection with the wounding of the two officers.

“For all of us it is a very tense and emotional time,” he added.

The Louisville protest was the latest in a wave to grip the country after the killings of African Americans by police, including the May 25 death of George Floyd when a Minneapolis officer knelt on his neck.

Demonstrators led by the Black Lives Matter movement have demanded an end to racial injustice and excessive police force.

With people already casting ballots in early voting for the November 3 US presidential election, the demonstrations have drawn not only peaceful antiracism protests but also a volatile mix of armed, right-wing militias and anarchists.

In Buffalo, New York, a truck sped into a group of demonstrators, injuring one person, video on social media showed.

Louisville mayor Greg Fischer declared a state of emergency ahead of the grand jury announcement, ordering much of the centre of town barricaded and setting a 9pm curfew that remained in effect on Thursday.

Taylor's death on March 13 drew little national attention at first but was thrust into prominence after Floyd's death and with the help of celebrities such as Hollywood stars and basketball great LeBron James.

Demonstrations under the banner “Say her name” have been held in Louisville for months.

Taylor, 26, an emergency medical technician and aspiring nurse, was killed in front of her armed boyfriend after the three officers forced their way into her home with a search warrant in a drug-trafficking investigation.

Kentucky attorney-general Daniel Cameron said the panel declined to bring any charges against two of the three policemen who fired into Taylor's apartment because their actions were found to have been justified under Kentucky law as they returned fire after Taylor's boyfriend shot at them, wounding one.

Police fired a total of 32 shots after the one round from Taylor's boyfriend, Kenneth Walker, who said he fired a warning shot because he feared a criminal intrusion and did not hear police identify themselves.

It is likely to be the largest police misconduct payout in the US city’s history after Taylor, a black woman, was shot by officers in her apartment
World
10 months ago

Gunfire at Wisconsin protest over another US police shooting