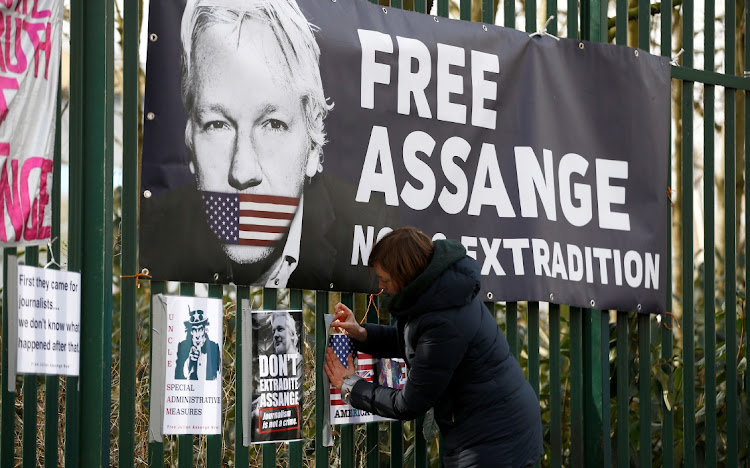 A supporter of WikiLeaks founder Julian Assange posts a sign outside a court ahead of a hearing to decide whether Assange should be extradited to the US, in London, the UK, February 25 2020. Picture: REUTERS/HENRY NICHOLLS

London  — A lawyer for Julian Assange has reiterated claims that the WikiLeaks founder was offered a presidential pardon if he revealed the source behind the leaked Democratic National Committee (DNC) e-mails.

Jen Robinson, who has represented Assange for years, said that then US Congressman Dana Rohrabacher and an associate of President Donald Trump met Assange in the Ecuadorean embassy on August 15 2017 to discuss the “win-win” idea.

The proposal “was that Mr Assange identify the source for the 2016 election publications in return for some kind of pardon, assurance or agreement which would both benefit President Trump politically and prevent US indictment and extradition”, Robinson said in a witness statement on Friday.

The alleged offer of a pardon is one of the key arguments Assange is using in a London courtroom to fight extradition to the US to face criminal charges. His lawyers argue that the US case is politically motivated.

The claims were first made earlier this year, as part of a pretrial hearing, when lawyers for Assange told the judge they would be submitting Robinson’s witness statement as evidence. Her testimony offered more details about the 2017 meeting.

In February, the White House denied a pardon had ever been offered to Assange and called the claims “a complete fabrication and a total lie”.

James Lewis, a lawyer for the US, told the court that “the position of the government is we don’t contest these things were said”.

Rohrabacher offered a more nuanced account of the meeting in a blog post earlier this year. “I told him that if he could provide me information and evidence about who actually gave him the DNC e-mails, I would then call on President Trump to pardon him,” Rohrabacher said. “At no time did I offer a deal made by the president, nor did I say I was representing the president.”

Rohrabacher said he later told then White House chief of staff John Kelly that Assange was willing to provide information about the hacked DNC e-mails in exchange for a pardon. No-one followed up with him, Rohrabacher said.

During the 2016 campaign, WikiLeaks published a series of DNC e-mails damaging to Democratic candidate Hillary Clinton that US intelligence believes were hacked by Russia as part of its effort to influence the election.

Robinson said Rohrabacher told Assange that Trump was aware of, and approved, the meeting taking place. Rohrabacher also told Assange he would meet Trump on his return to the US to discuss Assange’s reaction to the deal, she said.

Rohrabacher “wanted to resolve the ongoing speculation about Russian involvement” in the DNC leaks to WikiLeaks, Robinson said. He was accompanied by Charles Johnson, another Trump associate, she said.

“He said he regarded the ongoing speculation as damaging to US-Russian relations, that it was reviving old Cold War politics, and that it would be in the best interest of the US if the matter could be resolved,” she said, adding that Rohrabacher said revealing the source of the leaks “would be of interest, value and assistance to President Trump”.

Rohrabacher, who represented a district in California’s Orange County from 1988 until he was defeated by Democrat Harley Rouda in 2018, was known as Russian President Vladimir Putin’s strongest defender in Congress.

Assange is fighting extradition to the US to face charges about leaks that predate the DNC documents.

He is accused of conspiring to obtain and disclose classified documents passed to him by former US Army intelligence analyst Chelsea Manning. Those documents, including state department cables and reports on the military action in Iraq and Afghanistan, were published by WikiLeaks in 2010 and 2011.

Covid-19 pandemic brings trolls out of their holes

The Covid-19 pandemic is allowing a time for introspection, and for appreciating how interdependent our world is. Sadly, it’s also bringing the ...
Features
1 year ago

Assange’s lawyer says US ‘boldly’ misstates facts about his conduct

The US wants to extradite WikiLeaks founder Julian Assange for espionage, but his lawyer blames it on the media for leaking details
World
1 year ago