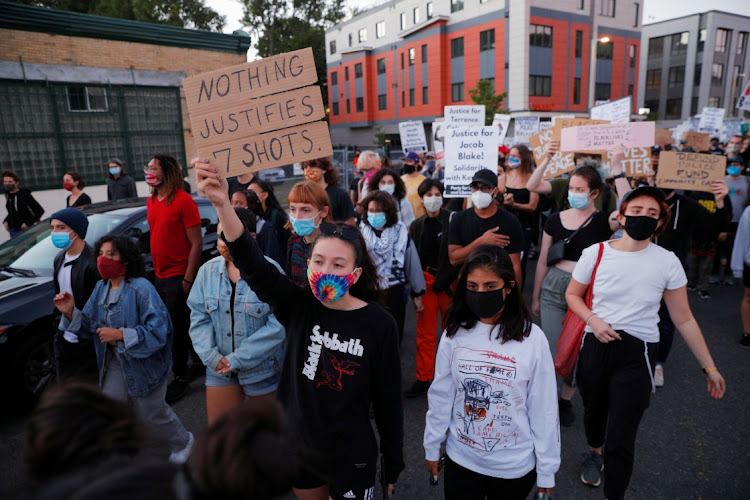 Demonstrators call for justice after Black man Jacob Blake was shot several times by police in Kenosha, Massachusetts, the US. Picture: REUTERS/BRIAN SNYDER

New York — Jacob Blake, the black man whose shooting by police set off protests and prompted visits to Kenosha, Wisconsin, by both presidential candidates, released a video from his hospital bed on Saturday night. Paralysed from the waist down, he described his physical pain and urged people to “change y’all lives out there”.

“Your life, and not only just your life, your legs — something that you need to move around and move forward in life — can be taken from you like this,” Blake said. “We can stick together, make some money, make everything easier for our people because there’s so much time that’s been wasted.”

#JacobBlake released this powerful video message from his hospital bed today, reminding everyone just how precious life is. #JusticeForJacobBlake pic.twitter.com/87CYlgPDBj

A police officer shot him multiple times in the back during an incident in Kenosha on August 23. Protests escalated into looting and riots and two days later a 17-year-old from Illinois, Kyle Rittenhouse, shot two protesters dead, the police allege.

Kenosha quickly emerged as one other point of protest since the police killing of George Floyd in Minneapolis on May 25. Protests continued on Saturday night in Portland, the site of often violent demonstrations and counterdemonstrations for three months. The police again declared a riot after protesters hurled Molotov cocktails.

Earlier on Saturday, just north of Portland, a memorial was held for the man fatally shot a week ago after a caravan of Trump supporters went through the city centre, AP reported. Hundreds gathered in a park in Vancouver, Washington, in memory of Aaron “Jay” Danielson, a supporter of a right-wing group Patriot Prayer, AP said. The suspect was shot and killed by police on Thursday.

New York attorney-general Letitia James said on Saturday her office will impanel a grand jury as part of its investigation into the death of Daniel Prude, a black man hooded by Rochester police and asphyxiated in custody earlier this year.

Eleven people were arrested on Friday on charges ranging from rioting to unlawful assembly during a third night of protests in the upstate New York area. A protest held on Saturday drew hundreds of demonstrators, according to an ABC 13 reporter.

More than 2,000 people gathered in New York on Friday, and police used pepper balls, spray and teargas to disperse the crowd, according to the Wall Street Journal.

Rochester erupted last week in protest after the release of police body-cam footage leading to Prude’s death. The day after mayor Lovely Warren suspended the officers involved in the death of Prude, the head of the police union said the officers had followed training.

Multiple demonstrations also emerged in Louisville, where two groups of armed activists faced off on Saturday, sending protesters running for cover before the Kentucky Derby was set to start, the Associated Press reported.

The groups, one in support of police and the other for racial justice, met near a city square where demonstrations were taking place for Breonna Taylor, an unarmed 26-year-old black woman who was fatally shot at home by police in March. One group shouted, “U-S-A!” and “Back the blue!” while the other yelled “Say her name!” with chants calling out Taylor’s name, AP said.

Protests also continued in the nation’s capital on Saturday for Deon Kay, a young black man fatally shot by the city’s police earlier this week, the Washington Post reported. A total of 32 black federal prosecutors in the city signed a 10-page memo to acting US attorney Michael Sherwin detailing changes which they say will help ensure that prosecutors make the fairest decisions in the face of biases.

In Florida a grand jury declined to issue indictments against Tallahassee police officers involved in the fatal shooting of three people in separate incidents, AP reported. All three victims were black. A diverse group of demonstrators took to the streets on Saturday, declaring solidarity with the city’s black community, which makes up about one in three of the 200,000 residents.

President is forcing his opponent to spend resources in Minnesota, traditionally a Democratic state
World
10 months ago

Activists have flagged the US president’s remarks, saying voting twice is illegal
World
10 months ago