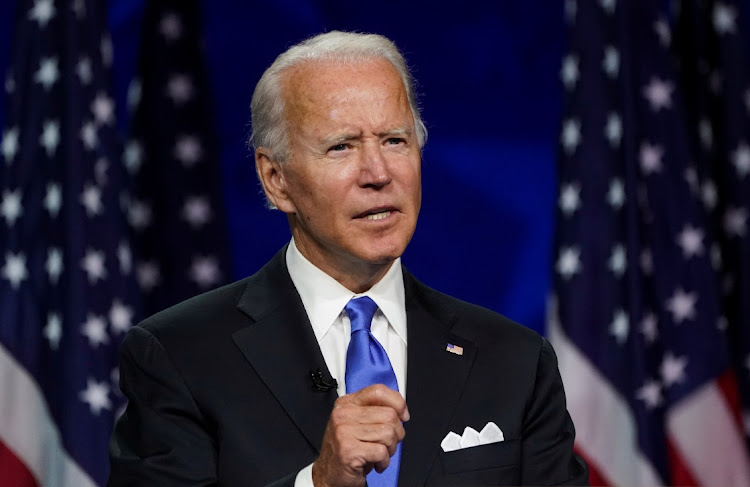 Joe Biden accepts the 2020 Democratic presidential nomination at the Chase Center in Wilmington, Delaware, the US, August 20 2020. Picture: REUTERS/KEVIN LAMARQUE

New York — Democratic presidential nominee Joe Biden has not been tested for coronavirus, a top aide said on Sunday, days after Biden vowed he would shut the US down if necessary to bring the virus under control.

“He has not been tested,” Kate Bedingfield, deputy manager for Biden’s presidential campaign, said on ABC’s This Week. “We have put the strictest protocols in place, and should he need to be tested, he certainly would be.”

She also said Biden has not had the virus, though it was not clear how this would be known without a test.

President Donald Trump's team said earlier in 2020 he was being tested daily, and later that it was actually every few days, while his press secretary has said he was being  tested multiple times a day. Several members of Trump’s administration and staff have tested positive for Covid-19.

Biden is leading in polls after the Democratic convention as the former vice-president and running mate Kamala Harris prepare to hit the busiest and most public part of the campaign trail before the November election.

Both Biden and Trump, at 77 and 74 respectively, are at ages where complications from contracting the coronavirus could be more severe.

On Friday, Biden said he would listen to government scientists on the coronavirus and shut the US down if necessary to bring virus under control.

“I would be prepared to do whatever it takes to save lives, because we cannot get the country moving until we control the virus. That is the fundamental flaw of this administration’s thinking to begin with,” the former vice-president said. “I would shut it down. I would listen to the scientists.”

Trump has repeatedly urged state and local governments to ease Covid-related restrictions on schools and businesses to boost the economy.

In an interview to be broadcast Sunday, Biden also denied Trump’s charge that he would defund police departments, as some Black Lives Matter activists have proposed in the wake of police killings of Black citizens.

“First of all, there has to be national standards that in fact apply to every police department in the country,” Biden said. “I don’t want to defund police departments. I think they need more help. They need more assistance. We have to make it clear that this is about protecting neighbourhoods. Protecting people, everybody, across the board.”

His running mate, senator Kamala Harris,  brushed off insults from Trump, who has called her “nasty,” a “madwoman” and the “meanest” US senator for her treatment of Trump supreme court nominee Brett Kavanaugh during his confirmation hearings.

One US presidential candidate believes in facts. One does not.
Opinion
11 months ago

The former president, with his usual, measured cadence, confirmed that ‘Donald Trump hasn’t grown into the job because he can’t’
World
11 months ago
Next Article

CHARMAIN NAIDOO: Birtherism is back; may ‘blindian’ Kamala Devi Harris kick its ...

CHARMAIN NAIDOO: Birtherism is back; may ‘blindian’ Kamala Devi Harris kick its ...