US postmaster general suspends changes until after election 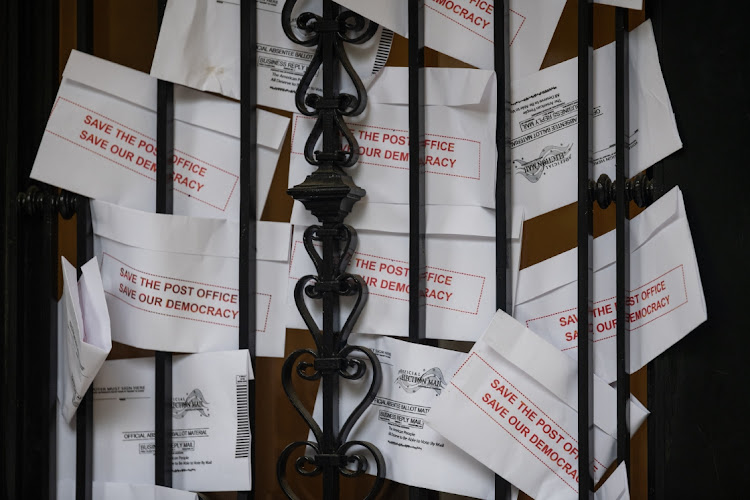 Envelopes are placed in a protest outside the home of US postmaster general Louis DeJoy in Washington, DC, the US, Augustu 15 2020. Picture: ERIC LEE/BLOOMBERG

Washington — US Postmaster general Louis DeJoy said he is suspending changes to mail service that raised concerns over slow delivery of ballots in the fall election after Democrats accused President Donald Trump of hampering the mail-in process.

“To avoid even the appearance of any affect on election mail, I am suspending these initiatives until after the election is concluded,” DeJoy said in an e-mailed statement Tuesday.

DeJoy said that mail processing equipment and blue collection boxes will remain where they are, and no mail processing facilities will be closed. Overtime work will “continue to be” approved as needed, he said.

The announcement follows concerns from Democrats and others over apparent mail slowdowns as the coronavirus pandemic leads to the necessity for increased mail-in voting options. DeJoy is to appear twice before Congress in coming days: on Friday at the Senate homeland security and governmental affairs committee, and on Monday before the House committee on oversight and reform.

The White House did not  immediately response to a request for comment.

Speaker Nancy Pelosi is calling the House back on Saturday to vote on legislation to halt post office cutbacks and give the agency $25bn in additional funding.

“The post office in these times of coronavirus is really election central,” Pelosi said during an event with Politico Tuesday. “Well, he should,” she said, when suddenly handed a note about a news report on DeJoy’s announcement that he is suspending changes.

Meanwhile, the attorneys-general for Washington and Pennsylvania were briefing reporters on Tuesday on plans for separate, multistate lawsuits that would seek to halt operational changes at the Postal Service. More than a dozen other states had signed onto the effort, including California, Wisconsin, Massachusetts, Minnesota and Nevada.

“By interfering with the Postal Service, President Trump is putting both our democracy and people’s health at risk,” Massachusetts attorney-general Maura Healey said in a statement on Tuesday. “We are suing to ensure the integrity of our electoral process and to make sure each and every vote is counted during this election.”

Maryland attorney-general Brian Frosh said DeJoy’s commitment to hold back on operational changes is insufficient and not specific enough to avoid the lawsuit he plans to file with other attorneys-general.

“They say they’re going to get back on course for November,” Frosh, a Democrat, said in a phone call. “But that’s a promise that I don’t think we can take at face value, especially when you look at the president’s statements about not letting the USPS have the money it needs and that if you have a mail-in election, you’ll never elect another Republican.”

Recent media reports have pointed to the removal of mail sorting machines in various cities, as well as the taking of mailboxes off the streets. Post office operating hours have been reduced and overtime work cut. The agency’s inspector-general is investigating those moves.

DeJoy said Tuesday “some long-standing operational initiatives” that predate his arrival “that have been raised as areas of concern as the nation prepares to hold an election in the midst of a devastating pandemic”.

“Even with the challenges of keeping our employees and customers safe and healthy as they operate amid a pandemic, we will deliver the nation’s election mail on time and within our well-established service standards,” he said in the statement. “The American public should know that this is our number one priority between now and election day.”

Republicans in the Senate do the bidding of the president in irrationally blocking $3.6bn needed to improve the system
Opinion
11 months ago
Next Article

Has the pandemic changed US political conventions forever?

Has the pandemic changed US political conventions forever?