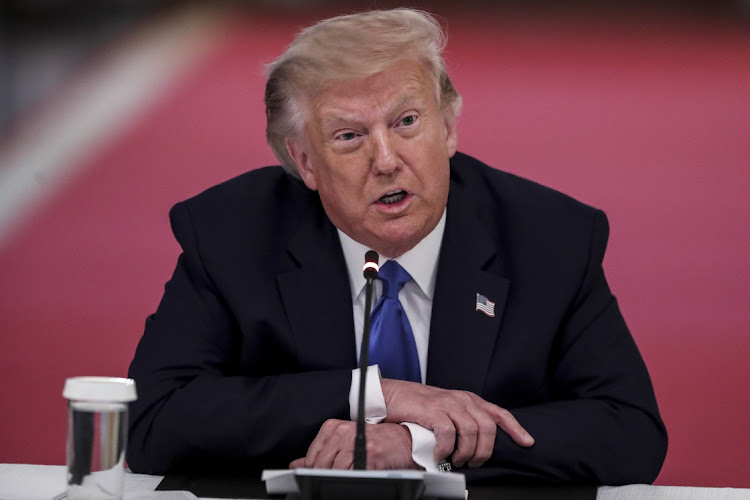 US President Donald Trump speaks during a law enforcement meeting in the East Room of the White House in Washington, DC, the US, July 13 2020. Picture: OLIVER CONTRERAS/BLOOMBERG

Washington — Almost 60 US universities filed a court brief in support of Harvard University and the Massachusetts Institute of Technology in a case the schools brought to stop new visa rules that could bar many international students.

Stanford University and Ivy League schools including Yale and Princeton were among those that filed a so-called amicus brief on Sunday. They argued that the new rules, which require in-person teaching for a student visa, are “causing significant harm and turmoil”. Students now on visas can have remote teaching for the duration of the Covid-19 pandemic, they said.

US higher education, already facing long-term challenges because of changing demographics, has been severely hit by the crisis, closing campuses and giving refunds earlier in 2020. As schools try to prepare for coming classes, more are saying they will be fully online for the foreseeable future — a plan that now could jeopardise many of the 213,000 international students that enrol every year via the visa programme.

“This new directive forces international students to choose between pursuing their academic dreams or risking deportation, all the while throwing months of careful planning by colleges and universities into disarray,” Ishan Bhabha, a partner at law firm Jenner & Block, which is representing the colleges, said in a statement.

The brief cites students affected by the guidance. They include a Rice University student working on Covid-19 research and developing low-cost ventilators who would be forced out of the country.

Harvard and MIT sued US immigration and customs enforcement (ICE) last week after the agency issued the rules, which would block visas for applicants studying at colleges that only offer virtual instruction. Students on existing visas who want to remain in the US must transfer to a school with in-person instruction or attend one that offers both remote and on-campus learning.

The Trump administration’s decision to rescind a coronavirus exemption to ICE’s in-person class requirements was “arbitrary and capricious”, Harvard and MIT said. It also violates the Administrative Procedure Act by failing to allow public comment and consider harm to students, they said.

Jenner & Block was among several law firms that persuaded the supreme court to protect young undocumented immigrants, known as Dreamers, from deportation.

On Friday, the schools filed a request for a preliminary injunction. A hearing is scheduled for July 15.

Knee-jerk responses are often flawed; international learners contributed nearly $45bn to the US economy in 2018
Opinion
9 months ago

US colleges and universities have work cut out when students return

Trump extends and expands visa restrictions to end of year

The US issued more than 900,000 visas in 2019 in the categories Trump plans to freeze
World
9 months ago
Next Article

US coronavirus task force member has a go at Anthony Fauci

US coronavirus task force member has a go at Anthony Fauci