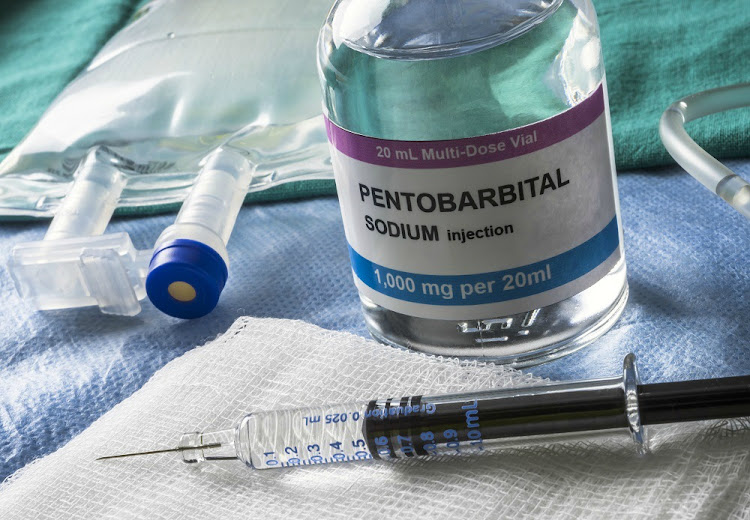 Pentobarbital is used to euthanise animals, but can also be used in the execution of human beings. Picture: 123RF/digicomphoto

If the Trump administration carries out the first federal execution since 2003 on Monday, as scheduled, it will mark the culmination of a three-year campaign to line up a secret supply chain to make and test lethal-injection drugs, a Reuters investigation has found.

Intent on enforcing the death penalty, President Donald Trump’s department of justice had started building the network of contractors it would need by May 2017, federal procurement records show. Since then, it has pursued a new drug protocol that could survive legal challenges through firms whose identities it has fought to keep hidden. Without the secrecy, the government has argued in court filings, its ability to procure the drugs would be “severely impaired” because the companies are not willing to supply or test execution drugs if they are publicly identified.

In some cases, even the companies involved in testing the deadly pentobarbital said they did not know its intended purpose. Among them is DynaLabs in downtown St Louis, a laboratory that years ago decided against doing quality tests on execution drugs because of the controversy surrounding capital punishment.

So co-founder Michael Pruett was surprised to learn from a Reuters reporter that his firm had been testing drugs that the justice department planned to use in lethal injections of condemned prisoners. The vials containing 50ml of pentobarbital, a powerful barbiturate, began arriving at his firm for testing on April 9 2019, according to laboratory records included in justice department filings.

The samples came not from the government, but rather a regular DynaLabs customer, a so-called compounding pharmacy that mixes custom-ordered drugs. Because pentobarbital has other uses, such as euthanizing animals or treating seizures, Pruett said he had little reason to suspect they might be used to kill condemned prisoners.

“We decided seven or eight years ago we were not going to test for compounds that were being used for putting anyone to death,” Pruett said in an interview.

Reuters identified DynaLabs, along with two other laboratories that were involved in testing, through redacted laboratory reports that the justice department produced in response to lawsuits filed by death-row inmates. In legal filings, the department had cited the testing firms’ results as evidence of the drugs’ safety. It blacked out the companies’ names, logos and other identifying information.

All three firms confirmed that they had produced the test results cited by the justice department in court filings. One of the firms, ARL Bio Pharma in Oklahoma City, said in a statement to Reuters that it was “not aware of the intended use” of the drugs. The third firm, Eagle Analytical Services in Houston, declined to comment on whether it knew at the time that it was testing lethal-injection drugs for the government.

All three firms told Reuters the justice department did not hire them directly, saying they were contracted by a compounding pharmacy, which they declined to identify. The justice department has confirmed in court filings that it has hired one such pharmacy to make the execution drugs. Department spokesperson Wyn Hornbuckle declined to name any of the companies in its supply chain or to answer detailed questions from Reuters about its efforts to secure lethal drugs.

Lawyers for death-row prisoners and death-penalty opponents argue that such secrecy prevents the public and condemned inmates from evaluating whether executions will adhere to the country’s strict drug-control laws and a constitutional ban on “cruel and unusual” punishments. Paul Enzinna, one of the lead attorneys representing the death-row inmates challenging the federal execution protocol, declined to comment for this story.

The difficulty in procuring execution drugs has forced states and the US government to get their supplies of the drug from compounding pharmacies, which operate differently from large pharmaceutical companies — and with less oversight. Such pharmacies typically mix tailored versions of drugs suited to individual patients, for example by turning a pill into a liquid form for a patient who has trouble swallowing. Their products have short shelf-lives and do not require Food and Drug Administration (FDA) approval, making them more prone to problems with potency or contamination that could lead to a needlessly painful death, health experts say.

Introduced in the 1970s, lethal injections have since replaced the electric chair as the primary method of US executions, in part because states argued injection was a more humane method. But the drugs can inflict pain. Pentobarbital can rapidly damage capillaries in the lungs and force blood frothing into the airways, leading to a drowning sensation in a condemned inmate who has not yet lost consciousness, autopsies of executed inmates show. A degraded or substandard drug can cause suffering by delaying the moment of unconsciousness, lawyers for condemned inmates have argued in court filings.

The justice department has scheduled the executions of two men convicted of murdering children for next week, starting on Monday, and a third in August. The Supreme Court cleared the way for the executions on June 29, when it declined to rule on a legal challenge brought by death row inmates. Their lawyers argued that the government’s move to create its own lethal-injection protocol violated a law requiring federal executions to follow the procedures of the state where an inmate was sentenced.

The department first announced in July 2019 that it would resume executions. But its work in lining up a lethal drug supply had started more than two years earlier, a timeline that has not been previously reported. In May 2017, the department — anticipating legal challenges — hired an Arizona litigation consulting firm, Elite Medical Experts, according to contracting records in the government’s procurement database.

Elite lined up physicians and scientists who could assess whether pentobarbital was a humane method of execution that could replace the three-drug lethal injection protocol used in the last federal execution in 2003, the documents showed. The new drug protocol was needed because supplies of an anaesthetic in the three-drug cocktail, sodium thiopental, had dried up when the last remaining US manufacturer, Hospira, stopped making it in 2011. The company said at the time that it could not comply with a requirement from the government of Italy, where its factory was located, that it ensure the drug is not used for US executions.

Elite’s founder, Burton Bentley, said in an interview that his firm only provided the department with expert witnesses and that he had no knowledge of what companies would supply the lethal drug.

The refusal by pharmaceutical companies to sell execution drugs to US prison systems has choked legal supply channels for Texas, Missouri and the more than two dozen other states that still enforce the death penalty. Over the past decade, some states have resorted to promising anonymity to their lethal-drug suppliers, with at least 13 passing new laws to keep the companies’ identities secret. Other states say they have abandoned efforts to procure a reliable source of lethal-injection drugs because of the increasing difficulty, leaving their condemned inmates in limbo.

Many pharmaceutical firms avoid any involvement in supplying drugs for executions, reasoning that their medicines are intended to promote health rather than kill people. The industry has come under pressure by anti-capital punishment groups and had to comply with a 2011 EU ban on execution drugs. It has since become standard for pharmaceutical firms to refuse to sell drugs for US executions. The American Pharmacists Association, representing about 60,000 practising pharmacists and other medical groups, tell members that aiding executions is unethical.

Only four drug companies have US FDA approval to make a pentobarbital drug for human use: Akorn, which sells it under the trade name Nembutal, and three generic manufacturers: Sagent Pharmaceuticals, Custopharm, and Renaissance Pharma. But all four makers have anti-capital punishment policies and refuse to sell the drug to US prisons and the justice department.

DynaLabs wanted to avoid any protests from capital punishment opponents. It had decided its policy years before, and had previously turned down a compounding pharmacy in Missouri that asked DynaLabs to test execution drugs.

“It’s not that we don’t agree with the death penalty,” Pruett said. “It wasn't worth the controversy — the picket line out front that would eventually take place. That was our decision, and as far as I know, we stood by it.”

Justice department court filings show that its compounding pharmacy sent at least 21 pentobarbital samples to DynaLabs for potency and stability testing in 2019. The work included a year-long study of the drug’s shelf-life that was due to run through May.

After learning from Reuters that he was testing execution drugs, Pruett declined to comment — citing the advice of his attorney — on whether he would continue to run the commissioned tests on the pentobarbital samples.

Most capital crimes in America are prosecuted by states. The federal government has only executed three people since 1963, all between 2001 and 2003. Currently, 62 people are on death row for federal crimes.

Eric Holder — attorney-general in the administration of Trump’s Democratic predecessor, Barack Obama — expressed discomfort with capital punishment as he waited for state-level legal challenges to play out. “I think there are fundamental questions we need to ask about the death penalty,” Holder said in remarks to the National Press Club in 2015.

The justice department’s stance changed under the Trump administration, but it needed to solve the drug-supply issues and set its sights on pentobarbital. Fourteen states now use pentobarbital in executions, either by itself or in combination with other drugs, according to the Death Penalty Information Center, a Washington-based non-profit research organisation.

The bulk manufacturer’s first attempt to pass quality tests failed, department filings show. When ARL Bio Pharma tested that initial sample of the pentobarbital powder on October 20, it found it was contaminated with unknown impurities, according to results filed in court by the justice department. But the manufacturer “refined” its production processes and a subsequent batch of the pentobarbital powder passed purity tests in February 2019, according to an affidavit filed by an official with the Bureau of Prisons.

In executions involving compounded pentobarbital in Texas, seven out of the 22 inmates killed in 2018 and 2019 complained of a burning sensation in their veins after the drug was injected, according to accounts by the Associated Press, which attends all executions in the state.

Such cases make it important that lethal-injection drugs are secured through a transparent process, said Robert Dunham, director of the Death Penalty Information Center. “It’s important that the public be able to examine the history of the contractors,” he said. “Have they been involved in improper conduct in the past? How does their safety record look?”

But the identity of such contractors remains a closely guarded secret — even to some of the contractors themselves. DynaLabs’ Pruett was not pleased to learn of his company’s involvement in testing lethal-injection drugs without his knowledge. He initially thought it was a mistake, but confirmed through his own records that his company had completed the tests cited in court by the justice department.

In a second interview, he said it seemed reassuring that the government had ordered extensive testing of the drugs. “I’d rather know, if someone I knew was being put to death with lethal injection, that the injection was tested by a qualified laboratory,” he said.

Ascendis: It all depends on asset sales and restructuring

The key, in the short term, is for Ascendis to gain an ‘amend and extend’ agreement from the banks that hold the debt
Companies
10 months ago
Next Article