Biden takes 14-point lead over Trump in US poll 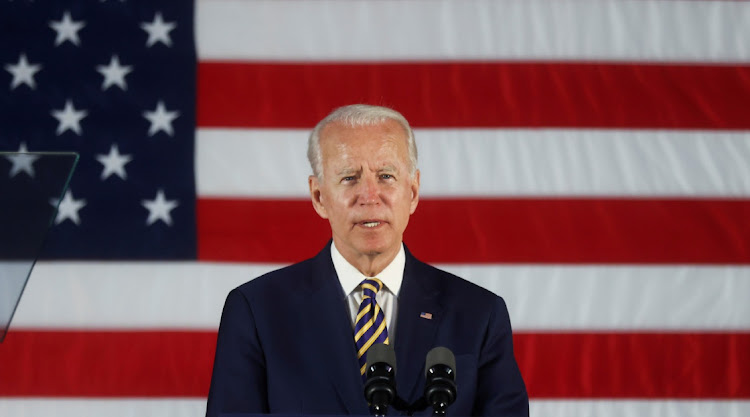 Washington — Presumptive Democratic nominee Joe Biden leads President Donald Trump 50% to 36% in a new US nationwide poll on Wednesday, the latest alarm bell for the president’s campaign as the economy, coronavirus and Black Lives Matter protests continue to weigh on his re-election bid.

The 14-point difference in the New York Times/Siena College poll matches the largest margin Biden has seen in 2020, and it shows Biden leading or making inroads among a broad cross-section of demographic groups.

Amid a campaign schedule curtailed by the coronavirus pandemic, the former vice-president is ahead by 22 points among women, but also 3 points among men. He is ahead or effectively tied in every age and ethnic group, and he leads by 21 points among independent voters.

Trump’s only dependable lead comes from registered Republicans and from the one demographic group that gave him an advantage in industrial battleground states in 2016: white, non-college educated voters. He leads Biden among that cohort by 19 points.

Biden’s national polling lead at this point in the campaign cycle is larger than any enjoyed by Hillary Clinton in the last six months of the 2016 campaign. And Biden is leading in every public poll in June in key battleground states such as Arizona, Florida, Michigan, Pennsylvania and Wisconsin — all states that Trump won in 2016, giving him an Electoral College victory despite losing the popular vote.

But national polls don’t always predict the outcome. Trump won some of those states by a fraction of a percentage point — allowing him to pull off an upset victory despite trailing in national polls in the days before the election. If he outperforms Biden in those key states again, that could tilt the balance.

Trump’s 50% approval rating on economic issues continues to be a bright spot. Only 39% approve of his handling of criminal justice, 38% on the coronavirus, 33% on race relations and 29% on the nationwide protests after the police killing of George Floyd in Minneapolis in May.

Trump has responded to the protests by ordering federal troops to guard the White House and celebrating the “great American heritage” of statues and military bases commemorating Confederate generals. His attempt to reboot his campaign with a rally in Tulsa, Oklahoma was met with sparse crowds and controversy when he said he ordered officials to slow coronavirus testing because it was showing increased infection numbers.

Biden, meanwhile, has been largely confined to the immediate vicinity of his Delaware home, conducting fundraisers and campaign events online. He has held a few small campaign events in Delaware and nearby Philadelphia. A Tuesday fundraiser with former president Barack Obama raised $11m.

Biden’s 14-point advantage is the same lead registered in a CNN poll earlier in June that caused an angry Trump campaign to demand the cable channel retract its findings. The Times sample contained 26% Republicans, which is consistent with the findings of similar telephone polls; the Trump campaign says pollsters should assume the same 33% representation found in 2016 exit polls.

The addition of the New York Times poll pushed Biden’s lead in the FiveThirtyEight average of polls to over 10 percentage points for the first time.

The telephone survey of 1,337 registered voters was conducted from June 17 to 22 and has a margin of error of plus-or-minus 3 percentage points.

Ahead of the November election, the US’s allies and rivals have to choose between waiting to see if Biden wins or cutting deals now with Trump
World
11 months ago