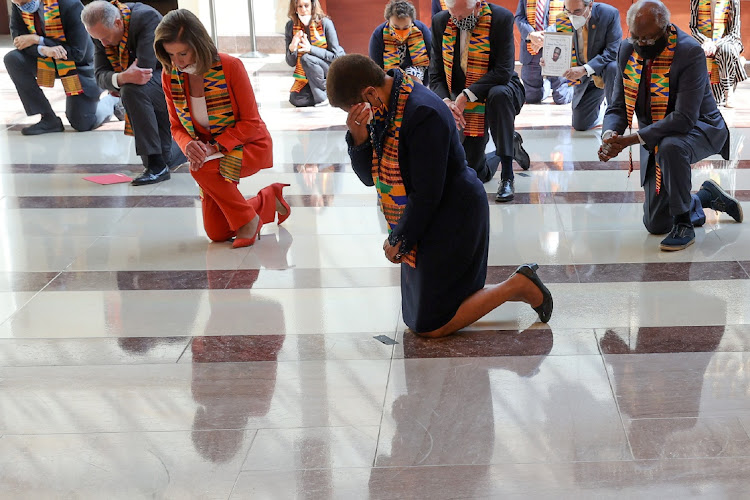 Washington — Democrats proposed a sweeping police reform bill on Monday, hoping to turn energy from growing nationwide protests over racial injustice and police misconduct into concrete legal changes that could make it easier to prosecute and sue law enforcement officers.

House speaker Nancy Pelosi, Senate minority leader Chuck Schumer and other top Democrats, before presenting the legislation at a news conference, knelt for 8 minutes and 46 seconds of silence to honour George Floyd, whose death at the hands of Minneapolis police has sparked weeks of protest.

“The martyrdom of George Floyd gave American experience a moment of national anguish as we grieve for African Americans killed by police brutality,” Pelosi said. Now it is “being transformed into a moment of national action”, she said, adding, “We cannot settle for anything less than transformative structural change.”

Senator Cory Booker welcomed the protests building in cities and towns around the country, but stressed that concrete action was necessary.

“Empathy and sympathy and words of caring for those who have died and suffered is necessary but not enough,” Booker said. “We must change laws and systems of accountability.”

Bill co-sponsor senator Kamala Harris, a potential choice to be Democratic presidential candidate Joe Biden’s vice-presidential pick, said, “We are here because black Americans want to stop being killed.” Even so, she said, “reforming policing is in the best interest of all Americans”.

The Justice in Policing Act would change the definition of criminal misconduct for police, so instead of “wilfully” violating constitutional rights, an officer could be charged after doing so with knowing or reckless disregard. It would also curtail “qualified immunity” that broadly shields police officers from being held liable for civil damages for rights violations in civil lawsuits.

The bill faces an unclear path through the Republican Senate or the White House. Senate majority leader Mitch McConnell hasn’t ruled out Republican backing for some type of police reform legislation, though the GOP has resisted some proposals in the past.

“It’s something we need to take a look at,” McConnell said last week. “There may be a role for Congress to play in this as well. We’ll be talking to our colleagues about what, if anything, is appropriate to do.”

Attorney-general Bill Barr said Sunday on CBS’s “Face the Nation” he opposes efforts to make it easier to sue police, arguing it would result in “police pulling back.”

President Donald Trump has seized on calls by some protesters to cut funding for police to attack Democratic presidential candidate Joe Biden. The president held a roundtable discussion with law enforcement representatives on Monday.

Congressional Democrats are so far not embracing calls to “defund” or “abolish” the police. Instead they are looking to create incentives for improvement by tying existing funding to changes.

“I can’t imagine that happening at the federal level,” said congressional black caucus chair Karen Bass when asked about defunding the police. There is a need to provide more social spending in distressed communities, and cuts to the defence budget could be a way to fund that, she said. Her bill does not have any new funds for police.

“We want to work with our police departments. There are many that take pride in their work,” Pelosi said when asked about cutting funding.

The speaker is separately pushing for nearly $1-trillion in state and local aid to make up for lost revenue during the Covid-19 pandemic and has argued that failure to enact the funding would lead to layoffs of local employees.

The bill would place new limits on federal funding for local and state police by requiring bias training and the use of de-escalation tactics for grants to be approved. It would curtail the transfer of military weaponry to state and local police, and give subpoena power to the justice department’s civil rights division to investigate abuses at the state and local level.

Lynching would be made a federal crime for the first time. The measure would require federal officers to wear body cameras, and it would create a national registry of police violations.

Bass and judiciary committee chair Jerrold Nadler of New York are sponsoring the bill in the House. Harris and Booker are the leaders of the effort in the Senate.

AYABONGA CAWE: Boot on the neck of blacks is a constant — everywhere

Trump, a far remove from Kennedy, fans the flames of US unrest

The civil uprising after the killing of George Floyd has been centuries in the making, but perhaps Trump’s divisive militance will be US racism’s ...
Opinion
10 months ago

Ignoring warnings about Covid-19 infection, rallies from Germany to Australia have been sparked by the killing of George Floyd in the US
World
10 months ago
Next Article

Policing in the US: ‘If coronavirus doesn’t kill us, the cops will’

Policing in the US: ‘If coronavirus doesn’t kill us, the cops will’