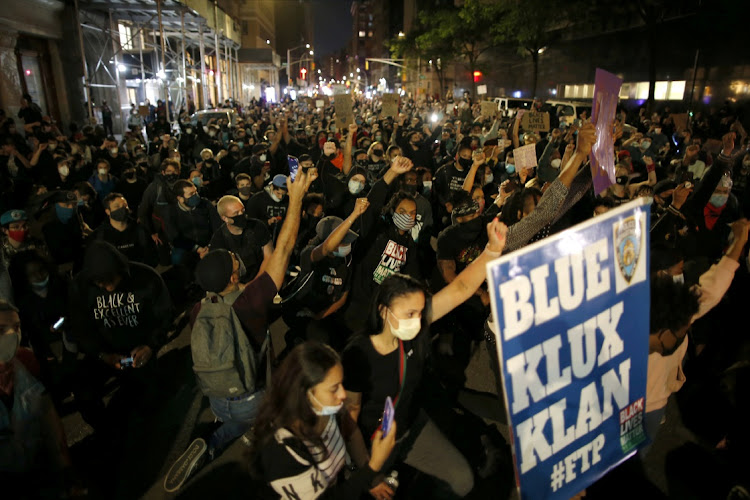 People take part in a protest against the death of George Floyd, in Manhattan, New York, the US, May 31 2020. Picture: REUTERS/EDUARDO MUNOZ

Washington — America’s reopening was always going to be fraught, with competing fears of new virus outbreaks and economic meltdown. Now cities from New York to Chicago to Los Angeles are reeling from unrest that could worsen both.

Violence erupted in dozens of places after the death of George Floyd, a black Minneapolis man who died after a white police officer pressed a knee into his neck for more than eight minutes. Demonstrators rampaged through shopping districts including Rodeo Drive in Beverly Hills, California, and Chicago’s Michigan Avenue, and set fire to police cars and municipal buildings.

In a teleconference with governors and law enforcement on Monday, President Donald Trump urged states to crack down. “You have to dominate,” Trump told them. “If you don’t dominate, you’re wasting your time. They’re going to run over you, you’re going to look like a bunch of jerks.”

The chaos, amid otherwise peaceful protests, struck as the economy struggles to emerge from coronavirus-enforced lockdown during which more than 104,000 Americans died.

“People are coming to the realisation that their jobs may not be coming back or coming back quickly. This is all conflating with the racial tensions and completely boiling over,” said Mark Zandi, chief economist at Moody’s Analytics. “This highlights the depth of despair in America,” he added, citing 20% unemployment and 50-million workers who’ve lost jobs or had pay cuts.

The protests may delay any rebirth. Mayor Lori Lightfoot said on Monday that Chicago hasn’t decided whether to push back its scheduled June 3 reopening. Public health commissioner Allison Arwady said the protests may mean Chicago will “take a step backwards” in curbing the outbreak.

The city’s police arrested 699 people on Sunday, mostly for looting, said superintendent David Brown. The mayor said attacks on storefronts, and in particular black-owned businesses, were “nothing short of devastating”.

Minnesota governor Tim Walz, who said Floyd’s funeral will be on Thursday, extended the curfew for Minneapolis and St Paul to 10pm to 4am. While Walz said the protests offered an opportunity for conversations about social justice, he also warned they could spread Covid-19.

“We’re still in the middle of a pandemic,” Walz said at a news briefing. “Those of you who were out there peacefully protesting, if you’re starting to get symptoms of Covid-19, please isolate. We will have to do some contact tracing, which I have not wrapped my mind about what that would look like in this size. But we want to massively test you.”

Violence prompted Amazon.com to scale back deliveries and shut down stations in cities including Chicago, Los Angeles and Portland. Target, which had already shuttered 32 stores about its Minneapolis headquarters, said it was closing dozens more about the nation.

Wireless carrier T-Mobile US, closed hundreds of its Metro and Sprint stores and Verizon Communications, will shut some of its more than 1,000 US locations. On a companywide webcast Monday, CEO Hans Vestberg pledged $10m to seven charities including the NAACP that work on causes like racial inequality and social injustice.

“The events unfolding across the country that are rooted in hate are contradictory with our beliefs,” Vestberg said in the video.

The scenes of burning cars, looting, and violent arrests by baton-wielding police could reverse gains business owners’ gains in luring back customers already concerned about going out in public.

After spiking in mid-March, the Federal Reserve Bank of Dallas’ new Social Distancing Index, which measures physical distancing and its relationship to economic activity, had started to decline once US states began lifting restrictions.

Cities with budgets hammered the pandemic can hardly afford the extra costs of police overtime, security measures and damage from the protests. Even before the demonstrations, the Fed and Trump administration had been under pressure to do more for states and municipalities.

Washington DC mayor Muriel Bowser said she was concerned the protests could spark another increase in coronavirus cases. “We saw a mass gathering, basically — we’ve been working hard for the last eight, 10 weeks on not having any mass gatherings,” Bowser said.

De Blasio said the violence wouldn’t delay the plan to restart construction, manufacturing, wholesale and curbside retail businesses. But the costs of policing the city during days of protests must be added to a budget already under stress.

The fury over Floyd’s death comes as blacks deal with a disproportionately heavy impact on their health and finances from the virus. In New York City, African-Americans have a higher rate of infection than other races, according to city data. A McKinsey report found that 39% of jobs held by black Americans are at risk from furloughs or layoffs due to the shutdowns.

Del Shea Perry, whose son died in a Minnesota jail in 2018 after getting what she said was inadequate medical care, said a protest in St  Paul on Sunday that she doesn’t condone looting, but it reflects fury over the deaths of black men. “Why must we fight like this to get justice?”

People have stepped in to aid businesses affected by the protests in Minneapolis. More than $800,000 was raised on GoFundMe to rebuild Scores Sports Bar, which delayed its opening during the pandemic only to be destroyed in the protests.