‘Nothing can stop America when you get right down to it,’ says billionaire investor 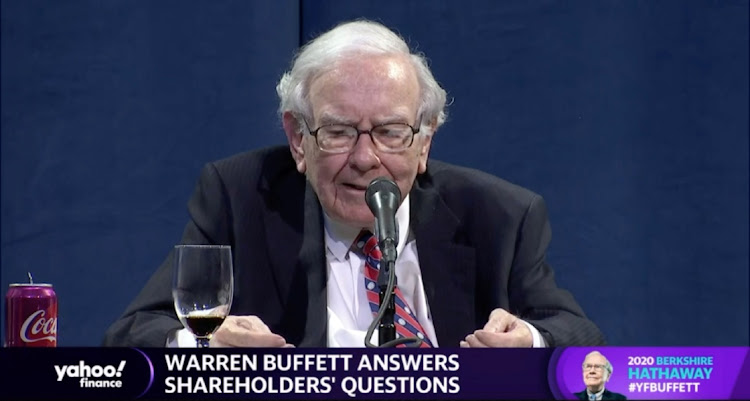 Warren Buffett addresses shareholders at the annual meeting of his Berkshire Hathaway Inc, which is being virtually broadcast due to the coronavirus disease (Covid-19) pandemic, in Omaha, Nebraska on May 2, 2020, in this still image taken from video. Picture: YAHOO! FINANCE VIA REUTERS

Billionaire investor Warren Buffett on Saturday said the US’s capacity to withstand crises provides a silver lining as it combats the coronavirus, even as he acknowledged that the global pandemic could significantly damage the economy and his investments.

Over more than four-and-a-half hours at the annual meeting of Berkshire Hathaway, Buffett said his conglomerate has taken many steps responding to the pandemic, including providing cash to struggling operating units, and throwing in the total on a multibillion-dollar bet on US airlines.

Buffett also said he remains keen on making a big acquisition, which he has not done since 2016, but has not provided financial support to companies as he did during the 2008 financial crisis because he saw nothing attractive enough, even after the recent bear market.

The 89-year-old opened the meeting in Omaha, Nebraska with remarks to soothe anxious investors, urging them to stay committed to stocks despite this year's bear market, even if the pandemic gets a second wind late this year.

Illustrating his remarks with dozens of plain black-and-white slides, Buffett called dealing with the pandemic “quite an experiment” that had an “extraordinarily wide” range of possible economic outcomes.

But he said Americans have persevered and prospered through such crises as the Civil War in the 1860s, the influenza pandemic a century ago and the Great Depression. American “magic” prevailed before and would do again, he said.

“Nothing can stop America when you get right down to it,” Buffett said. “I will bet on America the rest of my life.”

The meeting was held virtually for the first time because of the pandemic, without shareholders in attendance, and streamed by Yahoo Finance.

Abel has day-to-day oversight of Berkshire’s noninsurance businesses, and is considered by many analysts and investors a top candidate to eventually succeed Buffett as chief executive.

While quarterly operating profit rose 6%, several larger businesses including the BNSF railroad posted declines, hurt by the negative impact of Covid-19, the illness caused by the novel coronavirus.

Buffett said operating earnings will, through at least this year, be “considerably less” than they would have been had the pandemic not occurred.

Berkshire’s cash stake ended the quarter at a record $137.3bn, though Buffett said “we're willing to do something very big,” perhaps a $30bn to $50bn transaction.

Some nuggets for the lockdown, from the Noah principle to fancy valuations
Opinion
1 year ago

But it won't be in US airlines, after Buffett confirmed that Berkshire in April sold its “entire positions” in the four largest: American Airlines Group Inc, Delta Air Lines Inc, Southwest Airlines Co and United Airlines Holdings Inc.

Buffett said he “made a mistake” investing in the sector, which the pandemic has changed “in a very major way” with no fault of the airlines, leaving limited upside for investors.

“It is basically that we shut off air travel in this country,” he said.

The meeting was devoid of the surrounding three-day weekend of dining, shopping and other celebratory events that annually draw tens of thousands of people to Omaha for what Buffett calls “Woodstock for Capitalists.”

Vice chairman Ajit Jain, 68, who oversees Berkshire’s insurance businesses and is also considered a possible CEO candidate, was also absent from the meeting. Abel lives closer to Omaha than Munger and Jain.

Berkshire has said its board of directors knows who would become CEO if Buffett died or became incapacitated.

Abel told investors “I don't see the culture of Berkshire changing” after Buffett and Munger are no longer there.

He also said Berkshire was likely to expand its workforce, which totalled 391,539 people at year end, even though somsomesinesses have furloughed employees and cut salaries sinsincee pandemic began, and could start resorting to layoffs.

Berkshire wouldn’t be alone. Nationwide jobless claims have surged to about 30.3-million, 18% of the workforce, a level not seen since the Great Depression.

Abel nonetheless said that in five years, “we see our employment numbers being far greater than they are today.”

Death might be a beach as Californians flock to the sea

As a response to the crowds, despite the Covid-19 restrictions, the governor will close all beaches and parks in the state from May 1
World
1 year ago

A research model often cited by White House and health officials revised its projected US Covid-19 death toll upwards to over 74,000 by August, from ...
World
1 year ago
Next Article