GOP vs Dems: US is back to ‘normal’ after Covid-19 relief package 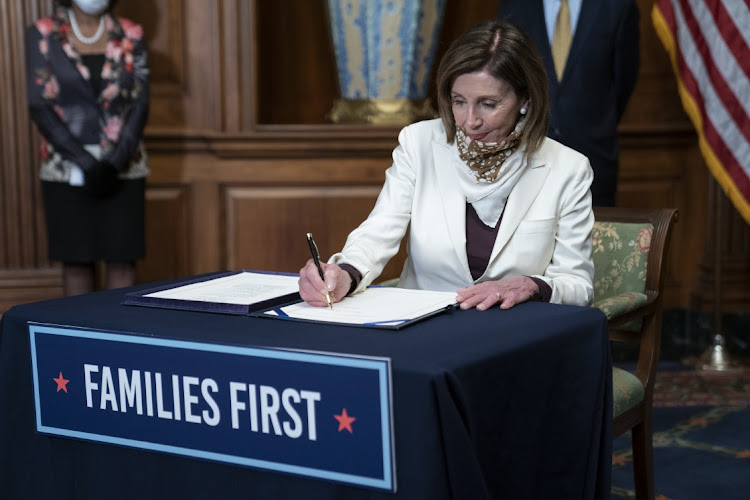 Washington — After passing $3-trillion of coronavirus relief in a rare seven-week run of bipartisanship, the US Congress is headed back to its normal state of conflict, with leading Republicans lining up against aid for cities and states that Democrats say is essential.

Spurred on by governors and local officials, Democrats have put out the word that they want to provide a sizeable rescue package as part of a broader bill — one that could total at least $2-trillion in coming weeks.

Their agenda has some Republicans seething, with Senate majority leader Mitch McConnell telling conservative talk-radio host Hugh Hewitt on Wednesday that he “would certainly be in favour” of letting states enter bankruptcy rather than send them cash.

The leading US Democrat, House of Representatives speaker Nancy Pelosi, shot back on Thursday, saying: “Oh really? What made you think that was a good idea?”

Some governors called it a recipe for collapsing the US economy if Congress allowed states such as Michigan and Illinois to declare bankruptcy.

The tit-for-tat continued, when Republican President Donald Trump, who is seeking re-election in November, noted during his daily coronavirus briefing on Thursday: “It is interesting that the states that are in trouble ... happen to be Democrat.”

The infighting came as US coronavirus cases approached 900,000 late on Thursday, with more than 50,000 deaths. There are fears that even if the pandemic is soon tamed, a second wave could hit in late 2020.

It is not just Democrats clamouring for more aid to states as their revenues plummet during an outbreak that has sent unemployment soaring as efforts to combat the pandemic have closed many businesses and left Americans sheltering in their homes.

Republican governor Larry Hogan of Maryland, who chairs the National Governors Association, joined with vice-chair Andrew Cuomo, the Democrat governor of New York, in calling for “robust support from the federal government”, in a Tuesday letter to congressional leaders. Republican senator Rob Portman of Ohio echoed that call.

But all week, many Republicans attacked Democrats for insisting on the state aid, saying it delayed passage of help for small businesses. Citing new unemployment figures, House minority leader Kevin McCarthy said during a House debate on Thursday: “For those 4.4-million Americans who were laid off during the week, Congress owes you an apology. You did not have to have that happen.”

With so much dissension, one senior Senate Republican aide wondered whether any legislation could surface any time soon. Instead, he suggested the possibility of Congress persuading the US treasury department to loosen some rules on existing funds that states could then better access.

But a second senior Senate Republican aide, who also asked not to be identified, sketched out a scenario in which lawmakers and the White House could be forced into a fast-track negotiation.

On Thursday, Congress completed work on a $484bn emergency bill allowing more federally backed loans to small businesses. The second aide said that even before Trump could sign it into law, estimates swirled around Washington that this money could be gobbled up within a week. If yet another small-business bailout was urgently needed, Pelosi could then be able to get Republicans back into deal-making mode and push for the state aid.

At the same time, the environment could be ripe for Trump and Pelosi, following three years of sputtering negotiations, to agree on a huge infrastructure investment plan for roads, bridges, rural broadband and other public works projects.

“If you’re spending another trillion dollars, unpaid for,” the staffer said, “Republicans would rather spend it on infrastructure than on direct aid to prop up states.”

Economists are forecasting that as many as 25-million jobs were lost in April after the economy purged 701,000 positions in March
World
11 months ago
Next Article