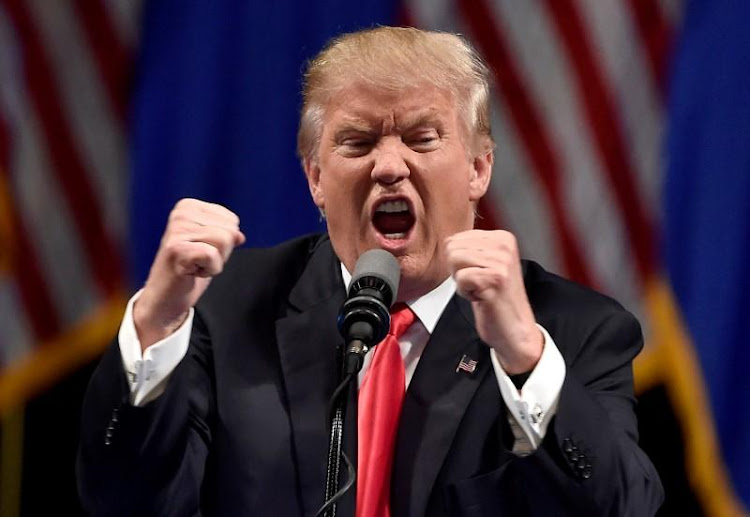 San Diego/Washington — President Donald Trump brought his fight with California to a boil during a two-day visit, casting the state as a cautionary tale for Democratic rule ahead of the 2020 election.

In a matter of 48 hours, Trump singled out California for its burgeoning homeless problems, moved to eviscerate its authority to regulate auto emissions, and stopped at the border wall, highlighting his disdain of its policy of offering sanctuary to undocumented immigrants.

It is unusual for a president to wage a pitched battled with a single American state. But California’s liberal leaders have emerged as a favourite foil for the president, and he has sought to exploit the state’s struggles with homelessness and housing for his own political benefit.

“You can’t let Los Angeles, San Francisco and numerous other cities destroy themselves by allowing what’s happening,” he told reporters on Tuesday aboard Air Force One. He reiterated his complaints about California cities’ approach to the homeless on Wednesday.

And as Trump flew back to Washington late on Wednesday night, he announced that the Environmental Protection Agency would issue a notice of violation within a week to San Francisco, alleging that the city’s homeless population had increased ocean pollution “because of waste, including needles going through storm sewers”.

Trump told reporters there was a “tremendous” amount of pollution entering the ocean around San Francisco because of the homeless. He did not provide any substantiation for the claim.

“They have to clean it up,” Trump said. “We can’t have our cities going to hell.”

The city of San Francisco said earlier in 2019 that its homeless population was 8,011, a 17% increase from 2017. Most live on the streets, according to the city; only about 35% are sheltered.

The president’s comments build on attacks he has made in recent months on Democratic political leaders in the country’s largest cities. He is seeking to motivate Republican voters in rural and suburban areas by warning them that Democratic leadership leads to crime and poverty.

In California, Trump largely stayed out of view as he shuttled from the Bay Area to Los Angeles and San Diego for campaign fundraisers. There were no meetings with the state’s Democratic elected leaders.

His only official public event on Wednesday was a visit to a segment of a recently constructed border wall near San Diego. “We’re building it at a breakneck speed,” he said. “It’s a very powerful wall.” The president signed his name on the barrier.

Trump said if he charged 5% tariffs on goods crossing the border from Mexico, that would pay for the wall. But he said he doesn’t want to take that step because the country has acted to stem the flow of migrants.

Over the course of his California visit, Trump and his administration targeted state policies.

He said he would revoke California’s ability to regulate greenhouse gas emissions from vehicles — an authority the state’s leaders say is needed to combat air pollution and climate change.

Conflict between Trump and California has become a hallmark of his presidency.

In August, he accused Hollywood studios of releasing “dangerous” movies he said had fuelled mass shootings across the country. In 2018, the president accused California of using poor “forest management” practices that contributed to deadly wildfires.

Trump has repeatedly cast doubt on man-made climate change, an issue that has energised the state’s politics for the past decade.

The state government has filed more than 50 lawsuits and other protests over some of the Trump administration’s signature initiatives, including immigration crackdowns, environmental deregulation and infrastructure policy.

California attorney-general Xavier Becerra said he would sue to block the Trump administration from revoking its ability to enforce stricter fuel standards.

Speaking at a news conference about automobile emissions, Newsom on Wednesday accused Trump of “assaults” on his state.

“I just don’t wake up with a clenched fist every morning. I don’t. I want to work with the president,” Newsom said. “But in the absence of that, we’re going to push back when he tries to go after our dreamers, and go after access to reproductive rights, go after our diverse communities, and we’re going to have the backs of people of the state and our values.”

In its rejection of federal homelessness funds, Carson said California has wrongly tolerated so-called sanctuary cities, which prevent their police from co-operating with federal immigration authorities. Those policies encourage undocumented immigrants to travel to California to take advantage of government resources that could be used to shelter the homeless, Carson said.

Trump has long castigated California over sanctuary cities and even claimed it could be a winning issue with Latinos, even though polls show widespread opposition to his immigration policies among those voters.

“Plenty of people — even in California where they have sanctuary cities — they don’t want sanctuary cities,” Trump said at a Monday campaign rally in Rio Rancho, New Mexico.

Newsom showed no sign that he is prepared to back down in his opposition to the administration.

Newsom also faulted elected Republicans for not standing up to Trump, accusing them of hypocrisy.

“I don’t know what the hell’s happened to the Republican Party,” the governor said. “They’re nowhere to be found.”

The Trump feud has also paid political dividends for the governor, who has used the conflict to rally his liberal supporters. Newsom’s campaign sent a fundraising appeal shortly after the administration announced its emissions decision.

“This morning, Donald Trump and his administration revoked California’s auto emission standards, completely roadblocking our progress toward cleaner air and a stronger economy,” the e-mail reads. “This isn’t a loss — we will fight back and we will prevail.”

But Iran has again denied involvement in the weekend’s drone attack on an oil processing plant, which initially knocked out half of Saudi production
World
2 years ago

US leader says he does not want war with anyone, investigation into Saudi oil attacks under way
World
2 years ago
Next Article

NEWS ANALYSIS: US and China to resume trade talks, but things will never be the ...

NEWS ANALYSIS: US and China to resume trade talks, but things will never be the ...