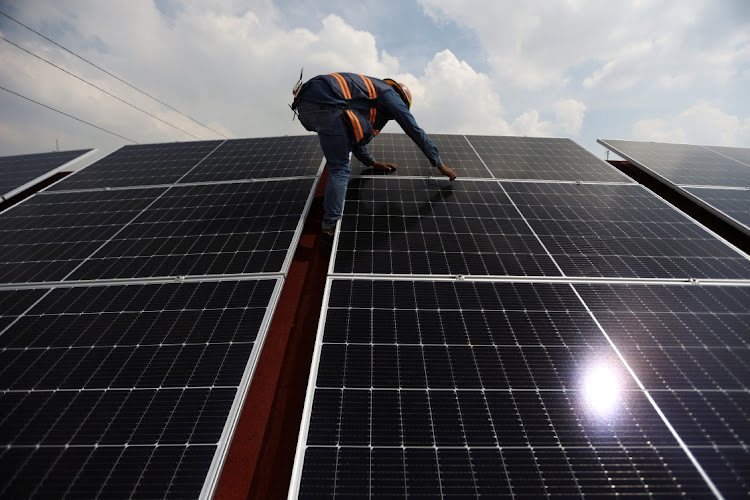 Bulawayo — People in Zimbabwe are used to taking cold baths during lengthy power cuts, but Cosmas Ndlovu’s new home means his family are among the fortunate few who can enjoy hot water at all hours.

When the 48-year-old built his house three years ago, he had to include a rooftop solar water heater to comply with a 2019 law that banned the installation of electric heaters in buildings.

While the father-of-five said the 150l-capacity heater — which directly absorbs the sun’s warmth to heat water — was expensive, at the equivalent of about $410, he believed that it had proved a worthwhile investment.

“Once the water is heated in the solar geyser, it takes two days before it cools down,” Ndlovu told the Thomson Reuters Foundation at his home in the Pelandaba West district, a newly established suburb not yet been connected to the grid.

“Warm water never runs out. I can have a hot bath even in the middle of the night,” added Ndlovu, who has installed three solar panels as well to power his lights, television, stove and refrigerator.

As Zimbabwe’s grid struggles with increased electricity demand, including as new housing projects are added, the government is emphasising the need for renewable energy and for thermal solar water heaters in homes and buildings.

Zimbabwe has in the past endured severe electricity blackouts that last up to 18 hours as a result of drought reducing dam levels at its main hydropower plant and breakdowns of coal-fired generators.

While Zimbabwe is on a drive to boost solar power — to cut electricity import costs and combat climate change — renewable suppliers, energy experts and builders warn that the expense of putting such systems into place is a barrier to their use.

Lawrence Mashungu, a climate change expert at the ministry of environment, water & climate, said the government was not offering funds for people to install solar heaters but “was providing advice” about their cost-saving merits.

Zimbabwe’s energy minister Gloria Magombo, however, said the government was considering subsidies for new housing developments that adopt solar water heaters, as well as a programme that would see banks provide loans to install them.

“Already, most new housing developments have adopted solar water heaters, which is very positive,” she said in an interview.

The nation has a target of installing at least 250,000 solar water heaters in old and new buildings by 2030. However, the government said it had no data on how many were in place.

Under the 2019 law, new buildings that do not have solar water heaters cannot be connected to the grid, and offenders can face a fine and up to a year in prison.

Zimbabwe has an installed electric capacity of about 2,000MW, with Kariba hydropower dam producing over half of that energy, according to its president.

Coal plants and imported power from Mozambique and SA provide much of the rest of the country’s electricity, with coal capacity growing.

But renewable power also has a role to play, with the government having vowed to cut its energy-related emissions by about a third by 2030, mainly by boosting investment in hydropower and solar power.

For underserved communities with no previous access to warm water except by heating water in pots, this technology is life-changing.

It has set a target to generate at least 2,100MW of clean energy by the end of the decade, of which 75% would come from solar, according to the country’s 2019 renewable energy policy.

Import duties have been removed from solar energy-related projects, while Magombo said the government was supporting local manufacturing of heat-absorbing rooftop water heaters and promoting their benefits.

Ultimately, the use of the technology should reduce household energy consumption by 20%-40%, the official added.

The government also said last month it is implementing a net metering system, whereby people whose homes have rooftop solar panels can sell their excess energy to the national grid.

“For underserved communities with no previous access to warm water except by heating water in pots, this technology is life-changing,” he said.

Hawkflight Construction, a company based in Bulawayo, said the solar water heaters were an extra expense for buyers at a time when the cost of building houses was already rising — but he emphasised the longer-term benefits of the technology.

"(There is) only a cost at the implementation stage, but thereafter it is a lifetime benefit,” said Martin Moyo, the land developing and building firm’s operations manager.

Pelandaba West resident and public servant Nhlalwenhle Mqhawana said she had not been able to afford her $400 heater outright and was instead paying for it in monthly instalments.

But the 39-year-old said her family had since saved about $20 a month as they no longer had to pay for gas cylinders to heat water.

In mid-July, Zimbabwe’s state-owned power utility warned there would be an increase in blackouts due to high demand for electricity and import constraints.

But the power cuts are of no concern to Ndlovu’s family.

“My household doesn’t know what load-shedding is because my entire home is connected to a powerful solar system which is running the refrigerator, television and the stove,” he said.