Mukhtar Robow, who split from the Al-Qaeda-linked group nearly a decade ago, was released from detention a day before the announcement 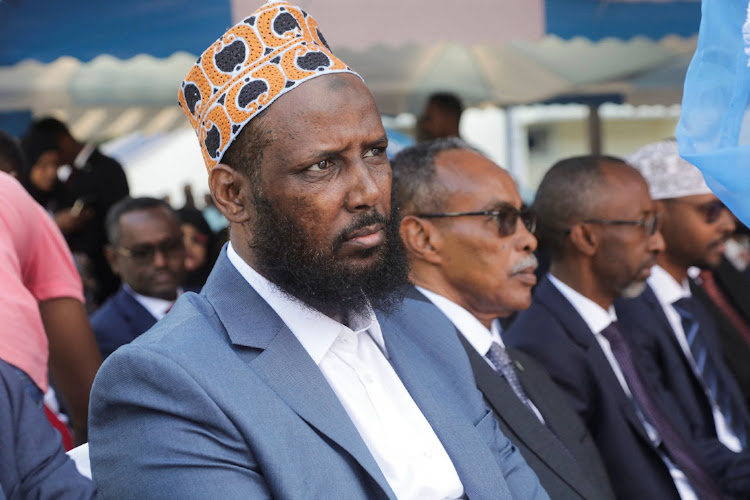 Mukhtar Robow sits among colleagues after he was named as the minister in charge of religion by Prime Minister Hamza Abdi Barre in Mogadishu, Somalia, August 2 2022. Picture: FEISAL OMAR/REUTERS

Mukhtar Robow, also known as Abu Mansour, had a $5m US bounty on his head after he cofounded Al-Qaeda-linked al-Shabab and served as the group’s spokesperson.

Al-Shabab insurgents have killed tens of thousands of people in bombings in their fight to overthrow Somalia’s Western-backed central government and implement its interpretation of Islamic law.

Robow split from the group in 2013 and publicly denounced al-Shabab when he came to the government side in 2017.

But the relationship soured after he grew too politically powerful. Somalia’s previous government arrested Robow in December 2018, when Somali government forces supported by AU forces from Ethiopia detained him in the Somali city of Baidoa. He was campaigning for the regional presidency of southwest state.

He was released a day before the announcement.

Security forces shot dead at least 11 people in the protests that followed, sparking criticism from the UN.

Robow’s new job sparked a flurry of hashtags on Twitter crowing he had made it #FromPrisonertoMinister. He had been held under house arrest until recently.

His appointment could help strengthen government forces in his native Bakool region, where insurgents hold substantial amounts of territory but where Robow also commands support. Or it could fan flames with the region’s president, who sees him as a political rival.

“We welcome his appointment. The move will advance reconciliation and will serve as a good example for more high level al-Shabab defections,” said political analyst Mohamed Mohamud. “Al-Shabab members who might be thinking of surrendering ... can dream of serving their country at the highest levels.”

New President Hassan Sheikh Mohamud, elected by MPs in May, has promised to take the fight to the insurgents after three years in which his predecessor, consumed by political infighting, took little action against al-Shabab.

That allowed the insurgents to build up substantial reserves of cash and carry out attacks over a wide swathe of Somalia. Last week scores of al-Shabab fighters and Ethiopian security forces were killed in clashes along the two nations’ shared border.

Ugandans and Kenyans generate wealth in countries including SA and launder the proceeds to a rebel group in the DRC that’s sworn allegiance to IS, ...
News
3 weeks ago