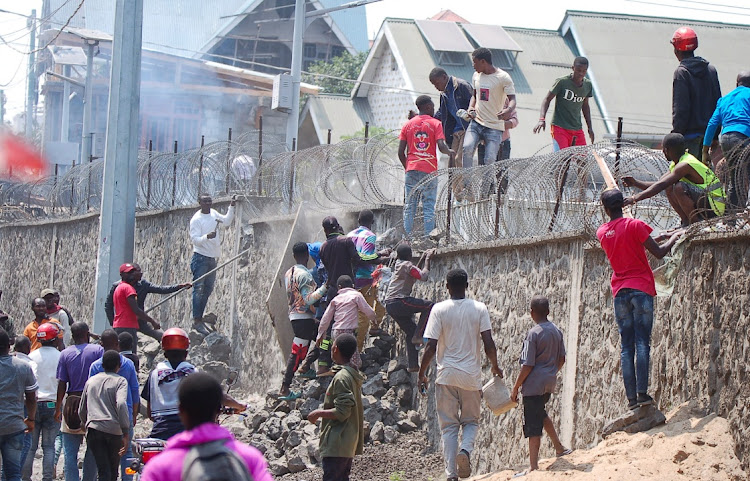 Congolese protesters scale the perimeter wall of the compound of UN peacekeeping force's warehouse in Goma in the North Kivu province of the Democratic Republic of Congo, July 26 2022. Picture: ESDRAS TSONGO/REUTERS

Kinshasa — Soldiers returning from leave to a UN intervention brigade in the Democratic Republic of Congo opened fire at a border post, leading to an unknown number of deaths, the UN peacekeeping force said on Sunday.

The incident at the border between the DRC and Uganda in Kasindi in the restive eastern part of the country is the latest involving the peacekeeping mission in DRC, known as Monusco, which has come under pressure from days of protests.

It was not clear why the soldiers opened fire.

“This serious incident has caused loss of life and serious injuries,” Bintou Keita, special representative of the secretary-general of the UN in the DRC, said in a statement.

Keita said an investigation had begun and the suspected perpetrators arrested.

“Faced with this unspeakable and irresponsible behaviour, the perpetrators of the shooting were identified and arrested pending the conclusions of the investigation which has already started in collaboration with the Congolese authorities,” she said.

She added contact had been made with the country of origin of the soldiers so that legal proceedings can be initiated urgently. She did not name the country.

Since protests began last Monday, at least 20 people, including three peacekeepers have been killed. when hundreds of people attacked and looted a UN warehouse in the city.

The protests took place in the eastern cities of Goma and Butembo, authorities have said.

The dead included demonstrators and UN personnel as UN sites were attacked by crowds. India’s foreign minister said two of the peacekeepers who died were Indian. The third was Moroccan, authorities said.

The protests were spurred by complaints that the mission has failed to protect civilians against militia violence that has raged for years in the region.

Ugandans and Kenyans generate wealth in countries including SA and launder the proceeds to a rebel group in the DRC that’s sworn allegiance to IS, ...
News
3 weeks ago

Congo and Rwanda agree at Angola talks to ease hostilities